Ideas do not count for much. You might hate this but you better lump it. For it really is the will of the people. Of those who count, not the ones we hear in TV studios. Not People Like Us 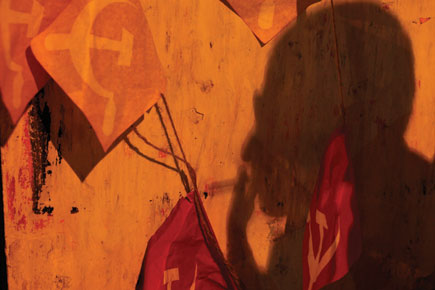 You might hate this but you better lump it. For it really is the will of the people. Of those who count, not the ones we hear in TV studios. Not People Like Us


Poribarton is the word we will hear a lot of for a while. The defeat of the Left in West Bengal has been reduced to this single word, a desire for change so strong that even though most people do not seem to believe that Mamata will necessarily improve their situation, they still want to see the Left out of power. This slow defeat of the Left, long in coming, is the last whimper of ideology in Indian politics. The BJP had long renounced its pretensions to such a claim, the DMK, a party born on a rationalist, secessionist, anti-Brahminical platform, has long morphed into a local imitation of the Congress, with its own cult of family.

But ideology is a big word; ideas can be smaller and more focused—the promise of good governance, a programme for roads or education or health or even administrative accountability. Neither Mamata nor Jayalalithaa nor the winners in Kerala or Assam have won for these reasons. This would seem to suggest there is considerable merit in what we saw in the days leading up to the elections. We were bombarded with images in the media questioning the relevance of politics as usual in this country. Anna Hazare’s fast against corruption was proclaimed another satyagraha to reclaim our nation, and it gathered support from a whole host of those who claimed to be the true representatives of the people. With television studios for company, these people announced that the political establishment in this country could not be trusted, that the systems that operate are redundant.

Yet, the only thing that the elections in the four states have in common apart from their lack of ideas is a high voter turnout. How do we account for this paradox? If politics with its lack of ideas is so dispiriting that we need outsiders to inject ideas through fasts, why is it that the voter does not think so, and why is there such disconnect between the pontificating political discourse in Delhi and what actually unfolds in elections in this country?

The answer lies with those who actually vote in an election. This requires us to first return to the Indian paradox, that it is precisely those who are poor, historically marginalised and semi-literate who turn out in the highest numbers. This is a fact we take so much for granted that we never stop and wonder. This is certainly not the case in the only comparable democracy in terms of diversity, numbers and geographical spread—the United States, where historically marginalised groups turn out in far lower numbers than the general population.

The people in the US who are most involved in the democratic process are the ones who gain the most by it, actually just a little thought and some practical on-the-ground experience suggests that much the same is true of India. In the US, those who participate most avidly in the process are the White, educated and middle class, who are still the most representative of the US population; in India, the poor, the semi-literate and the depressed castes and tribes are actually the most representative of the Indian population, and it is only in this context that we can begin to appreciate why the process of politics in India matters so much.

The point is made starker by first considering why they have little or no chance of finding help or empowerment from institutions that we (largely the kind of people who would be reading this magazine) place so much hope on.

In a 1995 case related to the death penalty, the Supreme Court commuted the death sentence of a man who had raped and murdered a two-year-old girl but upheld the constitutionality of the death sentence. Former Supreme Court Chief Justice PN Bhagwati, in his dissenting judgment, argued, “There is also one other characteristic of death penalty that is revealed by a study of the decided cases and it is that death sentence has a certain class complexion or class bias inasmuch as it is largely the poor and the downtrodden who are victims of this extreme penalty… We would hardly find a rich or affluent person going to the gallows.” What is true of the death penalty is true of every judicial process. Even legal aid is an option only when a person is the accused; if he needs to pursue a case to obtain something that is rightly his, he has no chance of getting a lawyer. For the man we are talking about, the judiciary—as far as details that matter to him personally go, as opposed to structural issues that can be settled by the courts—may as well not exist.

The same class bias is even more telling when dealing with the executive. All of us (those who read this magazine and write for it) have had reason to seek recourse from the administration. It is mostly a process of searching for an acquaintance who knows someone who knows someone who matters. This is as true of getting a passport as it is of obtaining admission to a school for a child. And if this option fails, there is that last option, which we so happily decry but one that most of us participate in, whether in small or large measure, the ‘chai-pani’ that extends to the kind of corruption embodied in the 2G case. The privilege of our background, education and family connections, or the possession of money is what allows us to speed our way past the normal roadblocks in the system that the vast majority of those who vote have no way around. Even when it comes to appointing committees to draft, say, the Lokpal Bill, the elite, disgusted by our politics, has ensured the members are selected from its own ranks. For the vast majority that leaves one option.

THE POLITICS OF THE VOTE

In this corrupt Republic, in this country largely controlled by the elite (the top 20 per cent who show such a low turnout number in the millions, hence it is by no means an oligarchy), the one thing that is an equaliser is the vote. It is true that the very rich can game an election, influence it by their spending, which is why a bill on electoral funding must precede any attempt to curtail black money or corruption, but what is even more frustrating for the middle class is that it is on par with the vast majority of this country as far as electing a representative to the legislature is concerned.

If the poor line up in such numbers to vote in an election, it is because they know that the process of electing an MLA or an MP is the one time in this country when they are on an equal footing. They also know when they have a personal problem—access to a hospital, harassment by the police etcetera—they can turn to their MLA or MP, and even if the chances are slim, that is the best chance they have of influencing the system because even the MLA and MP know that it is these very people who will line up to vote when he next contests an election. This is no illusion: visit the house of MLAs and MPs in their constituency and listen to the demands of the vast majority of supplicants, and this truth will become obvious.

In his book The Black Swan, Nassim Taleb terms ‘our need to fit a story or pattern to a series of connected or disconnected facts’ the narrative fallacy. This is why we often see our election coverage restricted to one grand theme—poribarton or corruption or whatever you will. In 2004, the Vajpayee government fell ‘because the aam aadmi voted against them’ goes the claim, except that the poorest states in the country, Madhya Pradesh and Rajasthan, voted overwhelmingly for the BJP. The UPA won in 2008 because it supposedly catered to the aam aadmi—again a great story hardly borne out by any meaningful analysis of the elections.

The voter votes not for an idea or an ideology but for the possibility of individual benefit. This possibility is not as straightforward as accounting for the money, a television or alcohol handed out even though each counts. If roads matter, they will be weighed in, it is just that the importance given to each factor varies from individual to individual. And since the individuals whose aggregated vote decides most elections are not from the middle class, this class feels left out because its own individual benefit is often discounted in such a result.

This is a simple conclusion but one that irritates the elite no end. It may be true that the CPM and the DMK were both embodiments of certain ideas, but the response was not to an idea, whether it be the Marxism of the CPM or the atheistic Dravidianism of the DMK, but to the possibility that the old structures would change for the better, that they would have some access to the institutions of power. In the case of the CPM, this possibility was real for more than a decade but that changed with the creation of a new elite that controlled power. Mamata is not an idea, she is a possibility as easily accepted as renounced if things do not work out.

A DEMOCRACY OF POSSIBILITIES

It is easy to be cynical or sceptical about such a democracy but the fact remains it delivers in ways that the elite fails to anticipate. A Mayawati, Mulayam or Lalu are products of such a system, and for all the mockery made of them by the elite, they have changed the political landscape of the country. It is difficult to ascribe ideology or even ideas to the politics these three actually practice, but over the past 20 years, they have reshaped Bihar and UP by dismantling the hierarchy of caste.

The Congress has over time developed what can be best described as an optimal approach in such a democracy. It is a party designed to lurch in any possible direction, depending on voter expectation, unhindered by ideas or ideology. It is no surprise that the longer a party survives and bids for power, the more it tends to resemble the Congress—take the BJP or for that matter the DMK or the Akali Dal or even the Left. There may be legacies difficult to shed but in practice the shape each party takes is very similar. If the Congress has lost the huge appeal it once had, it is not because it has deviated from some ideal, it is because other parties have learnt to conduct their politics from the Congress.

This has not been a conscious process; it is the result of responding to the requirements of our democracy. When someone like Rahul Gandhi plays to the middle class’ expectations of what a leader should be, he could well be damaging the Congress’ ability to conduct its politics. As a prediction, await the result of the UP election, where Mayawati and the democracy of possibility is pitched against Rahul and the democracy of middle-class expectations (coupled, of course, with some overnight halts in Dalit huts). The results will tell us something about our democracy.