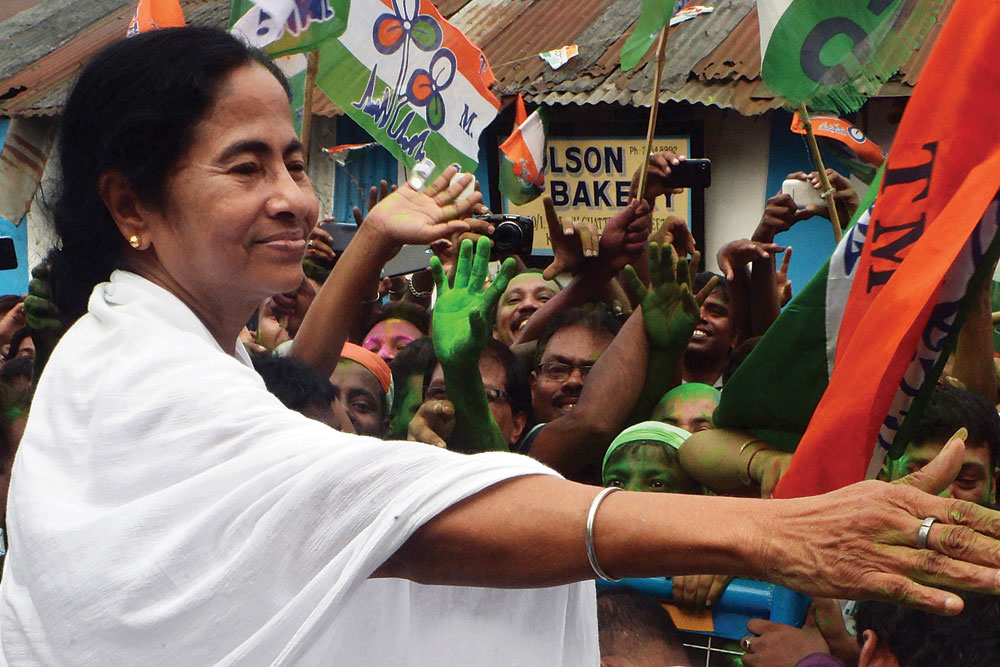 AT THE HEIGHT of the campaign for the seven-phased election in West Bengal, Mohammed Salim, CPM Politburo member and one of the key architects of his party’s ‘alliance’ with the Congress, had told me that he expected the ruling Trinamool Congress (TMC) to win not more than 134 seats in the state Assembly. He was convinced that Muslims were veering increasingly towards the CPM-Congress combine.

On 19 May, when the results showed a huge 211-seat victory for Chief Minister Mamata Banerjee and her party, Salim—a confidant of CPM General Secretary Sitaram Yechury who was overzealous in cobbling a ‘jot’ (tie-up) with the Congress despite stiff opposition from a section of the senior party leadership—spoke with a resigned tone: “We will go for a serious introspection of this defeat.” It was indeed a drubbing for the two parties that had hoped to defeat TMC by tapping what they saw as an anti-incumbency mood (which existed only in a few pockets, mainly in north Bengal). The no-holds-barred campaign against Mamata over corruption and crime failed to click in a state known for being politically conservative and has a history of re-electing incumbents again and again. The Left Front had stayed in power in West Bengal from 1977 to 2011. Under Yechury’s watch, the CPM has been reduced to a regional party (with sway only in Kerala). Salim says that the party will look at “where things went wrong, go back to the people and recruit young leaders as part of revamping the organisation”.

Expectations of the alliance’s prospects were so high that the Left Front-Congress tally of 76 in the 294-member Assembly evoked not only disappointment, but could demoralise the opposition which had campaigned against Mamata over what seemed like genuine grievances: TMC-affiliated ‘syndicates’ taking the law into their hands in rural Bengal and spiralling graft cases. The opposition parties had tirelessly highlighted the case of the collapse of a flyover on Vivekananda Road in Kolkata’s Girish Park area, and linked the accident that killed several people to syndicates controlled by TMC men who apparently supplied low-quality raw materials.

The results are proof that people of the state have rejected the monotonous ‘Mamata is corrupt’ campaign in the absence of a tall leader or a narrative to back the opposition’s poll aspirations. For the CPM, which hoped that the elections—held under the watchful eyes of Central forces and the Election Commission—were an opportunity to mobilise its dispirited cadres, this loss opens up a can a worms. The Left Front may have won fewer seats without an opportunistic alliance with the Congress, but it would not have lost face like it has, thanks to this alignment. “Looks like both hardcore CPM and Congress voters didn’t like the coming together of these parties,” notes a CPM leader who was part of the party ‘war room’. Yechury had peddled the Congress-CPM ‘seat sharing pact’ as a natural alliance that had emerged from the grassroots level, from the workers of the CPM and the Congress who joined hands to fight the might of TMC workers. He even went against the spirit of the party’s resolutions that favoured equidistance from the BJP as well as the Congress. The majority of Politburo members had rejected the West Bengal unit’s proposal. Yechury, however, batted for the poll arrangement now known as the ‘Siliguri Model’. It was in last year’s local elections in Siliguri that the Left and Congress joined hands unofficially to post a win. CPM leader Ashok Bhattacharya became Siliguri mayor, battering the TMC.

The outcome of the West Bengal polls, therefore, comes as a major embarrassment to Yechury, who seems to have bet big on the mathematical calculus of the alliance. In the 2014 Lok Sabha election, the combined vote shares of the Left Front and the Congress (30 per cent and 9 per cent, respectively) equalled the TMC’s 39 per cent. But then, the CPM as well as the Congress have been rapidly losing the support of poorer voters—Muslims, SC and ST groups. Mamata had wooed these sections through populist schemes and by warming up to minorities through symbolic gestures. Data show that 46 out of 294 Assembly constituencies of the state have a Muslim ‘concentration’ of more than 50 per cent. The figure is 40-50 per cent in close to 16 seats and 30-40 per cent in 33 seats, which means that in at least one-third of the seats in the state, the Muslim vote was the single most crucial factor.

The mood at Narayangarh Assembly constituency in West Midnapore district perhaps mirrored that of the entire state. It was here that CPM state secretary and opposition leader Suryja Kanta Mishra lost the election. ‘Daktar babu’ had represented Narayangarh since 1991. “It is a huge setback,” concedes Salim. For its part, the BJP, which won no seats in the 2011 Assembly election, also made gains despite the massive TMC victory, winning in three constituencies. It had gained an unprecedented 17 per cent vote share in the state in the 2014 General Election. Meanwhile, the CPM general secretary blamed the TMC of ‘transferring’ votes to the BJP in a few seats in West Bengal.

London School of Economics Professor Sumantra Bose notes that the Congress has gained relatively from the alliance arithmetic while the biggest loser in this election has been the CPM. “[The Congress] has largely held on to its pockets of strength in north and central Bengal, fortified by the addition of the Left Front/CPM votes in these areas, and has also got through in a small number of seats in southern Bengal where CPM voters have clearly turned out for the alliance’s Congress candidates. However, the reverse transfer of votes has not quite happened. In three-fourths of the 294 constituencies, the Congress vote is too negligible anyway to make a difference to the outcome,” Bose says.

Clearly, the Bengal poll triumph raises the stature of Mamata at the national level manifold. This election reversal means the largest Left party in the country continues to shrink in what has been its biggest stronghold ever.