‘We will use every provision in the Constitution to push reforms’ 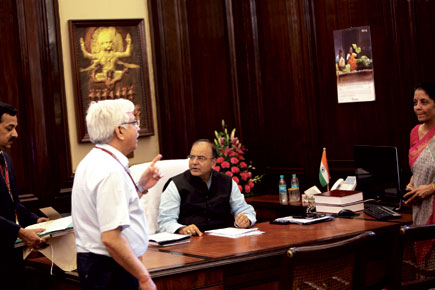 
Finance Minister Arun Jaitley is snowed under with work, meeting corporate hot shots over pre-Budget briefings, holding crucial discussions with Ministry officials in the run-up to what Prime Minister Modi describes as a “transformational” Budget, parleying with Sebi chief UK Sinha and several others. Over lunch he met Open’s Managing Editor PR RAMESH to share his ideas on reviving the Indian economy. Edited excerpts:

What is your assessment of the Indian economy?
The economy is in revival mode. Investors across the world and domestically now look at India differently. The series of reforms that the Government has undertaken has convinced the world that this Government means business. This is also coming at a time when, barring the United States, most other economies are experiencing a slowdown. I expect this year to end better than last year, and I expect next year to be significantly better. I am, however, not oblivious of the challenges. Bigger investments have to come in, manufacturing has to pick up significantly and investment in infrastructure has to increase.

When can we expect green shoots?
The green shoots are already visible. But they have been patchy. The green shoots have to become a pattern. And that is when I can say that our growth trajectory is much faster. We are moving up, and we have to move up a lot more.

Is the Indian economy in a sweet spot? Global oil prices are at a low, global liquidity is flush, domestic sentiments are rapidly improving…
There is evidence to suggest that the Indian economy is moving toward a sweet spot. Of course, global factors are contributing to it. But the right policies followed by the Government and the determination to take the economy forward will make it sweeter.

Would it be right to say that India is looking at a second life?
Even our adversaries are forced to admit that there is real change after the new Government took charge of the country. There is a decisive Government in place. When we took over, things were in a mess. Decisions were taken not in government offices but outside, by people who did not have the mandate to take those steps. Those running the country had given a free rein to extra constitutional powers that controlled the Government. The result was sub 5 per cent growth, low revenue collections and sharp decline in employment generation.

The decisions [taken] in the past few months are sure to put the economy on a high-growth trajectory. Even our adversaries will admit that this Government has undertaken more reform oriented measures than any Government in recent memory.

Are you disappointed that the RBI did not cut interest rates?
The RBI is a mature institution. Balancing growth and inflation is a part of its responsibilities. I am sure it is equally aware, if not more, of the real needs of the Indian economy.

Do you think the Indian economy is insulated against a global recession? Europe and Japan are failing to bolster growth and their economies appear to be getting worse. Russia and Brazil have been dogged by recession and China’s double digit growth has slowed rapidly.
The US economy is growing faster than usual. So far it appears that India is the other economy that is improving. The pattern that is effecting a slowdown in other economies is not visible in India.

You have said that you are not oblivious to challenges facing the economy. What are the downside risks to the Indian economy?
Well, there are some who [have] made obstruction to change, improvement and reform a part of their political activity. They can delay legislation but cannot eventually prevent it. A lot of decisions take place outside the legislative framework. We are determined to go ahead with both legislation and executive decisions. The challenge is to expedite investment.

You have been accused of bringing back the Ordinance Raj, legislation through decree…
Well, [an] ordinance is both parliamentary and democratic. The Constitution provides for it. Both Houses of Parliament have to approve it. We bring ordinances only when there is an element of urgency. And in the three ordinances that have [been] promulgated, there was extreme urgency. The changes that [have been] brought in the coal sector are aimed at facilitating a transparent and non-discretionary method of allocation of coal blocks. It will enhance the potential of the sector and cut down the cost of power.

But parties in the opposition have made obstructionism their principal tool of politics. If the Rajya Sabha is not allowed to function, the nation cannot stop functioning.

A related question—do you think the Government will have to rely on convening joint sessions of Parliament?
There is a constitutional provision [for it]. We will go ahead and resort to all procedures in the Constitution for legislating on the measures that we have planned.

Mamata Banerjee has said that her government will not implement the changes in the Land Acquisition Act. Your response?
Only the reality-challenged can support the Land Act of the UPA Government. Creation of smart cities, townships, industrial corridors, business centres, defence projects, cantonments, ports, nuclear installations, building of highways, irrigation projects and dams have long gestation periods. They cannot be completed in five years. If the provisions of the UPA bill were in place, they cannot be completed in five years. We would have been a nation of incomplete projects because of defectively drafted legislation.

But the West Bengal government has made it clear that it will not implement the new law…
They are free to mandate the state government not to use the provisions of the Ordinance. But in an era of competitive federalism, these obstructionist positions will only hurt the state. It will deprive people of the state of decent infrastructure facilities.

What is the progress on the rollout of Goods and Services Tax?
We intend to roll out GST, which will subsume most of the indirect taxes, from 1 April 2016. It is beneficial to the Centre, states, industrialists and manufacturers as it would bring greater transparency, better compliance, higher GDP growth and revenue collections. I personally spent considerable amount of time with state finance ministers on the issue and there is a broad national consensus [on it].

How do you define the Centre’s relationship with state governments, particularly those which are not controlled by your party or your allies?
Our government will not do anything that goes against the federal structure of the country. Our state governments have suffered a lot when the Congress was in charge at the Centre. The then Union Government looked at the political hues of a particular state before deciding on allocations. Several investment proposals were held up on flimsy grounds. Some arms of the Union Government like the Environment Ministry had become the main hurdle for development. The nation cannot afford such whimsical approaches.

In my interaction with state governments, I have been telling [them] that we will [strongly support] them in their efforts to attract investments and improve infrastructure.

And what has been the response of states?
There is a greater willingness to work together. As I have said, [this is a] time when states are vying with each other for fresh investments. Everyone knows that investors have a choice. They have a choice of which state to invest in. The attempt is to narrow down that choice to a particular state. No one wants to be a loser.

There is also a realisation that voters are not willing to be swayed by misery-mongering slogans or empty rhetoric.

What are your thoughts on the new National Institution for Transforming India (NITI Aayog)?
The 65-year-old Planning Commission had become a redundant organisation. It was relevant in a command economy structure, but not any longer. India is a diverse country and its states are in various phases of economic development along with their own strengths and weaknesses. In this context, a ‘one size fits all’ approach to economic planning is obsolete. It cannot make India competitive in today’s global economy.

You are just back from a ‘bankers’ retreat’ in Pune. What are your thoughts on banking reforms?
The Prime Minister has assured bankers that the Government will not interfere in the commercial decisions of banks. They will have the freedom to operate in a transparent manner. There will be no phone calls from the Government leadership dictating commercial decisions of banks. It was rampant when the UPA was in power.

You have said the economy has started picking up. When will it begin to rise?
It will pick up significantly in the next financial [year]. And thereafter, it will be on a growth trajectory.

Prime Minister Modi has said that your next budget will be a transformational budget.
Please wait for it. In the Government headed by Mr Modi, reform takes place on all 365 days and not merely on the Budget day.