We Are All Chinese in Some Ways

How much China we take in our everyday life 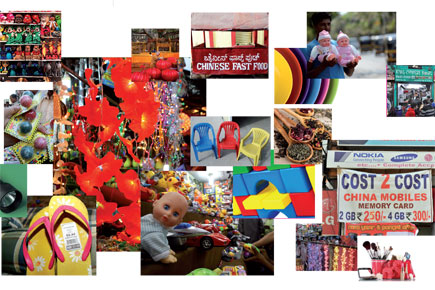 How much China we take in our everyday life

It is a 6 AM on a Sunday morning and 35-year-old Rakesh Kumar is setting up his shop for business in a makeshift bazaar on a sidewalk in old Delhi. Like hundreds of other hawkers, he makes his living selling cheap goods—anything from feng shui paraphernalia to cheap plastic goods, from nail cutters to toilet cleaners, to shoes, bags, cosmetics and clothes. It is no secret that India is one of the biggest importers of small commodities from China. Last year alone 360,000 Indian traders visited the country and bought home goods worth $780 million. “Chinese products have changed the way Indian consumers think. If you can get [something] at a cheaper price, why will you go for something expensive?” says Kumar who has been in this business for a decade, “Earlier it was just the decorative items, but now they supply everything based on demand and it is working. They even make idols, firecrackers and Diwali lights, how can someone compete with their prices? ” he asks, as customers start to pour in. It is not just middle-class housewives looking for a good deal, however. There are groups of youngsters scouring the market too, looking for cheap clothes. Harried mothers accompanied by their children, looking for their weekly steals. Kamala Sharma, 37, who comes to the market weekly, states that, “While growing up in a middle-class home in Delhi, I remember constantly wanting all sorts of fancy things that my parents didn’t have money to buy. Everything was so expensive. I was always envious of the other children with fancy things. My mother would take me to cheap Tibetan markets in the hills or occasionally to Nepal for bulk shopping. Today, I have to just step out and get anything that I need and it doesn’t even cost much.”

Sharma says that hers is a single income household that can get hard to budget for and that the only way she can fulfil all her family’s wants are through these weekly markets and hawker bazaars. She is not the only one. Newlywed Farah Bashir, 28, who is just setting up her home is at the market looking for goods to decorate her modest home in north-west Delhi. “You don’t necessarily have to say where you bought it. As long as it doesn’t look cheap, who cares,” she says, adding, “that I am done spending money on big brands when everything looks the same and no one can really tell the difference.” She was not always this way and spent a lot of money on things that she coveted. “I was obsessed with quality and about two years ago, after I’d spent almost half of my savings on a particular pair of sunglasses, I saw the exact same replica with a hawker for one-tenth the price. I felt very stupid at the time. They even had the detailing right. No one could’ve guessed it was a fake.” She has been shopping thriftily ever since. “The best thing about Chinese goods is that they are very trend centric. Earlier one had to rely on big retailers to bring home trends. But not anymore. If something is trendy, you will find it in one of these markets,” she says eyeing the food stall next to it selling cheap chowmein.

Meanwhile in Lajpat Nagar, the mecca of thrift shopping in the heart of South Delhi, the most popular hot spot remains the Chinese chaat corner: A small hole-in-the- wall food stall that has taken two of the most popular Indian food choices and fused them. Middle-aged women and families line the corner and chow down chilli chicken and fried rice with the same comfort that they reserve for aloo chaat and gol gappe. “The reason I love Chinese food is because it is the only international cuisine that tastes as good as ours,” say 42-year-old Amrit Kaur Dhillon as she waits for her platter to arrive. There are over 5,000 Chinese restaurants in Delhi and most of them serve inauthentic Chinese that is also popular as ‘Chindian’ or ‘Chinjabi’. “The adaptation of our flavours is what makes it so popular. From the variety to great vegetarian options that have cauliflower to cottage cheese to the thick gravy, there is something absolutely lovable about this food,” says 32-year-old Arshan Marwah, who professes that, “Chinese now feels like Indian.”

Outside the market, there is a lone rickshaw standing at the end of a busy road. Its owner, sprawled across it irreverently, is too busy staring at his small mobile phone screen to notice the blatant stares coming his way. Finally a girl walks up to him and asks gingerly, “Bhaiya, chalenge?” (Are you free?). After a couple of minutes, the man looks up at her, pulls out a ear phone from one ear and says, “Nahi, abhi hum kuch dekh rahein hain” (No, I’m watching something right now).

The mobile phone revolution is nothing new, but it is one of the small ways in which China has changed the way Indians live. This year alone over 12 Chinese handset brands have captured a little more than 10 per cent of the Indian handset market. Over 30 million smartphones are sold here annually, many of them being of Chinese make. “Their smartphones start from Rs 3,000 and go up to Rs 40,000,” says 42-year-old Atul Saxena who runs a shop in the mainland of Chinese mobile products in India—Gaffar Market, Karol Bagh. “It started almost five years ago with cheap replicas of popular phones that started doing the rounds, especially the iPhone. In an average week I sell at least up to 100 plus phones, most of them cheap smartphones.” Manufacturers in India are also importing Chinese goods and selling these under their labels (Spice phones, for example). In order to sell dual-SIM smartphones in India, China Wireless Technologies has tied up with Reliance Communications, India’s second-largest telecommunications service provider. “The fact that everybody has a mobile phone now wouldn’t have been possible without such mass imports at cheap prices,” says Saxena.

Delhi based trend analyst and market researcher Chanda Saxena says that this obsession with cheap products can be blamed on the rising aspirations of the middle- class in India and China’s ability to fulfill those at low prices. “There is no surprise really why so much of China is in our lives. They consistently deliver [to] their target audience things that they aspire to have, but at affordable prices. It is a win-win situation for everybody,” she says, adding that this market is only bound to grow. “For anything that there is, there is a cheaper, almost authentic Chinese replica. A consumer is not going to think twice where they get it from as long as they get it cheap.”