Unique to this part of the world, these feral horses are a sight to remember. Especially once you know the secret of their lineage 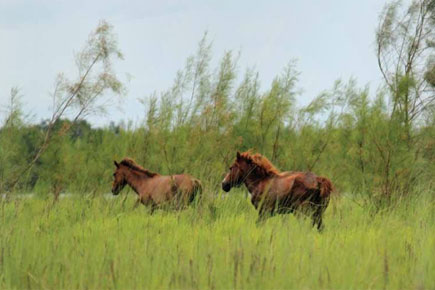 Unique to this part of the world, these feral horses are a sight to remember. Especially once you know the secret of their lineage


Not a soul stirs on this patch of the river island. The only sound that can be heard is that of the wind whispering softly through the trees. As the mist settles on the foothills of the Eastern Himalayas all around, a gentle drizzle attempts to break the placidity of the river water. “Come here, quickly!” our guide Gopal Rojaak’s voice pierces the silence. Quietly, I move up to where he is standing to check what’s getting him so excited. There, on another stretch of green in the middle of the river, I spy a herd of five handsome tawny horses, making quite the perfect wildlife calendar composition.

“They must be too far for you to take a photo, na,” says Pradeep Saikia, one of the forest guards accompanying us. And before I know it, he goes wading through the shallow water to get to the grassy knoll where these horses are enjoying an afternoon graze. They ignore Saikia for a moment, focusing on the grass instead. Not one to be discouraged by such a cold reception, he breaks into a wild jig of sorts right in front of them. Provoked, one horse finally rears his head. And that’s enough to set off a Tom-and-Jerry chase, with the rest joining in, across the watery landscape. The vision of five beautiful horses, their rich manes flying in the air as they gallop and splash their way forth, distracts us from the comical image of Saikia running helter-skelter, flailing his hands about to keep ahead.

“These horses are not used to much human contact,” grins Rojaak, enjoying every bit of this bizarre scene. These are no ordinary equines, I am told, they are the legendary feral horses of Assam’s Dibru- Saikhowa Biosphere Reserve. This unique floodplain, located 13 km from the heavily populated Tinsukia town in upper Assam, has the distinction of being the only place in India where this equine breed is found. “In fact, there are only a handful of places in the world—like Spain, Portugal, Australia and some parts of the United States—known to be inhabited by feral horses. But unique as they are, their mention always draws a blank from tourists. They have no idea what a feral horse is. It isn’t easy explaining that these are animals with domestic ancestors that were abandoned because of some disaster or calamity… and turned wild,” says Rojaak, delivering a very well-rehearsed lecture.

Feral horses baffle tourists but are of enormous interest to wildlife researchers and scientists. Not everyone gets an opportunity to study and observe these unique horses from such a close range. Just before visiting the sanctuary, I seek an appointment with Dr KK Dwivedi, deputy commissioner, Dibrugarh district. An avid wildlife photographer, he is considered something of an authority on the Dibru-Saikhowa reserve and exquisite flora-and-fauna on its numerous river islands. As the founder of the reserve’s only conservation society, he has done extensive research on the 500 species of birds, 104 kinds of fish, 43 varieties of reptiles, 105 types of butterflies and 680 species of plants found within the sanctuary.

Feral horses, though, are Dr Dwivedi’s dearest subjects. He has spent hours and hours in Dibru-Saikhowa just waiting to get a glimpse of a herd. “I was earlier the district commissioner of Tinsukia, and my house was very close to the sanctuary.

So, every weekend, I would arm myself with a camera and head off to the reserve. That’s when I found out about the horses. A 2008-09 survey pegged their number at 48. They usually roam about in herds of 10–15 and cover nearly 20–30 miles in a day,” he says.

Dr Dwivedi also turns out to be a treasure trove of information on these horses’ rich past. Way back in the 1940s, during the World War II period, Assam was one of the major theatres of war in South Asia. To conduct operations on the eastern front and stave off Japanese intrusions, the British had set up a series of camps in and around Tinsukia. “The ancestors of today’s feral horses were part of those camps,” he says.

Stories about these horses have been part of the area’s folklore ever since. Everyone in the district seems to be bubbling with anecdotes and tales of the war. “I must have been 15 or 16 at that time. I remember there used to be a soldier called Walker who was the political

officer in charge of the camp. His horse was the most majestic, beautiful creature I had ever seen. In fact, most of the horses in the camp were so well groomed that their shiny coats and polished hooves would dazzle the eyes. I used to wait for Walker to pass by my house on his horse,” reminisces 74-year-old Bhupeswar Ningda.

Our guide Rojaak too is full of war tales that seem handed down by his father and grandfather. Having grown up in a village located on the fringes of the biosphere reserve, he is well versed with every living legend about the river island. “That was the time when Stilwell Road was being constructed. These horses were mostly used for transporting supplies, rations and materials to various other camps,” he says. His helper Suntu, keen to join the conversation, quickly adds his little bit to the tale as well:  “These horses were also used in journeys across the hills that surround the reserve, to go to Burma.”

Once the war drew to a close, battle-weary troops began departing in large numbers, eager to be back with their loved ones. They took along only what they thought necessary. The horses that had served them through thick and thin were simply let loose, left to their own fate. Lost and confused, they escaped into the jungle. The locals could do little but watch in dismay, aware that they could not afford their upkeep even if they were to take charge of them.

“In August 1950, a huge earthquake struck Assam; the river changed its course, and these horses got cut off from the mainland. Today, the horses that you see in the reserve are the third and fourth generations of those from the World War II camps,” says Joynal Abedin, secretary of the Dibru-Saikhowa Conservation Society, who also runs an eco-tourism resort in the area.

It isn’t easy sighting these horses. One needs to leave the banks of the River Dibru in the wee hours of the morning and travel upstream in a motorboat. It is only after three hours or so, once the Dibru gives way to the Brahmaputra, that their habitat comes into view.

However, there is no knowing where the horses will be. Their wanderings have no detectable pattern, and they often cover large distances in a day. This explains why guides like Rojaak need to stay connected with a vast network of cattle camps or khutis pitched illegally within the reserve.

“Around 20,000 illegal cattle reside on this river island. The forest department is not equipped to drive them out, but [their minders] are a major source of information for these guides, as they know where the horses were sighted last,” explains Dr Dwivedi.

The best place for a sighting, all the same, is the Churkey Chapori stretch in the northern part of the reserve. On the evidence of recent trends, at least one herd makes it to this spot almost every day. “It is fascinating to observe them. During the day, these horses exhibit traits of wild horses, running around unfettered, moving from one place to another. But during the night, they sleep close to the cattle camps for safety reasons,” says Dr Dwivedi. It is this behavioural mix that fascinates curious travellers and wildlife scientists alike.

Majestic as they seem, not all of them are healthy. The emaciated look of some of the horses has many guides and locals worried. “They get ill from getting soaked in the rain too often; also, they have worms in their stomach from the mud they graze on,” says Rojaak, “We hope that the forest department and government make some natural-looking shelters where these horses can go rest. What’s more beautiful than seeing these animals in all their glory?”