Too cool for school

What happens when the ideal student goes bad? You get Adarsh Balak as an internet sensation 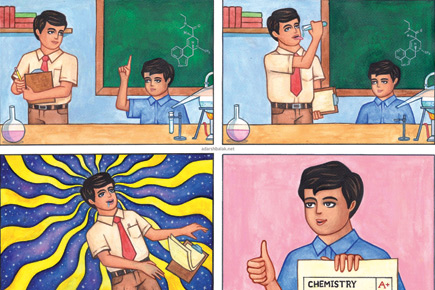 What happens when the ideal student goes bad? You get Adarsh Balak as an internet sensation

Almost a year ago, a poster featuring a young boy in a plain shirt, shorts and socks—his hair neatly combed back and rolling a joint—with a banner ‘T for Toke’ in Devanagari, went viral online. It was an obvious reference to the Barakhadi charts of the 80s and 90s that used to be hung across schools in the country, depicting a young boy—usually captioned ‘The Ideal Boy’ or ‘Adarsh Balak’—who did things that were supposed to be ‘good’. To have this icon of moral righteousness make a break for badhood is both devious and clever. The young artist behind the work, 23-year-old Mumbai- based Priyesh Trivedi, turned the poster into a painted comic series Adarsh Balak, which has become an internet sensation in the two months since it started.

“I always found the visual styling of the educational charts from the 80s and early 90s very amusing. The love for nostalgia and the archaic which most of us have is partly responsible for its popularity,” says Trivedi, who has given up a career in animation and is now devoted full-time to his comic strips. In this subverted world with textbook- style graphics, Adarsh Balak is shown vandalising walls with graffitti, offering a joint to his tired father, making LSD in a chemistry lab and sporting a Devanagari YOLO necklace. All the strips revolve around contemporary themes of social deviance.

The satire on classroom education has found resonance with a young audience, as most have been force-fed traditional values. Yet, as Trivedi points out, we have developed our own set of beliefs that stand in stark contrast with what society expects of us. “When I saw it for the first time, I laughed and instantly wanted to share it with my friends,” says 22-year-old Sahil Nagpal, an avid fan of the series.

The Facebook page for Adarsh Balak has generated over 37,000 ‘likes’. Trivedi has also started selling posters of the comic hero. Organisers of a recent concert in Mumbai got in touch with him asking if he would like to sell prints of Adarsh Balak art. At the concert, postcards were laid out on a table alongside a fishbowl for people to put in money. “I was there, but I didn’t make it obvious that I was the artist. I just wanted to see how people reacted to my art,” he says. He ended up selling all his postcards; and demand for his work is still rising.

The artist has adopted a traditional approach: he does all his paintings on paper and then scans them, thereby retaining their authenticity. His illustrations, he says, are mostly intuitive and arise from what he thinks might be cool. “It doesn’t necessarily need to have a deeper meaning. Some of them might, like the anarchy painting [which shows Adarsh Balak vandalising a wall while there is fire and destruction all around him]. I feel at some point everyone turns into an anarchist when situations get out of control. Sometimes it’s an individual revolution, sometimes it’s collective.” His work is inspired partially by the Spanish cartoonist and illustrator Joan Cornellà, famous for his surreal and unsettling comic strips.

Trivedi says he did not anticipate the kind of response that Adarsh Balak has generated. The series has become so popular that people are using his work on social media without attribution. Twenty-three-year-old Sharmistha Rao, for instance, has a T-shirt of the Toke poster along with a framed print for her room. Asked who the artist is, like many others, she does not seem to know. But Trivedi remains unperturbed . He has noticed an interesting trend. Now when someone posts his images on external sites, there are enough people who add a link to his Facebook page comments. He even has a few famous plagiarisers—Diplo, the American DJ and rapper, among them. Trivedi, however, accepts it all as part of his new celebrity status.