To Shoot a Messenger 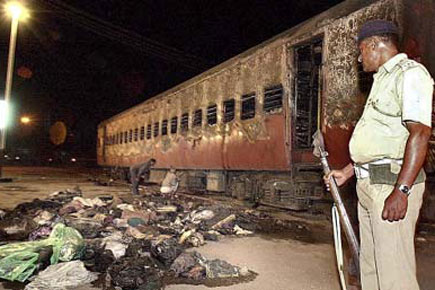 
The journalist who discovered and filmed the mass graves of some unknown victims of 2002’s post-Godhra riots, has attracted the attention of the Gujarat Police. Two car loads of the state’s policemen swamped the Bhopal residence of Rahul Singh early on 29 December to enquire about him. Rahul is the reporter who filmed the gruesome scene and skeletons five years ago. In Gujarat, the police said it wanted to question Singh as a witness, but the police’s approach in Bhopal suggests not.

Rahul Singh broke the story in December 2005 as a reporter of news channel Sahara Samay. He was not in Bhopal when the police came, as he has joined another news channel in Delhi. He says, “In December 2005, I found relatives of some of the persons from Pandarwara (Panchmahals district) who had gone missing since the 2002 Gujarat riots. They were introduced to me by Rais Khan, then an aide of human rights activist Teesta Setalvad and a coordinator of NGO Citizens for Justice and Peace (CJP).” “After 15 days’ hard labour, we found mass graves on the outskirts of Pandarwara village. These were not even proper graves, and skeletons were visible from [above]. From their clothes, many of the victims were recognised by their relatives.”

The Pandarwara story soon created a sensation. The Gujarat Police claimed that the skeletons were of those riot victims who were accounted for and were buried officially after a proper post-mortem, but local people and the CJP disagreed. Some of the relatives claimed that the skeletons were of those ‘still missing’ since the 2002 riots in the district. Amina Bibi, relative of one of the missing persons, approached the High Court in early 2006 requesting that the probe of the Pandarwara incident be handed over to the Central Bureau of Investigation (CBI). Though the case was not transferred to the CBI, the then single-judge-bench of Justice CK Buch accepted her plea for carrying out further digging operations under the CBI’s supervision.

Blood samples of relatives were also sent to the CFSL at Hyderabad, to find out if they were related to the skeletons uncovered. In its report, the laboratory found six blood sample matches for the skeletons.

The report strengthens the view that casualties in the Pandarvada riots were much higher than what the state government claimed. However, instead of chasing the killers, the Narendra Modi government filed an FIR against Rais Khan and six others for ‘illegally exhuming bodies with an intention to destroy evidence’.

The Gujarat Police next took action on the case only about a fortnight ago, after the Gujarat High Court lifted the stay on further investigation, which it had imposed four years ago. On 14 December, Panchmahals police arrested Rais Khan and three others, and produced them in court to seek their remand. The local court at Panchmahals remanded them to police custody for two days. This group of four had been arrested in 2006 too, but they had to be released as the High Court had ordered a stay on further investigation before they could be produced in court.

Rahul Singh now fears that he could become the next target in a witchhunt launched by the Gujarat Police in the name of causing damage to evidence. “Although I am yet to receive any arrest warrant, I am told by an Ahmedabad-based journalist friend that I have been made ‘co-accused’ in this case of alleged exhuming of bodies with an intention to destroy evidence,” he says.