To Seize a Mosque, Invent a University

As elections in MP approach, the Sangh Parivar is invoking Goddess Saraswati to lay claim to the Kamal Maula Masjid in Dhar 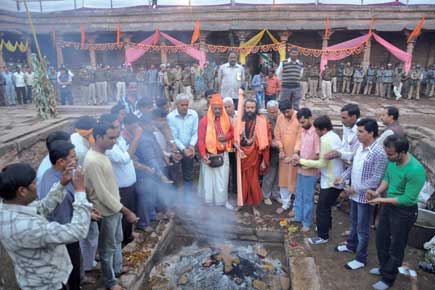 As elections in MP approach, the Sangh Parivar is invoking Goddess Saraswati to lay claim to the Kamal Maula Masjid in Dhar


Every few years, especially as elections approach in Madhya Pradesh, the Hindu Jagran Manch (HJM) remembers the Kamal Maula Masjid, a mosque in Dhar that is spuriously designated ‘the Bhojshala’, supposedly a centre of learning established by Raja Bhoj. Repeated demonstrations, ranging from mass mobilisations to attempts to storm the structure, have won the HJM—an organisation whose name has cropped up in connection with right-wing terror attacks and is loosely tied to the hydra-headed Sangh Parivar—the right to pray at the structure on Tuesdays and Basant Panchami. Muslims are allowed to offer namaaz every Friday.

This year, with elections due in MP, the situation was exacerbated by Basant Panchami’s falling on a Friday, 15 February. Since this coincidence occurs every few years, the compromise that has been worked out is that Hindus move out of the mosque by the afternoon to let Muslims offer Friday prayers. This year, the HJM was out in full force, with the Shankaracharya of Kashi Peeth Narendranath Saraswati making an appearance. While the state’s ruling BJP government claimed neutrality and let the administration act against the HJM activists, the facts indicate that Dhar’s Muslims were kept out of the mosque this year by the HJM mobilisation.

On 15 February, the state government machinery, through the Dhar PRO, released the photograph reproduced below to support the claim that Muslims were allowed to offer prayers at the Bhojshala complex even as HJM activists went on a rampage through town. It is worth a second look. It is clearly staged for the cameras, but there is far more that is wrong with the scene. The monument shown is not the mosque in dispute, it is an adjacent dargah.

This only adds to the increasing evidence that the HJM (in essence, the BJP) is trying to achieve control of the mosque by changing the very nature of the dispute. The same line has been fed to gullible Delhi journalists from otherwise liberal magazines, but this is the first time the state government has officially sought to do so.

A 2003 article in Outlook magazine read, ‘A Test In Revised History, A school built by Raja Bhoj and an abutting Sufi shrine are the latest progeny of Ayodhya’. It was written by Bhavdeep Kang, a journalist who was closely involved with the RSS-driven Uma Bharti election campaign at the time. Last year, Samanth Subramanian, in a profile of Subramanian Swamy published in Caravan, swallowed Swamy’s dubious claims and wrote, ‘On the grounds of the Bhojshala is a dargah, also several centuries old, one of its green-and-white walls pressing up against the sandstone perimeter of the Bhojshala. The local police and the Madhya Pradesh government have tried, with varying degrees of sincerity and opportunism, to regulate the entry of Hindu and Muslim pilgrims into this complex; at the moment, Hindus pray on Tuesday and on Basant Panchami, while Muslims pray on Fridays.’

I wrote a rejoinder in the magazine, but the damage done by these repeated assertions is evident. The debate has been expanded to this imaginary Bhojshala complex, and a dargah that has nothing to do with the dispute is being dragged in to ask if Muslims have unlimited access to this dargah, why can’t Hindus have unlimited access to the Bhojshala?

The monument under dispute is adjacent to the dargah, and as the accompanying photograph of HJM activists shows, this is an entirely different religious structure. The picture also indicates the leeway being granted to the HJM. Neither the adornment placed on the protected monument, nor the havan being offered at the centre is in keeping with the spirit of the order permitting their entry.

As for the status of the Kamal Maula Masjid, the matter came up before the MP High Court in 1998 .The Archaeological Survey of India (ASI) submitted a reply that the HJM finds difficult to contest because it was prepared under the supervision of a BJP minister at the Centre when the Vajpayee Government was in power: ‘…it is most humbly submitted that the factual identity of the present structure is not definitely known, nor can it be ascertained from the study of the structure itself… There is every possibility that the pillars and ceilings could have been gathered from demolished edifices around Dhar and being material readily available must have been put to use for the construction of the mosque of Kamal Maula…The actual location of the original Bhojshala remains a mystery which remains to be solved. It is reiterated most humbly that the structure presently under dispute was declared protected as Bhojshala and Kamal Maula Mosque and so it remains protected till today.’

The ASI was forced to concede that the structure is architecturally a mosque. In an article published last January in Journal of the Royal Asiatic Society, Michael Willis of the British Museum has traced the history of how the mosque came to be referred to as ‘the Bhojshala’. He takes note of various British observers who wrote about Dhar and the mosque.

In 1822, John Malcolm first noted the ruins of Dhar’s mosque without making any mention of the Bhojshala. It was almost 50 years later that the German archaeologist Dr Alois Anton Führer wrote, ‘The dargâh of Maulânâ Kamâl-ud-dîn, built during the reign of Mahmûd Shâh Khiljî I, in AH 861, has a spacious quadrangle with a colonnade of very fine Jaina pillars on each side within the square, and some are very elaborately sculpted in a similar style as those in the Dailwârâ temples at Abû. The floor is formed of black stone slabs from which Sanskrit inscriptions of the 12th century have been effaced. The mihrâbs and mimbar of the masjid proper are very handsome. On two of the columns supporting the central dome of the masjid are inscribed a couple of grammatical sûtras, which show that they were probably part of a scholastic building.’

This observation, which is more conjecture than assertion, also terms the monument ‘a masjid’ and is the first to suggest a ‘scholastic building’, even though it makes no mention of Bhoj in any way. It was only in 1902 that the first references to the local usage of ‘Raja Bhoj ka madrassa’ surfaced. This was soon after the British set up a small archaeological department in September 1902 and placed it under the charge of KK Lele, superintendent of state education at the time.

Willis notes, ‘The basic conundrum for Lele was that if the mosque at Kamāl al-Din was going to be explained away as a re-used Hindu building, then some sort of Sanskrit basis had to be found for ‘Bhoja’s school’, the designation ‘Rājā Bhoja kā Madrassa’ being too manifestly Urdu to serve his purpose. Lele addressed the problem by inventing the term ‘Bhojśālā’. While this was a clever bit of Sanskritisation, it had no basis in common parlance or the architectural types known from śilpa-texts. A dharmśālā was and is a well-known place of refuge for pilgrims, and there are various functional buildings called śālā, such as those used by washer men (dhobiśālā). But there is no such thing as a Sanskrit śālā (that would be vidyālaya, vidyāpitha or jñānapitha) and no śālā named after a king. Lele coined the term to provide the descriptive terminology he needed for the pillared colonnades of the mosque and so advance the idea that the building was indeed an old structure put to new use by Muslims.’

Further, ‘Although Lele busied himself with promulgating the idea that the mosque was the Bhojśālā, and had some success in this as we have seen, the proposal did not meet with universal acceptance. In Luard’s landmark Gazetteer of 1908, the buildings of Dhār are described and ‘Bhoja’s school’ duly noted. Because the statements that appeared in this publication were well-researched and represented an official government record, they have been repeated in more recent gazetteers and have enjoyed popular currency. This happened even though Luard openly stated that the name ‘Rājā Bhoja’s School’ was “a misnomer”. Why Luard did not simply suppress the misnomer may be explained by the fact that his Gazetteer was meant to be an up-to-date account of realities on the ground, not a definite historical assessment.’

This then is the concoction at the core of the current dispute. Willis concludes his meticulous paper by noting, ‘Indology badly done and contaminated by the imperial project may be the source of the Bhojśālā imbroglio and the basis of an entirely false religious tradition, but that, however deserving of condemnation, does not destroy the validity of Indology as a discipline. In this essay I have attempted to show that Indology, i.e. the comprehensive examination of sources, has power to bring us closer to the historical realities of medieval India.’

Willis also notes that the ‘legal and political wrangles, not to mention a steady flow of inflammatory assertions, have formed a toxic backdrop to the scholarly publications cited in the pages that follow.’ While he can afford to sidestep these, we in India cannot. Much like the misuse of Indology in British times, bad journalism and a compromised official machinery are being used to spread lies that serve as a communal basis for the Sangh Parivar’s political campaign. We can only expect to see more of this as the year unfolds and MP polls draw near, but, as in Ayodhya, the historical facts are not in dispute. The structure in question is a mosque. It was never anything else.