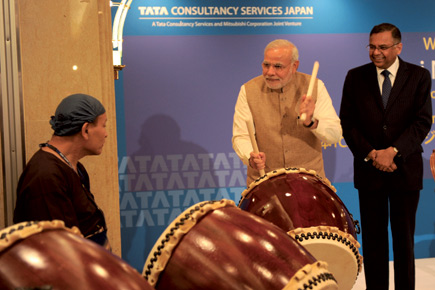 For the Japanese imperialists of World War II, India was the ‘bird of gold’ and their designs on the country then ruled by the British were well-known: they put prisoners of war to work building an unsuccessful railway network from Kyoto to Calcutta. The Japanese then thought India would be the launch pad for their expansionist dreams. More than 70 years later, the two nations—Asia’s second and the third-largest economies— have an entirely different spark for each other as their interests conform nicely: to join hands to drive economic growth and to combat neighbour China’s hegemonistic designs.

The five-day tour of Japan by Prime Minister Narendra Modi has brought to the fore the mutual attraction between the two countries. While Modi needed Japanese funds and technology to upgrade his country’s woeful infrastructure and to put a sluggish economy back on track, his counterpart Shinzo Abe, also a nationalist, also had similar interests: to revive a slumbering economy by identifying new export markets amid a souring of ties with China, especially over geographical disputes and attacks on Japanese businessmen in the Middle Kingdom.

Following a diplomatic coup of sorts—replete with warm hugs, twitter diplomacy, temple visits, music and fun—Modi returned to New Delhi to call his trip a huge success, referring to the 3.5 trillion yen ($35 billion) promised by Japan to India through public and private funding over the five years for various works, including the building of smart cities and cleanup of the Ganga. “There has been talk about billions and millions. But there has never been talk of trillions,” Modi gushed. The quantum of funding came in as a big surprise even for the Indian Prime Minister who has, in less than 100 days of assuming the post, emerged as a strong Asian leader who parleys on equal terms with the likes of Abe, Russia’s Vladimir Putin and Brazil’s Dilma Rousseff. In fact, over the past several years, Japan has invested more in countries like Indonesia and Vietnam than in India. Besides, trade between India and Japan is less than a third of that between India and China. “Things are now set to change drastically. It is very visible in the chemistry that exists between Abe and Modi, two like-minded leaders who are also known as doers in their respective countries,” says an Indian diplomat. US military historian and author Edward Luttwak suggests greater emphasis on the quality of diplomats that New Delhi sends to Tokyo. “India’s diplomacy is severely under-staffed, but the Modi Government would have to do much more than just add officials while making sure that today’s high standards are preserved: it would have to add foreign-policy leadership, that precious commodity in which India has been lacking,” he proposes.

Renowned author and geopolitical expert Robert Kaplan explains the logic behind Modi’s euphoria on his return: “India and Japan are too far away from each other to threaten each other, and yet each is close to China, which is a rising great power. These geographical facts make India and Japan—both democracies— natural allies in the effort to balance Chinese power.” In fact, since the economic slowdown of 2008 that battered the US economy, China has been very assertive, raising claims on islands controlled by the Japanese. New Delhi, too, has often expressed concerns about Chinese troop movement and incursions along the border.

However, Walter Andersen, an India scholar and director, South Asia Studies programme at the School of Advanced International Studies, Johns Hopkins University, feels that Modi would like to avert any confrontation with China because his interests are purely economic. “Modi, as part of his larger Look East policy, is likely to try to develop closer relations with both China and Japan… I doubt if he puts it in a comparative framework (that is, by making one more important than the other).”

Andersen, the author of Brotherhood in Saffron, a definitive work on the Rashtriya Swayamsevak Sangh, goes on: “India is engaged in a very smart policy of hedging, moving slightly in one direction or the other to keep both [Japan and China] engaged in what is something of a competitive relationship to get good ties with India. Will increased arms (presumably from Japan) lead to an arms race in the region? I doubt it, as much of the arms will have a naval focus. Note the muted Chinese reaction to the arms deal and to Modi’s statement about assertive Asian powers. Also, note how the senior leadership in both China and Japan immediately extended invitations to him after his 26 May inauguration. I think they did this as they see a stable government in Delhi with a firm sense of Indian nationalism [as one] with whom they should have close ties.”

Michael Zhang, a Shanghai-based foreign policy analyst at China Market Research Group, a think-tank, disagrees. He believes that Modi’s choice to visit Japan to enhance economic ties before doing so with China is viewed in his country as symbolic of the Indian Prime Minister’s priorities. “India and Japan have now signed trade and investment deals worth 3.5 trillion yen and Japan is set to double FDI in India in the next five years including in areas like high-speed railways where China also has strong technology and is a competitor of Japan. Aside from economic competition, the fact that China and Japan are currently going through a period of very poor bilateral relations due to historical and territorial issues casts an additional negative light on India’s increasingly close relations with Japan,” he says.

Zhang looks at the positives, too. He is glad that Modi has so far treated the issue of border disputes with China cautiously. Not inviting the Dalai Lama to his inauguration was a smart move, he says. “However the border remains an unavoidable sticking point that can still damage relations. From Beijing’s perspective, it is hard to build additional trust with India without any progress on the border issue,” he elaborates. As two major BRIC countries, China and India share several interests, argues Zhang. “China doesn’t want to lose the potential of selling to India’s huge market, nor potential opportunities to cooperate with such an important nation in the Asia region. What’s more, as disputes in the South China Sea become more of a focus for China, maintaining steady relations with India and putting some of the more contentious issues on hold becomes a better idea,” says the Shanghai-based expert.

Yet, there are concerns. Zhang notes that India’s proposed deal with Japan to buy 15 Japanese amphibious US-2 aircraft as well as potential military cooperation with Vietnam, including joint exercises off Haiphong, show its ambitions in the Indian Ocean and possibly beyond. All of this will be seen with suspicion in China, he says. “Right now, a question that is very relevant to China and Chinese-Indian relations is whether Modi intends to follow in the path of former Prime Minister Manmohan Singh, who favoured a military build-up. These deals with Japan and Vietnam suggest that he might be—and that could be another possible stumbling block to relations with China,” he avers.

A clearer picture of India-China relations, however, will emerge only when Chinese President Xi Jinping visits India later this month.