The X-Tapes and the BJP 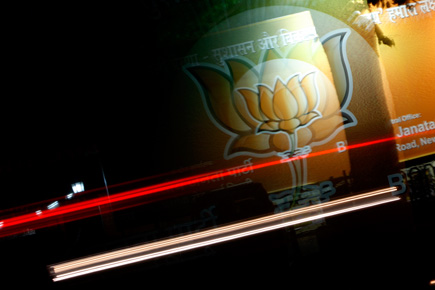 
The unbridled glee in the BJP camp over the 2G scam could soon turn to gloom. The Radia tapes also expose how their own party functions.

Going all guns blazing after the Government is a splendid way for an opposition party to overcome internal factionalism. And given how badly the Bharatiya Janata Party (BJP) was riven by infighting after the 2009 Lok Sabha election—the National Democratic Alliance (NDA), led by it, was roundly rejected by the electorate as a replacement for the Congress-led United Progressive Alliance (UPA) at the Centre—party members have been itching to pounce on anything that could serve as a unifying force. The 2G telecom scandal, in that context, should have been a Rama-send for the BJP. Instead, the Niira Radia tapes have only complicated life for those within the ‘party with a difference’.

In recorded telephone conversations available with Open, the BJP seems to be in greater disarray than anyone suspected, with outsiders appearing to know more and exercising a tighter grip on events than the party’s own leaders.

In the following conversation between NK Singh, Rajya Sabha member of the Janata Dal-United (a BJP ally), and corporate lobbyist Niira Radia, the two discuss the sharing of gas between the Ambani brothers—Mukesh and Anil. Singh expresses the worry that if Arun Shourie, former editor and minister in the Vajpayee Government, leads the party’s discussion on the 2009 Finance Bill in the Rajya Sabha, it would steer the debate in a direction unfavourable to one party. Singh tells Radia he has managed to get former BJP President M Venkaiah Naidu to speak in place of Shourie:

NKS: Now Niira, I am in another fire fighting…

NKS: So I have slightly shut my mind from this, because I am on the immediate issue of what is going to happen to Pranab Mukherjee’s announcement on the tax benefit to them on the gas. Given that he has withdrawn it.

NKS: So now I am working out a strategy how to get this back. One of the complications in this is that, between you and me, Mr Arun Shourie has gone and got himself completely on the other side…

NKS: …because he has been promised a Rajya Sabha [seat] by Tony and company. And yesterday, I just checked, Samajwadi has 50 per cent surplus votes in UP, and in combination with 50 per cent surplus votes of BJP, can give the BJP an extra ticket, and why should the BJP deny itself getting an additional Rajya Sabha [seat] on somebody else’s strength? So that, that’s the promise given, and therefore he was very, very critical of this whole gas thing, and said [so] in the BJP Parliamentary Board meeting day before yesterday.

NKS: Now whatever he said in the meeting day before yesterday is one aspect… but what attitude BJP will take on this whole issue of the debate on the Finance Bill, which is beginning from Monday in both Houses of Parliament, is of vital importance.

NKS: Because if large numbers of opposition MPs, and Samajwadi will definitely join, begin to say that Pranab Mukherjee has given a bad largesse to benefit only one company, then: a) Pranab Mukherjee is on the defensive and therefore the question of extending it retrospectively goes out of the window. So this whole… [incredible] managing that stuff in a way, and also I think, you know, that Arun is speaking. Shourie is speaking as a listed speaker in the Rajya Sabha for the BJP. Now, but fortunately what we have managed to do is make him, Arun, the second speaker, and made Venkaiah the first. So I don’t know what is Mukesh’s relations with Venkaiah.

RADIA: I said I thought he had good relations with Venkaiah.

RADIA: I thought so.

NKS: Then I am going to get him flown in today to talk to Venkaiah, because if he is the first speaker, and he already takes a party line, then it will be very difficult for Shourie in his second intervention to take a different line.

NKS: Then we have to orchestrate who will speak.

NKS : You know, this is the immediate problem right now. Because, frankly, if this doesn’t go through, this tax thing, then it’s a major initiative taken that fails to materialise. Because he has… Anil has also organised this.

After Arun Shourie confirmed in a TV interview to Karan Thapar on Sunday night that he was surprised at being replaced as the BJP’s lead speaker in the upper house on the discussion in July 2009, Open spoke with NK Singh. His conversation with Radia, he claims, “was social chit chat”, and denies that he had engineered the change of BJP speakers. “That the conversation took place is not a point of contention. It did. But in bravado, one does say such things,” he says, “As far as the tax break on oil and gas [exploration] is concerned, I had opposed it as revenue secretary in 1996. So my position is clear.”

On the allegation that Shourie was going to speak against the tax waiver in return for SP votes to get him a Rajya Sabha berth, Singh says he was “merely repeating the gossip in Delhi”.

Meanwhile, Venkaiah Naidu admits that he replaced Shourie as the party’s first speaker on the debate. “I cannot comment on a private conversation between NK Singh and Radia,” he says, but then goes on to clarify that he had not taken sides in the debate as the Radia tapes seem to suggest. “But, I can tell you that I spoke on the debate for one hour and 10 minutes. I only made a passing reference to oil and gas, and I have not pursued the line being suggested in the tapes,” he adds.

In Venkaiah’s and his party’s defence, the Deputy Leader of the BJP in the Rajya Sabha SS Ahluwalia says that Venkaiah spoke on infrastructure, textiles, commerce and industries, and not just gas. “No corporate group can force the BJP parliamentary party to speak anything in its favour in a parliamentary debate,” says Ahluwalia.

On a television interview with Karan Thapar, though, Shourie has been quite blunt; BJP leaders, he said, were influenced by lobbyists just as leaders from other parties were. “I would actually think that all parties are of the same nature in the sense that, you see, if you are becoming a national party, for instance, you would need resources, you will have to get it from these persons… if you are businessmen, you would have to be prudent enough to see different parties are in power in different states, so you must have relations with all parties… The tapes reveal access,” Shourie said on air.

In another recorded conversation between Radia and senior journalist Navika Kumar, the corporate lobbyist seems to know more about the storm brewing in the BJP than party members themselves. She called Kumar in the afternoon of 11 June 2009, and told her about a letter senior BJP leader and Darjeeling MP Jaswant Singh wrote to the party leadership. The letter, the details of which Radia seemed to know all about, came as a surprise to the party. Singh was expelled from the party in August last year—only to be taken back:

RADIA: Nahin, mein tujhe 5 baje ek news doongi, tu uss se pehle nahin de sakti (I will give you some news at 5 pm, you can’t telecast it before that).

RADIA: Basically there is a revolt which is starting in the BJP against the top leadership which includes Rajnath, includes Advani, includes Venkaiah, and that whole group of people close to Advani.

NK: And then it will be taken up and…

RADIA: They need some shake up.

NK: They need some thrashing of issues.

NK: And Jaswant Singh will put it together? (Laughs)

RADIA: Maybe he won’t, but the question is somebody is leading the revolt naa, to shake up the system… what is the outcome of that, how is he interested?

NK: That should be very interesting. Very interesting, at least BJP will hit the headlines even if for the wrong reasons, the way they used to…

RADIA: Lekin 5 baje ke baad hoga, hun (But it will happen after 5 pm)?

NK: Haan haan, mein nahi kar rahi (Yeah, I am not doing it).

RADIA: Usko pehle ghusne de andar, phir mein tujhe batati hun. Uska letter circulate… mere paas aa jaayegi, toh mein tujhe de dungi… tere ko toh mil hi jaayegi tere doston se wahan se (Let him enter the office, then I will let you know. Let the letter circulate… it will come to me, I’ll give it to you. You will get it from your friends there).

NK: Mein bilkul bhi nahin kar raha (I am not going to do that at all).

RADIA: Because I will never be given information again after that.

NK: No, no, no, I will not. See if it was big, I would have pleaded with you to let me do it. Even then, I would not have betrayed [you] and done it, but this one, I will wait for it to happen.

All this should be acutely embarrassing for the BJP. But like so many others, the party too seems to be in denial. “The BJP is a cadre-based party. There can never be a revolt in the party. There was no revolt,” asserts Ahluwalia, “Questions about how she knew about the letter should be addressed to her.” Of the thousands of questions that alert Indians now have on their mind, that might slip through.