In a drought-stricken village near Mumbai, men marry a second—sometimes even a third—woman whose only role is to fetch water for the family 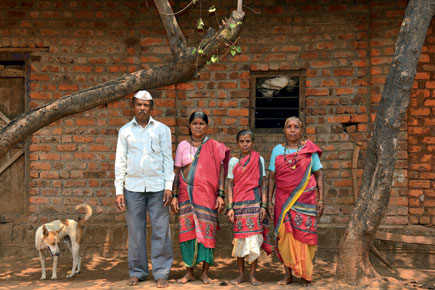 A photograph on a wall inside Sakharam Bhagat’s home shows three identically dress- ed women of varying ages seated in a row with him at the extreme end. All of them are his wives, and they live together in the village of Denganmal, 150 km from Mumbai. Bhagat has had all his six children— three sons and three daughters—with his first wife Tuki. His other wives, Sakhri (second) and Bhaagi (third), are childless, and this is not a coincidence.

Bhagat, 66 years old, is a farmer by day and a fisherman by evening. He is content in his situation because the wives have different duties that they fulfill with diligence. Standing beneath a mango tree, cleaning his teeth with a toothpick, his swarthy face breaks out into a smile as he talks about the arrangement. “My first wife Tuki got pregnant soon after marriage,” says Bhagat, “Therefore it was not possible for her to fetch too much water. She also had to do all the household chores along with helping out on the farm.”

And so he decided to marry again— with Tuki’s whole-hearted support. That was how Sakhri, a woman abandoned by her husband, came into their lives. “There was no one to fetch water. I did farming. What we produce in the four months of scattered rain is what we eat through the year. I told Sakhri that her only job was to fetch water. Tuki promised to take care of Sakhri’s needs in return for the water she fetched,” says Bhagat.

Sakhri would fetch up to 100 litres per day, but as she aged and found it difficult to walk such distances, Bhagat married for the third time. Bhaagi, a widow at 26, came into the family about a decade ago, and she was assigned the duty of getting water for the family. Sakhri, whose job it earlier was, is now in charge of the farmland and works as a farm hand. “If Sakhri and Bhaagi too have children, then who will look after their share of the work?” asks Bhagat. “Tuki’s children are their children, too.”

The marital arrangement did not face any resistance from the village panchayat because it involved the rehabilitation of Sakhri and Bhaagi, who would otherwise have had no home. But there was another reason why the village found nothing unusual about it: Bhagat was not the only man with more than one wife. Others in this village also have multiple wives, the second one usually there only to fetch water. They are called paaniwaali bais (‘water wives’) in the region.

Denganmal is a nondescript clutch of mudhouses with verandahs and thatched roofs that is home to about 100 Adivasi families. As you make your way towards it from Mumbai, the paved road disappears at Shahpur, a taluka in Thane district. From then on, it is 55 kilo- metres of a dusty bumpy ride into the interiors. There are 8,000 odd drought-hit villages in Maharashtra, and Denganmal is only a small statistic—the village has been home to drought for as long as its inhabitants can remember. But Denganmal is unusual because the Basta river that supplies water to Mumbai is barely 8 km away. Three kilometres from the village is also a dam on the river whose reservoir has abundant water. But while pipes take this water all the way to Mumbai, there is no pipeline to the village.

At some point, years ago, the villagers hit upon a solution to their water woes— marry a second wife who will be tasked with making repeated treks to the dam to collect water. That is all that a paaniwali bai does through the day, whatever the weather. In return, it’s the duty and responsibility of the husband and his family to look after her and accord her the dignity of a wife. But she is not entitled to a share in the property and assets of the family, nor can she share the man’s bed so long as the first wife is alive. Because the second wife is often someone who has been abandoned by her previous husband, or a widow, she is expected to be content with a roof over her head and the social standing that comes with matrimony.

On any given day, Denganmal’s paaniwali bais fetch at least 100 litres of water each, making numerous 3-km treks. In the power structure of the family, she takes her orders from the first wife, whose role typically includes the milking of cows, cooking of meals and raising of children. There is minimal reason for domestic disputes, say residents of the village, since their household roles do not overlap. While the first wife must be an unmarried young girl of the same caste, however, there are no eligibility restrictions for the second wife.

According to Dasharath Bhalke, an activist of the Shramajeevi Sanghatna, an NGO working in Thane district for the upliftment of the marginalised in villages such as Denganmal: “No one has their daughter marry a man in a drought-hit village. Therefore, it is difficult for the men in Denganmal to get wives from other regions, particularly the irrigated parts of the state. So a man from a drought-hit village will marry a girl from another drought-hit village, or from his own. Such women understand drought and the needs of families in such villages, so there is no shirking of work. Every woman in the family does her equal share of it.”

Being a paaniwali bai is arduous. On the day that Open visits Denganmal, the temperature is an oppressive 42° Celsius, and we see a steady stream of women walking to the dam with aluminum pots perched on their heads. “We don’t sleep at night,” says Rukhi, one of them, “We go in groups to fetch water.” In the queue for bathing, men come first, children next and then women.

“Due to all the water the women fetch, they are now going bald,” says Ambu Hema Awali, a resident of the village, “They are stunted and unable to produce children.”

Another villager, Palu Awali, says that the birth of a daughter is heralded with much happiness here because it means another farmhand or helper is born. As a teenager, Awali says he helped build the Basta dam, a project in which every member of the village participated. But they didn’t get any of its water. In 2003, the state government provided huge containers that could hold 5,000 litres of water. But they still had no water connection to the dam.

Drought has changed the traditional modes of life in these parts. According to Prakash Kodaka, the taluka head of the Shramajeevi Sanghatna, Denganmal’s men have now started going to work at building construction sites as daily-wage labourers. “They earn for a week, come back home and spend the money on domestic needs. They then go back to earn again,” says Kodaka. June to November are farming months, when rains in the area—sparse as they are—help the villagers cultivate nachni, urad and bhagar. Vegetables are usually eaten only once a week or once a fortnight when families go shopping to the weekly bazaar at Kasara, 25 km away.

A walk through Denganmal reveals unwashed children, many of them waiting for their mothers to feed them in between their water trips. Malnutrition is high and so is infant mortality. Villagers narrate the tale of a young woman who was forced to go fetch water just 10 days after her child was born.

A majority of the women here have low haemoglobin levels. Many of them suffer from anaemia, miscarriages, shifted fertility and menstrual cycles, apart from routine back and neck pains. Water scarcity also dictates the household routines for washing clothes in the village; daily wear is washed twice a week, while bedsheets and coverlets go unwashed for months on end.

A water tanker with a capacity of 1,000 litres arrives in the village once every five days, and the queue often gets ugly. “Every time the tanker comes, there are fights that get really scary. Women pull each other’s hair, abuse and beat each other up. If they miss getting water from the tanker, they have to walk the mandatory 3 km. All the pent-up frustration finds a vent in the fight,” says Bhagat.

Women in the village hope that at least their daughters would have better lives if the government lays pipelines from the dam to their village. “We cannot do it anymore,” says Tuki, speaking on behalf of Denganmal’s women, “We are tired of fetching water.”