The Unsafe Augusts of Assam 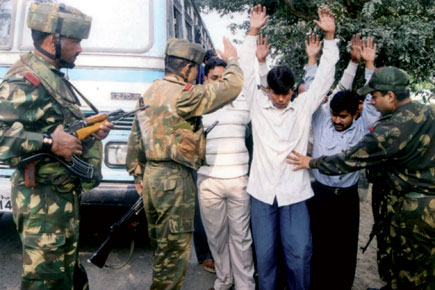 
For many years, I thought it had been a night in August when my maju-borma—my father’s elder brother’s wife—screamed out for help to the neighbours while we were visiting her house. My brother and I had played a prank, which had terrified her. The neighbours rushed out of their houses to help. Men from the nearest outpost of the Village Defence Party came with their bamboo artillery, too. When they learnt what had happened, they looked at me with accusing eyes as if I had done something unpardonably wrong.

My father tried to calm them down. I was terrified. My brother wasn’t, because he was too young to understand what was going on; perhaps he was still laughing that we managed to scare maju-borma. She opened the door, walked out of her house, spitting on her chest to chase away the fear that my brother and I had planted in her. “Thu-thu-thu! You boys would have killed me today,” she said, “Bhoy khalong dei!” We didn’t laugh like we used to do when she spoke in our dialect, not because father was around, but because both of us knew we had done something wrong, though we didn’t know what it was. Playing a prank on your aunt didn’t seem like much of a sin.

Years later, when I was discussing that event with my father, he corrected me: “It wasn’t August; it was November.” He laid stress on the word ‘November’ to suggest that he was sure. I wasn’t convinced, “No Pita, it was really August. Why would she be so scared then? I mean, I can understand people being scared and vigilant during August. The VDP party, the shut doors…”

I was in college when we had this conversation. My mind raced as I spoke to him, remembering, recollecting. Was it really November? Then it must have been a pretty warm November because I don’t remember wearing warm clothes. I don’t remember people sitting around fires lit in old blackened iron cauldrons in front of their houses and chatting— a common scene during winters. I don’t remember the smoke and smell of potatoes burning.

Those fires were often alive with a lot of loud laughter. When the thick, eye-smarting smoke going upwards would bend towards one of the people sitting by the fire, we would tease him or her because it was believed that the smoke chased only those people who stood by the road and peed. When the smoke ‘chased’ our serious uncles and scary aunts, we tried hard to suppress our laughter because we didn’t dare ask them if they peed by the side of a road when no one was watching.

There were no sounds of such laughter and chatter that night. No, I don’t remember people doing the things we commonly do in winters. So what was unusual about that November? Was it really November?

My father looked at me and said, “No, it was November. Don’t you know what was going on that year?” Then, as a first year undergrad student in college, I didn’t know. But now I do, and I understand why the atmosphere of August had extended to wrap around November, why November had become synonymous with August, why no smoke chased the person who peed by the side of the road.

It was natural for me to believe all these years that it was August because I—like everyone else in this state, like government office-goers and insurgents, like middle-class people in Guwahati and daily wage earners—have bitter memories of August.

It is during August that we are reminded of our turbulent relationship with Delhi, because there is an increase in the density of Indian Army personnel, who stand by the streets of Guwahati, stopping ‘suspicious looking’ people in cars and on motorbikes to ask random questions such as ‘Where are you going?’ and ‘Where are you coming from?’ and ‘Who is with you?’ It is during August that we are afraid to travel much, especially by train, for fear of bombs planted on the tracks—but we have always had to travel, because it is during this period, between late July and early August, that students from Assam return to different cities across India to their educational institutions after spending their summer breaks at home. Not everyone can afford an air-ticket.

It is during August that bombs explode in different parts of Assam.

People say this or that militant outfit is trying to send this or that message, to show their strength, waning or otherwise. In 2000, on one such day in August, one of my classmates from Maligaon in Guwahati went out for his mathematics tuition lession and never came back. He must have been engulfed by one of the many reasons that make August a volatile and unsafe month in Assam.

Augusts on the banks of the Brahmaputra have been unconventional for more than three decades now, unlike Augusts on the banks of the Kosi or Narmada or Yamuna. Perhaps the best phrase to describe an Assamese August is: ‘the reign of fear’. Especially during the 90s, when I was going to school in Guwahati by crossing the Brahmaputra River every day.

I remember going to celebrate Independence Day with my father at his office, with the hope of eating free khurmas, boondiya-bhujiya and jelepis. Sometimes, we would walk out of our protected All India Radio Campus and visit one of our family friends’ houses. Even in January, together, we would watch the Republic Day parade and wait to see Assam’s convoy (1). When it would appear on the TV screen, we would try to recognise the things in it.

During such trips, we would often walk or drive past the Judge’s Field, where the state government celebrated 15 August. “Look at that,” someone always said, “We are celebrating Independence Day out there, with such tight security that not even an ant can get in without permission.” At that age, I missed the tragic connotations of celebrating Independence Day under a blanket of fear.

This fear—normalised by the time we started having crushes and bunking school to watch first-day-first-shows with friends—is something worse than actual death. The person who dies of a gunshot during a skirmish doesn’t feel this fear for long. But it disrupts daily life with far reaching consequences. It makes people do things that are out of character, that are unexpected.

I saw my mother doing something like that once.

In the late 90s, we bought a new car. I forget the model now, but I remember the driver we hired because we would often fish with him when we went to our grandmother’s house. When we decided to bathe in the large pond in our ancestral house, he bathed with us and looked over me and my cousins. Often, he would tell us stories about the conflict in his village—now in Bodoland—which he left behind to earn a living in Guwahati. When we had nothing to do, we would bug him to teach us how to say ‘I love you’ in Bodo.

We went to our ancestral house almost every fortnight, and during one such trip, when the secret killings of Assam—a series of extra-judicial killings of perceived insurgent sympathisers allegedly conducted by the government—were going on, we were stopped by a group of Army personnel after we had crossed Jorabaat, an intersection.

When security forces stop us on trips like this, my father always walks out of the car, shows his identity card, and, since he is a Central Government employee, we are rarely checked. Sometimes they tell him that they like the Sainik Bhaiyon ka Karyakram broadcast by the All India Radio. But that day, my father had forgotten to bring his identity card and they wouldn’t let us proceed without checking the car. We were asked to step down from the car and open the trunk.

It was then I saw my mother stepping out, and I was surprised to see that when she spoke to the security forces, when she introduced herself as a professor, she covered her head with a sador. She rarely did that, unless we were in the village. “It is just a custom,” she explained, “I am a daughter-in-law here, not a professor.”

I never asked her why she did that while speaking to the Army and I wondered for years. Perhaps that day she was stepping into the role of a ‘Mother Who is a Professor’ to earn respect and sympathy, putting aside her feminism for a little while because, after all, she was living at a time when every person who spoke Assamese was suspect in the eyes of the paranoid Indian State.

The officers peeped inside the car. They checked our driver’s driving licence and looked at my brother and me. I must have looked very young then, otherwise they would have probably searched me, too.

The night my aunt was almost scared to death by an innocent prank we played was actually a November night, one that had become synonymous with the nights and days of Assamese Augusts. But I didn’t believe my father because he has a good memory; I believed him because he told me it was during Operation Rhino—a ‘counter-insurgency’ operation launched by the Indian Army in September 1991 when news of death and torture were everyday conversation.

A few yards before we reached maju-borma’s house, my brother and I raced to see who could reach her house faster. The choric sound of our leather shoes on the gravel road approaching her house was loud at night. I don’t know whose decision it was to play ‘military-military’, but we stamped our feet, jumped on the verandah, banged on her wooden door, until she started screaming for help, refusing to open the door. We stopped only when our father reached. “What the hell are you guys up to?”

“Is that you?” she asked, opening the door with tears in her eyes—I could clearly see them in the light of the kerosene lamp. Later, she broke open a coconut for us, grated it, squeezed it and strained the coconut-milk into a steel glass. She mixed it with water and made milk-tea for us, with a little sugar tossed into the boiling pan before serving.

She told us about how most people in the village didn’t understand the language of the Army and were beaten up because they didn’t know what to answer. She looked at me and said that in another village, a person called Pitou was badly beaten up because when the Army asked him his name and he said ‘Pitou’, they thought he was making fun of them by asking them to beat him up—since ‘pito’ in Hindi means ‘beat’. My father laughed, “It must be a joke! Which village? When?” She hushed him up and said with firm conviction, “No, don’t laugh. It is true.”

Outside, the crickets were singing. Of course it was a scary night.

(A correction was made to the article after it was published)