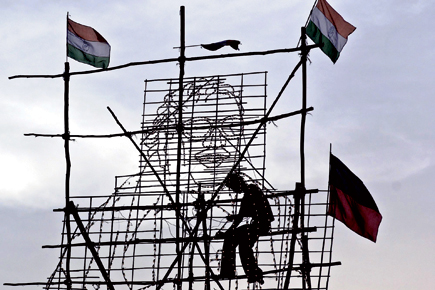 The parking lot of Sathyamoorthi Bhavan, the Congress office in Chennai, is almost empty. There is only PCC President BS Gnanadesikan’s white Innova with a tricolour at its mast, and a couple of other cars. There are less than ten people in the office. There is little sign that a general election is round the corner.

The Congress has not yet been able to strike any major deal on the poll front in Tamil Nadu, though it has not yet given up on discussions with the DMK and DMDK, the party led by actor Vijayakant. According to Election Commission figures of the 2009 Lok Sabha polls, the DMDK has about one-tenth of the state’s vote.

“I personally feel that in Tamil Nadu, Congress should contest the polls alone. We may lose one election, but we would perform better in the future if we do so,” says Gnanadesikan, who took charge of the PCC in 2011. Over the past four decades, the Congress has never been able to look beyond the temporary goal of winning a few seats and sharing power in the state. Pre-poll deals have always been cut on the basis of convenience, never on principle.

The Supreme Court verdict to commute the death sentence of the three accused in the Rajiv Gandhi assassination case has come at the worst possible time for the Congress. Further, Chief Minister Jayalalithaa’s decision to free all the seven accused in the case, a move which has been stayed by the Supreme Court, has made Tamil sub- nationalism the focus of the poll campaign in the state.

This time, with both the DMK and AIADMK refusing to tie up with the Congress, the grand old party would find it tough even to see Union Finance Minister Palanivel Chidambaram through from Sivanganga. With the DMK as the senior partner in the alliance in Tamil Nadu, the Congress had won eight of the 27 seats bagged by the UPA in 2009. After parting ways with the DMK over the 2G scam and the heartburn over the Tamil-Sinhala civil war in Sri Lanka, the Congress has been in isolation in the state.

There is little that is surprising about the downfall of the Congress in Tamil Nadu, a state where the party held power till 1967. The entire political platform in the state as it stands today has been built on the work of a man who was an ardent critic of the Congress, a champion of the self-respect movement and a fighter against casteism and Brahmin hegemony: EV Ramaswamy. Affectionately called Periyar, he was the founder of the Dravida Kazhagam, the mother organisation of the DMK and AIADMK. “We stand only for the dignity, peace and justice for our brothers and sisters in Sri Lanka. For that, we demand nothing short of the liberation of Eelam—a proposed independent state that Sri Lankan Tamils and the Tamil diaspora aspire to create in the north-east of the island nation—but we have been portrayed as separatists and terrorists by our own government,” says Pazha Nedumaran, a former Congressman, who is one of the most prominent voices of Tamil nationalism, and a close associate of former Tamil Nadu Chief Minister K Kamaraj.

P Maniyarasan, general secretary of the Thamizh Thesa Poduvudamai Katchi, a party that stands for a liberated country for Sri Lankan Tamils, is certain that the ongoing human rights violations against the Tamil people in Sri Lanka, and the release of the seven convicts in the Rajiv Gandhi assassination case will be the hottest issues in this general election. “The Government of India is not pushing for any international intervention in Sri Lanka. That is precisely why we stand against the Congress.”

Small parties are the most ardent votaries of Tamil sub- nationalism. The Viduthalai Chiruthaigal Katchi (VCK), an ally of the DMK, which has a sizeable vote share among Dalits in the northern districts of Tamil Nadu, has found itself a mix of Dalit emancipation and Tamil nationalism. Its leader Thirumal Valavan was elected to the Lok Sabha from Chidambaram’s constituency last time, defeating the Pattali Makkal Katchi candidate. The PMK has a vote base among the Vanniyar community. The Puthiya Thamizhakom headed by K Krishnaswamy, the sitting MP of Thenkasi, also has a stake in wooing the state’s Dalits, who comprise about 20 per cent of the total voting population in Tamil Nadu.

Small political parties like the Nam Thamizhar led by film director and actor Seeman, and fringe groups like that of the 17 May movement, act more as pressure groups on mainstream political parties. All these small parties and groups are grounded on the idea of Dravidian pride.

None of these pro-Tamil parties, big or small, take the BJP seriously as this ‘national’ party has not yet been able to prove itself as a major player in the state. Moreover, Hindutva does not sit well with Dravidian identity politics. The AIADMK burnt its fingers with the alliance it struck with the NDA; it has since realised that this would not pay off either in the state or at the national level. Jayalalithaa, who has prime ministerial aspirations, has chosen her current partners keeping their secular credentials in mind. Nevertheless, she has not spoken a single word against the BJP prime ministerial candidate Narendra Modi so far.

The post Lankan civil war scenario is difficult terrain for mainstream political parties. The Tamil tragedy in the civil war of 2009 is still part of public memory here. Public meetings, online discussions and film screenings on the civil war are organised regularly. A recent screening of the Channel 4 documentary titled No Fire Zone: In the Killing Fields of Sri Lanka was reflective of the mindset of young Tamils.On the evening of 22 February, the large banquet hall of a Chennai hotel was packed with students who had a Skype interaction with Callum Macrae, the film’s director, after the screening. “The Congress and BJP are going to be washed out in this election,” says Veera Prabhakaran, state coordinator of the Tamil Youth and Students Federation, a student’s organisation working for the liberation of Eelam.

The DMK has, in fact, been put in a spot of bother by the AIADMK call to free the seven convicts in the Rajiv Gandhi case. “Talking about the release of the prisoners would be sub judice at this point of time,” says T Siva, an MP and the propaganda secretary of DMK, responding carefully to the question of how the DMK is going to counter the advantage that Jayalalithaa has seized. “A secular government should come to power. We are focussing on corruption and the threat to secularism. People are smart enough to read the true colours of the AIADMK. It was only a month back that Jayalalithaa refused parole to Nalini, one of the seven convicts in the case. How did she change all of a sudden?”

It is reasonable to assume that the sympathy wave in favour of the convicts in the Rajiv Gandhi case is to some extent the result of thousands of civilians being killed in the final days of the civil war. The footage released by the UK’s Channel 4 last year fanned Tamil fury and anguish over the tragedy. It is true that Indian Tamils had rejected the violence and extremism of the LTTE after Rajiv Gandhi’s assassination in 1991. The then ruling DMK won just two seats in the Tamil Nadu Assembly election, despite Karunanidhi’s public apology for the former prime minister’s assassination. The Congress, and its ally AIADMK, won all the 39 Lok Sabha seats in the state.

However, this rejection of the LTTE’s guerilla warfare did not last long. “The convicts of the Rajiv Gandhi assassination case have lived almost a lifetime [on death row]. The campaign against their death sentence has also strengthened the anti-death penalty movement in general. Moreover, discrepancies in the investigation and trial process are still emerging. All these facts, along with the deadly images of war crimes on Tamils in Sri Lanka, helped generate empathy for them,” says writer and activist SP Rajadurai.

Sri Lanka’s military solution to the 25-year-long civil war has given rise to more and more organisations determined to continue the LTTE’s mission. The ethnic conflict that resulted in major violence in 1983 accelerated the mass exodus of Sri Lankan Tamils to Tamil Nadu. “Repeated requests to the Centre for an immediate intervention fell on deaf ears. In 1985, the then Chief Minister MG Ramachandran took an all-party delegation to the then Prime Minister Rajiv Gandhi requesting him to demand an immediate ceasefire in the region, but no action was initiated by the Centre,” says P Nedumaran. The decision to send troops to Sri Lanka only deepened the scar, leading to the violent retaliation that claimed Rajiv Gandhi’s life.

No political party in Tamil Nadu can survive without displaying some solidarity with Tamils in Sri Lanka. Even the Congress tries to tap this sentiment. “India supported the US resolution against Sri Lanka at the UNHCR because of pressure from us. Initially, the Centre was in no mood to support the resolution,” says Gnanavedikan.

In this vein, Tamil fishermen being fired at or tortured by the Sri Lankan navy is a major issue for Tamil sub-nationalist movements. According to fishermen organisations, there are hundreds of fishermen languishing in Sri Lankan jails. In a letter to India’s Prime Minister last month, Jayalalithaa blamed the Centre for its ‘meek and weak’ response to repeated instances of attacks on fishermen in their traditional waters. “In maritime disputes, India protects the rights of Gujaratis and Bengalis, but not Tamils,” alleges Pazha Nedumaran. According to him, more than 700 Tamil fishermen have lost their lives over the last two decades.

Not everyone, though, is thrilled with the resurgence of Tamil sub-nationalism. “The Tamil nationalism you see now has no content. It is only a tool being used by political parties and interest groups,” says SP Rajadurai, who is highly critical of the fringe groups and parties playing up Tamil sentiment. “It is very easy to talk about Sri Lanka, a foreign country,” says Rajadurai, “None of these movements have the ideological content that Periyar had when he launched the Dravidian movement. Tamil Nadu is one of the most corrupt states in the country. These people are not worried about it. They raise the issue of water scarcity only when it comes to cases of water disputes either with Karnataka or with Kerala. They do not say a word against the dreadful sand mining that kills the rivers in Tamil Nadu. The kind of Tamil nationalism being preached now is in the category of the fanaticism expressed by groups like the Shiv Sena in Maharashtra.” Rajadurai clarifies that he is against the attack on Tamils in Sri Lanka, and does not want the convicts in the Rajiv Gandhi case hanged. Nevertheless, he is worried about Tamil sub-nationalism deflecting public attention from corruption. His biggest fear is the possibility of a non-performing government with no long-term policies, running on freebies, coming back to power by playing on Dravidian pride.