The Story of Their Experiments with Gandhi 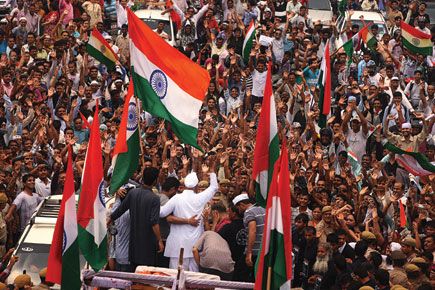 
It was a picture that struck a chord immediately. An old man, his back to the camera, surrounded by hundreds of followers. It almost felt as if one were looking at a picture of Mahatma Gandhi at Delhi’s Birla House, days before he was assassinated by a lunatic. But it was not an archival picture dusted off for a government advertisement. It was a picture shot a few days after India’s 65th Independence Day—of a former driver of the Indian Army who had taken it upon himself to change the country’s destiny. The picture was not incidental, though. It was shot with a clear objective. It was ‘manufactured’, so done upon the advice of a media strategist, one of the many who have been designing the whole Anna Hazare movement for the hungry tide of cameras.

They have been denying it, but it is a fact that despite the simmering anger that is making many people join the crowds on their own, there is a carefully crafted plan to make it seem like what parts of the media have hailed as India’s ‘second freedom movement’. It is a movement whose image is being thought out, shaped, and projected by a battery of erstwhile media professionals. After all, many people might be crowding onto streets across India, but the majority remain at home, reading newspapers and watching TV. And these are the people whose opinion has to be co-opted, apart from sustaining the crowd at Delhi’s Ramlila maidan.

Leading the pack is 35-year-old Abhinandan Sekhri, a former TV professional, who once managed a popular programme of political satire. Sekhri has been associated with Arvind Kejriwal for long, and has helped him in media campaigns of the pre-Anna days as well. “I know it’s hard to believe that we hardly manage things, but that is a fact; things are getting managed on their own. But even my own friends won’t believe me,” he says.

It is difficult to believe. As a team leader, Sekhri has been managing a group of young volunteers, ranging from journalism students to those studying business. Some of them manage press releases, while others run updates and other information projects on social networking sites like Facebook and Twitter. Since Arvind Kejriwal and his core team cannot always appear on all primetime TV debates, a team B—Sekhri and a few others—goes from studio to studio, presenting its point of view.

But beyond TV bytes and debates, there is a larger media strategy to project Anna Hazare as Mahat- ma Gandhi. From bhajans sung to Gandhi caps, everything is well planned in strict accordance with this strategy. Hazare’s movement may have more similarities in terms of overall imagery with the JP movement of the 70s, but his strategists are keen to project him as something much larger. Something akin to the Father of the Nation himself.

It was during the first phase of the Anna agitation, in April, that Team Anna, as they like to call themselves, learnt some of its most valuable lessons in giving Anna the aura of a mahatma (great soul). On the first day of Anna’s April fast at Jantar Mantar, they had a huge picture of Bharat Mata right behind him. Later that day, a Muslim leader, who had turned up there in solidarity, objected mildly to the picture—saying that it was identified with the RSS. Team Anna replaced it with a picture of Mahatma Gandhi.

But more PR disasters were to follow. Right-wing leaders like Sadhvi Rithambara and RSS spokesperson Ram Madhav appeared one day, with Madhav even sharing the dais with Anna Hazare. This put many people off, as did Hazare’s statement in praise of Gujarat Chief Minister Narendra Modi’s administration. Sekhri admits these as errors, but says that there was no way of controlling who came to share space with Anna and who not. “If Kapil Sibal comes tomorrow and wants to sit at the site of the fast, can we stop him?” he asks. However, at the Ramlila maidan, Team Anna has acted with care.

The other prominent cog in Anna’s media wheel is the former Star News anchor Shazia Ilmi. As someone who has been with TV for long, Ilmi knows an anchor’s mind and what works best for a participant in a studio debate. If you can broadly anticipate what questions a journalist will raise, that’s half the battle won. In their war against the elected Government, TV studio battles aren’t what Anna Hazare and his associates are ready to lose. A little over a year ago, Ilmi turned from news TV to film-making, and then, activism. A mass communication graduate of Jamia Millia Islamia and Cardiff University, UK, Ilmi is now a part of the core team of India Against Corruption.

Ilmi, however, would rather not be described as a media manager. “Media management is an embarrassing phrase to use,” she stresses, “Such corporate words lose meaning once you are part of such a movement.” Yes, she does advise the team on how best to get heard in and through the media. She goes to TV studios and fields questions directed at the team, but she insists she is “a pro bono volunteer of the people’s movement” and no more. “Something big is happening here,” she says, insisting that it is “the people” who want Anna Hazare and his team to intervene on their behalf. “The numbers (joining the movement) made the Government and media change their minds,” she contends.

To keep it alive in the media, and, more importantly, in the aam aadmi’s mind, Anna’s image as a simple-living and high-thinking Gandhian is carefully spun and re-spun. “He binds you with his moral simplicity,” says Ilmi. She reminds you that Anna is neither “very politically astute nor media savvy”. In her observation, “He doesn’t know or remember important political events in history. With him, it is like going to the basics: if he decides he is going to sit on a fast and makes up his mind, he will.”

Anna Hazare may well make up his own mind on such matters as fasting, but that is not enough to turn this into a freedom movement. That is Team Anna’s task. It was Sekhri’s idea, for example, to put Anna on YouTube soon after he was arrested. “We didn’t want people to think that it was all over with Anna’s arrest,” he says, “That’s how we got this idea of putting up his messages on the internet.”

The Team’s media strategists have also tried to cash in on popular TV programmes like musical reality shows. On one such show, Anna was asked to be a judge. Accompanied by Arvind Kejriwal, who spoke for long on how the Jan Lokpal bill was going to change India’s future, he happily complied.

Then, in another major leap, Irom Sharmila Devi, who has been fasting in Manipur for more than 10 years in protest against the draconian Armed Forces Special Powers Act (AFSPA) in force there, was approached to seek her support for the Anna movement. It’s a different matter that this came in for criticism in Manipur. It was also ironical, since the majority of those dancing in jingoistic fervour for Anna’s cause are more than a little likely to support ‘tough’ measures like the AFSPA.

Months ago, when Anna Hazare and his team first demanded the adoption of their Jan Lokpal bill, India’s TV channels were cautious in their appraisal of it. Questions were asked of the team, attempts at due diligence were made, and their methods were subject to scrutiny. Why did Team Anna want to circumvent India’s Constitutional legislative process? Was it not trying to ram its bill through? For every question raised, the Team had a ready response, formulated to play precisely to the galleries being addressed. The soundbytes were clever.

When a TV anchor asked Ilmi, in one of her many studio appearances since 16 August, about the Team’s attempted subversion of parliamentary democracy, she retorted that the Government was “subverting democracy itself by ignoring what the people want”.

Without a potent Lokpal, Anna and his team argue, corruption will continue to flourish. “When there is a change in the status quo, it shakes things up,” says Ilmi, “And people who are beneficiaries of corruption don’t want a change in the status quo. That includes some big media players as well.” Media vehicles, she adds, are now coming out in support of the bill and its crusaders “because they are getting something out of it”. She contends that TV channels realise that by not covering the movement, they stand to lose eyeballs to others who are.

The Team is evidently well versed in the game of eyeballs. It has been timing its press conferences and news breaks to near perfection in accordance with patterns of TV viewership in India. One rule, for instance: never release an important nugget of information during the hours that channels air recorded shows.

The same sense of clockwork coordination keeps team members ready with answers even before questions are asked. “It is spontaneous,” Ilmi insists, “No one tells me what to say.” Ask her about the team’s insistence that the bill must go through in the exact form it has been drafted, she replies that Team Anna is open to negotiation. This, she says, is also so of provisions of the proposed law drafted by the Team that can best be described as contentious. Its Jan Lokpal bill, for example, covers only government-funded Non-government Organisations (NGOs), while the Centre wants all NGOs under its purview. “There are elements in the Jan Lokpal Bill that need to be thrashed out and the team is open to discussion,” says Ilmi.

That’s in keeping with the buzzy interactive spirit of the internet. Indeed, the Jan Lokpal campaign is the most youth savvy political campaign of recent times, easily outclassing the Youth Congress’ much touted membership drive. Picture this: apart from Kejriwal and Kiran Bedi tweeting the movement live and appearing freely on TV channels, the campaign has an interactive phone line. The campaigners have hit upon a novel way of garnering support: all those who support the movement can simply ring a Mumbai number to register their thumbs-up. Every missed call is a ‘vote’, and the campaign claims to have garnered over 13 million so far. This campaign is running parallel to the one on social media. The website, apart from YouTube videos, breaks down the bill into a snappy PowerPoint presentation as well.

But it is clear to Team Anna that no PowerPoint presentation would work in the absence of effective symbolism. That is why Mahatma Gandhi is so important to the campaign. From an announcement made on 23 August, it would seem that even picking 16 August as the launch date of Anna’s second fast was a strategic idea. This was the date in 1933 that Gandhi started his fast from prison, after he was not allowed to work for ‘untouchables’ (as called then). At the Ramlila maidan, vehement parallels were drawn. This caught the Government offguard; it had apparently not thought of it. Or it just didn’t realise what its decision to arrest the frail old man would mean as historical rhetoric in the hands of Team Anna. On the eighth day of his fast, Mahatma Gandhi was released unconditionally. It was also on the eighth day of Anna’s fast that Prime Minister Manmohan Singh finally sent Anna a message aimed at ending the deadlock.

But beyond all these echoes from the past, lie small facts that just cannot be ignored. Team Anna’s vision is utopian at best, its claim to greatness an assumption yet to be tested by the rigours of reality. Like Mahatma Gandhi said of Western civilisation: “I think it would be a good idea.”