The Storm That Stirred a Caste Cauldron

Cyclone Thane did not just devastate Puducherry and large parts of Tamil Nadu, it also ripped open hostilities between castes 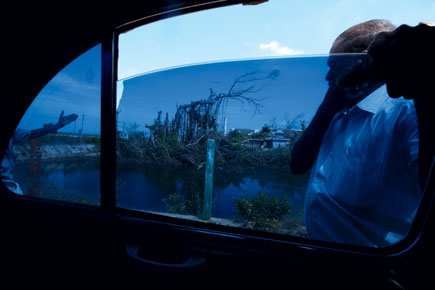 And then Cyclone Thane struck.

Thane started late last year as a tropical disturbance west of Indonesia. By 26 December, it was declared a full-blown cyclonic storm headed for southeast India. There was sufficient time to warn the coastal areas of Tamil Nadu and Puducherry, where it was going to unleash its 150 kmph winds. Even so, by the time it was done, 49 lives had been lost.

Cyclone Thane hit the Tamil coast on 30 December. It destroyed a million odd coconut trees in Cuddalore district alone. It wreaked havoc across cashew plantations, 28,000 hectares of it, and flattened fields of sugarcane, paddy and other crops, uprooting some four-fifths of all agricultural plants in its sweep. The cyclone damaged about 750,000 houses too, and knocked over or bent some 45,000 electrical poles—enough to create a power crisis in the region. Absence of power meant a water crisis, since water pumps could not be used.

Puducherry fared no better. Signs of the wreckage are visible everywhere, and the road to Auroville is lined with uprooted trees. Cyclone Thane ravaged 75 per cent of this tiny Union Territory’s green cover, ruined 17,012 hectares of paddy, damaged 80,000 huts, and knocked 124 power transformers out of service.

It took only a few days for the Tamil Nadu Electricity Board to restore power and water supply to urban areas, but rural Puducherry and Tamil Nadu had a long wait in store. This was especially true of Dalit villages and neighbourhoods, which typically stand isolated from the rest. That all this would spell trouble in Sathamangalam, located 15 km from Puducherry town, was perhaps inevitable.

The village is strewn with uprooted coconut trees. In Sathamangalam Pet, the Dalit colony of 70 families, one sees broken houses, burnt shells of vehicles and frightened faces of children. This is not the result of the cyclone, but what happened in its aftermath. With their water supply cut off, the village’s Dalits went to the panchayat president for permission to draw water manually from the public tank. Located in Lower Sathamangalam, this tank lay adjacent to the Dalit colony, but access was restricted by a compound wall and gate built recently.

The panchayat president, a Vanniyar, informed them that the tank operator—also a Vanniyar—who had the keys was unavailable to open the gate. In distress, a few Dalit men jumped over the compound wall, climbed onto the tank, and helped themselves to water. “When we did this, the panchayat president arrived and opened the gate,” says Babu, a Dalit resident of the village, “Where did he get the key from? When we asked, he told us he had a spare key but was not sure whether it would work.” The president also told them that what they had done was “improper”. The implications of this, they would learn in a few days.

On New Year’s Eve, as the village’s Dalits recount, a group of about a hundred Vanniyar men armed with crude weapons attacked the Dalit colony. They were ruthless. “They did not even spare the children. A 5-year-old boy was thrown into the paddy field. Women were also beaten up. They burnt a bike parked on the road,” says S Lalita, a resident of Sathamangalam Pet. “They thrashed me with a piece of wood. I fell down, caught someone’s leg and begged for mercy. He just kicked me, caught hold of my hair, and dragged me along the road.” Another woman, R Murukumathi, was assaulted with a metallic rod. The attitude of the police, she alleges, was no better; the male cops who turned up to investigate the incident took a leery interest in her wounds, demanding to see her thigh injuries.

T Felix, a sub-inspector of the local police station who was present on the spot when the first attack took place, had stood impassively by. The colony’s Dalits were left to fend for themselves, and they did eventually manage to block entry to their colony that day. But it only resulted in another round of violence the next morning. On New Year’s day, a still larger mob broke in. “[This attack] was more brutal. They destroyed each and every house, damaged all our vehicles, even kitchen utensils. The few household goods spared by the cyclone were smashed,” recounts Ezhumalai, a resident of the colony whom the police later charged with trespassing into the water tank compound and attacking Varadarajan, the tank operator. The few Dalits who took refuge in the village’s community centre were also attacked. All the window panes of the building were broken.

The police, again, chose to look the other way. Of the first day’s violence, sub-inspector Felix now says the cops were too few to stop the violence, adding for extra measure that Dalits brought it upon themselves. “This is a long standing issue. [Dalits] used to jump the compound wall and do all sorts of bad things. The others were furious about it.” The sub-inspector is reluctant to explain what he means by ‘bad things’, but suggests that Dalit youngsters using the compound to play volleyball would count as an example. He also hints that they had been using the compound to attend “nature’s call”. “This is ridiculous,” says Thalaiyari, a Dalit social worker who intervened to control tempers, “This shows what they think of lower caste people. In fact, it is a place used by Dalits for worship.” For

decades, there has been a Dalit temple (of goddess Parvathy) adjoining the water tank, and they lost unrestricted access to it once the compound wall was built. For worship, the tank operator would grudgingly open the gate for two hours every morning and evening.

Of the violence on the second day, the police offer no explanation. Power and water was restored to Sathamangalam Pet only 15 days after the cyclone. For more than a fortnight, Dalit villagers had to walk 2-3 km daily to fetch water from sources other than the water tank.

Paloor village in Tamil Nadu’s Cuddalore district has a similar story of caste conflict after Cyclone Thane. Nadu colony, the village’s Dalit habitation, got water and electricity supply restored only one month after the cyclone, 20 days later than others did. Local Vanniyars, smarting from a Dalit attempt to gain panchayat power by fielding a candidate against them in a recent election, had flown into a rage when Dalits demanded a restoration of water supplies five days after the cyclone. “On 7 January,” says Jayachandran, a resident of Nadu colony, “Murugan, the husband of our ward member Mahalaxmi, and I went to the [Vanniyar run] panchayat office. Saravanan, the president, and a few others did not even allow us to enter. ‘Get out!’ he shouted at us, but we stood firm. When we asked him the reason for the delay in restoring electricity and water supply, he told us that those who dared to field a candidate against him did not deserve any help from the panchayat. They were around six or seven people. They manhandled us. Both of us were tied to a tree and badly beaten.”

The next day, they went to the local police station at Nellikuppam to register a complaint, but the officer in charge refused to record it, and that too, after making them wait the whole day. “He told us that he would look into the matter. While we were waiting, the panchayat president and a few others came to meet the inspector. They got a cordial welcome,” says Mahalaxmi, the Dalit woman who had contested the election.

At 4 am the next morning, a police team arrived at Mahalaxmi’s house and took her husband into custody. Murugan was charged with breaking into the panchayat office unlawfully and destroying public property. He got a 14-day remand.

For three weeks, Paloor’s Dalits had to walk and cycle to Aharam village 3 km away to fetch water. Thankfully, human rights activists took note of their suffering and forced the police to file a case against Saravanan under The Scheduled Castes and Scheduled Tribes (Prevention of Atrocities) Act. This was done on 2 February, but no arrest has been made so far. “We have not yet arrested Saravanan because we know that it was a false complaint,” says P Anparasu, a sub-inspector at Nellikuppam police station, “Murugan and Jayachandran destroyed computers and chairs in the panchayat office, and later filed a counter case against its president.” According to Anparasu, an investigation is in progress under the Deputy Super-intendent of Police.

Saravanan has been available for his response. Other Dalit localities in the area, namely Periya and Kolor colonies, did not face any discrimination in relief operations after the cyclone, and it is no coincidence that they were seen to have supported Saravanan and his coterie in the panchayat election.

Caste discrimination in relief operations has a long history, says Ramesh Nathan, director of Social Awareness Society for Youths (SASY), a Tamil Nadu-based organisation. “This is not a new phenomenon. We have experienced discrimination against Dalits in relief and rehabilitation operations after the Gujarat earthquake, South Asian Tsunami and Bihar floods of both 2007 and 2008,” says Nathan, who visited villages in Puducherry and Tamil Nadu after Cyclone Thane on a fact-finding mission facilitated by SASY.

A study by Delhi-based National Campaign on Dalit Human Rights (NCDHR) has highlighted how Dalits were deprived of aid provided by governments and NGOs after the tsunami. According to its figures, 346 tsunami-affected villages were excluded from rehabilitation, and of these, two-thirds were Dalit habitations. Another study showed that Dalits were the worst affected of all by Bihar’s floods of 2007. This event, according to an NCDHR report, overturned the lives of as many as 70 per cent of the state’s Dalit population; 55 per cent of Dalits who had lost their houses did not get access to temporary shelters.

The neglect spans the country. Pick any random case, such as that of Sornavur village in Villupuram district of Tamil Nadu. It has about 750 Dalit households. But no one bothered warning them of Cyclone Thane. They were taken totally by surprise; a young man died and a girl was critically injured when an electricity pole fell on a house.

“Such negligence happens by default. It is not deliberate,” in the assessment of Prasad Chacko, national coordinator of National Dalit Watch, “The disaster management system in the country is discriminatory per se.”

Others seem to concur. “A natural disaster is ‘natural’ only at the moment it happens,” sighs Thalaiyari, the Dalit social worker, “but from the very next moment, its impact is different for different classes of people.” And that, really, is an enduring tragedy.