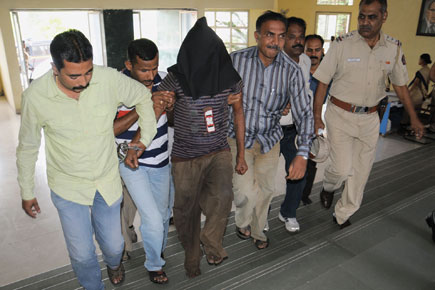 
A fully clothes male mannequin stands outside the railway station area of Kolhapur city. It is clad in unkempt clothes and looks more like a scarecrow than a model. The rain has not helped; the mannequin gets dirtier with every downpour. The teeming crowd in the station area walks past it. Most don’t give it a second glance. It is too dirty to be a trader’s ploy to attract customers. As one stops before the mannequin, the owner of the nearby makeshift shop edges near. Other shopkeepers too pause in their activities to stare. Strange. As if in response to an unasked question, one ofthe traders volunteers information about the mannequin.

It was placed there by the Kolhapur police to catch a serial killer after 10 dead bodies were discovered over four months, all with their heads smashed. The mannequin looks like a beggar and is a bizarre trick to catch a serial killer. By the police’s logic, the killer will think this a real beggar and try to kill it. They will then nab him. The police say the killer has either used a large stone or a cement brick in all his killings. No weapon has been found at the sites of the murders. Those murdered were beggars who slept on the dimly lit pavements outside the railway station. The modus operandi in all the cases is identical. All the killings have occurred in the wee hours of the morning, according to post mortem reports.

The killings are reminiscent of what happened in Mumbai in 1985–87, Kolkata in 1989 and Guwahati in 2009. In all these instances, stones were used by a serial killer to murder pavement dwellers. For four months, the Kolhapur police had failed to make any headway in the current killings. A source in the department said they had not found even a shred of evidence leading to the killer. Yet interestingly, within hours of the state’s Deputy Minister for Home Satej Patil demanding results, the police caught someone who confessed to two of the murders. And after months without leads, they found a witness who saw one of the murders.

Patil belongs to Kolhapur and has faced severe criticism for the serial killings not being solved. As fear spread in the city and surrounding areas, he parked himself in town and ordered Vijay Jadhav, SP Kolhapur range, to find the killer. Patil is said to have threatened to transfer Jadhav to the naxal infested Gadchiroli district if the killer was not caught within 24 hours. As it turned out, the deadline was met effortlessly.

Dilip Lohariya, the alleged ‘Stoneman killer’, hails from Chhattisgarh and is said to have owned up to the murders at the station area bus stand and at Parikh flyover. Lohariya was produced in court with his face shrouded in a black cloth. He was limping and it is suspected that he was badly beaten in police custody. RTI activist Dilip Desai, who has been tracking the case, claims to have all the post mortem reports, which show the police have been fudging the numbers of those killed. He says they have caught the wrong man. “There is definitely a serial killer on the loose. They have not found the murder weapon yet. The police are also hiding the number of deaths. I have got the post mortem reports of nine beggars who were found with their heads smashed. The police have simply registered many of the cases as accidental deaths,” said Desai.

Meanwhile, beggars have left the city after the police started rounding them up for interrogation. Some in the station area didn’t want to leave. They are being forcibly evicted by the police and sent to other districts like Satara and Sangli. At night, it is now difficult to spot a beggar in Kolhapur or its surrounding areas. Though only beggars have been targeted so far, there is widespread fear among everyone. Few venture out after dark and the business of shops and restaurants have been affected.

It is contradictory that the police continue to patrol the streets after dark even though they have caught the serial killer. In fact, the number of policemen patrolling at night has increased, lending credence to Desai’s accusations. The police’s dependence on mannequins to help in the investigation is patently absurd. “We have only got a confession for two killings. We feel that the murders could be the handiwork of a mentally unstable person. This person will think that the mannequin is a beggar and try to attack it. We want to catch the person in the act of attacking the mannequin,” said Jadhav.

Tarachand Teli, a small time trader from Miraj, a town in Kolhapur, likes to walk down the station road late in the evenings when he visits the city. He stopped doing it after news of the murders spread. “I am scared now. The killer is out there,” said Teli.

He echoes the sentiments of many others who come to the city to visit its famous Mahalakhsmi temple. They would travel from rural areas and neighbouring towns and stay the night to sightsee or relish the food in the eateries. Those who could not afford hotels or lodgings slept on the pavements at the railway station or bus terminus. But now they try to reach Kolhapur early in the morning and return home immediately after darshan.

“Mera beta tuition ko jata hai. Late hota hai shaam ko. Woh akela aata tha, abhi nahi. Uske papa ya meh jati hu laneko (‘My son goes for tuitions. It gets late in the evening. He would come alone but not anymore. Either his father or I go to fetch him back’),” said Vasanti Patil, a home maker.

Women, especially, are confining themselves to their houses. People who stay near the station area do not even walk around in the compound of their housing societies after 7 pm. The once bustling station area wears a deserted look at night.

In the absence of any scientific profile of the killer, many have started to believe that it may be connected to black magic. “It is easy to kill someone sleeping in the open. The skull is very important in black magic as it is the root of all evils. All evils grow in the head,” said Sunil Joshi, a pujari. “All the bodies have been found with their heads smashed. It is definitely connected to black magic.”

Kolhapur’s temples have seen increased visits by the city’s residents. Some have conducted havan puja to keep their families safe. Sales of raksha sutra, the red or black thread worn around the wrist, has increased manifold. It is believed to keep the wearer safe from evil spirits. Prior to the murders, a 15 cm thread sold for Rs 2, now it is priced at Rs 5. Business has been brisk, says Shivam Gangurde, a vendor.

Stoneman killers have been one of the most elusive and mysterious entities in the history of Indian crime. Whether it was in Mumbai, Kolkata or Guwahati, the police found no clues. To date, the police in those regions do not know whether it was one man or woman or a group. What seems disconcertingly similar is the manner of the killings, a blow to the head either with a stone or a concrete block.

From 1985 to 1987, 12 pavement dwellers were found in Mumbai with their heads smashed. The killings happened in the central suburbs of Sion and Matunga. Then too, fear was so pervasive that people stopped leaving their homes after 7 pm. Like the 10 Kolhapur victims, all the 12 pavement dwellers in Mumbai were killed in the early hours of morning while asleep. They were rag pickers and beggars who slept alone in dimly lit streets. There were no witnesses. The similarities do not end there. The victims could not be identified as they did not have family members or relatives. The killer used a heavy stone to crush the head of his victims; a 30 kilo stone was found near all the dead. Sniffer dogs turned up nothing. There were no fingerprints.

The Mumbai killings stopped as abruptly as they had begun. Then in 1989, it was the turn of Kolkata, where ten persons, all beggars, were found dead with their heads smashed. Investigation inputs were shared between the Mumbai and Kolkata police but no evidence was found to confirm that it was the handiwork of the same killer. Only the manner of the killings was the same. In Kolkata too the killings stopped suddenly. In 2009, nine beggars were found dead in a similar manner on the streets of Guwahati. The murders stopped within a few months.

Mumbai police sources say that, during the 1985-87 killings, there were many profiles drawn but never anything concrete to nail the killer. One of their profiles suggested the killer was someone acting on the instructions of a tantric with the aim of attaining a spiritual goal. The Kolkata police profiled the killer as ‘a well-built tall person’. The profiling ended there because of the absence of forensic evidence.

Even in 1965 and 1966, the eastern suburbs of Mumbai had seen pavement and hutment dwellers being killed. About 19 people had been assaulted with a blunt object and nine had died. A homeless man was found suspiciously loitering in the area and arrested. His name was Raman Raghav and he spent five years in prison for robbery. The police had to let him go as no hard evidence was found against him. In 1968, when people were again getting bludgeoned to death in Mumbai’s suburbs, the police started looking for Raghav. He was found and confessed to killing 23 people in 1965-66 and a dozen in 1968. He died in prison in 1987.

A movie was made out of Mumbai’s Stoneman murders by Manish Gupta. It starred Kay Kay Menon and Arbaaz Khan. According to Gupta, he was intrigued by the killings right from his childhood. “When I was a student I was told by my family that I should not hang around after school or the Stoneman would harm me,” said Gupta. It is an order parents in Kolhapur are giving their children today.