The Scramble for Credit 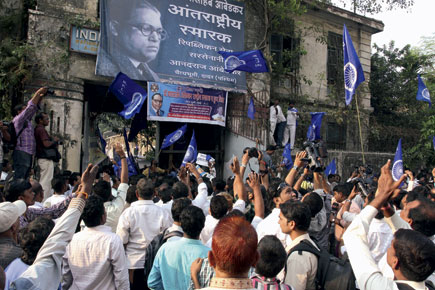 
MUMBAI ~ Uttar Pradesh Chief Minister Mayawati’s much-criticised Elephant Park and Ambedkar Memorial has achieved sentimental resonance within Mumbai’s Dalit community. Community leaders here are demanding that the state government build a ‘suitable’ memorial for Babasaheb Ambedkar at Dadar, in Central Mumbai, a place where the Dalit leader lived most of his life.

Though the demand is not new, the means of achieving it certainly are. Dalits owing allegiance to various political splinter factions are camping inside the Central Government-owned India United (Indu) Mills at Dadar. And they’ve ransacked and vandalised property, demanding an Ambedkar Park there. Indu Mills is close to Chaityabhoomi, where there exists an Ambedkar memorial already.

Every year on 6 December, the death anniversary of Ambedkar, thousands gather at Chaityabhoomi to pay homage to the late leader. Ambedkar’s mortal remains were consigned to funerary flames at this spot, now considered a pilgrimage site. Over the years, this yearly event has attracted not just domestic tourists but become a stopover on the itinerary of tourists from Southeast Asia as well.

However, prominent Dalit leaders are now demanding that the 12.5 acres of Indu Mills be converted into an Ambedkar Park along the lines of what Mayawati has done in Lucknow, UP.  The Centre has turned over four acres of mill land for the purpose, but the leaders want the entire estate.

This year, activists of a faction of the Republican Party of India (RPI) led by Ambedkar’s grandsons—Prakash Ambedkar and his brother Anandraj—stormed into the Indu Mills compound, broke police barricades and ‘captured’ the land. Since then, various other factions of the RPI have also encroached on the plot.

Dalit leaders accuse the state and Central governments of not delivering on their promises and discriminating against them. According to the Ambedkar siblings, the Centre had promised the community the entire Indu Mills estate. The four acres on offer at the moment, therefore, is just not good enough.

“We have occupied this mill land and shall immediately take steps to construct an international memorial for Babasaheb Ambedkar, a bhikshu vihar for Buddhist monks, and other facilities for his followers who come here all round the year,” Anandraj Ambedkar recently told mediapersons. He vowed that the activists “would not vacate” the premises until their demands were met.

While Vijay Kamble, a former RPI leader who joined Sharad Pawar’s NCP, sat on a hunger fast here, activists of the Ramdas Athavale-led faction of the RPI are busy blocking the Eastern and Western Express Highways and local railways tracks in protest. Kamble, who heads the Samajik Samata Manch of the NCP, says there are plans to set up a university for social justice dedicated to BR Ambedkar, an international-level memorial, a library, a hostel and bhikshu vihar on the site.

Interestingly, every RPI faction has a different plan for the site and also owes allegiance to a different political party. As a result, even the mainstream political parties—such as the Congress, NCP, BJP, Shiv Sena, MNS and BSP—are scrambling to ensure that the Dalit demands are met.

With elections to the Brihanmumbai Municipal Corporation (BMC) slated for early 2012, no party is willing to be on the wrong side of the Dalit vote. Instructions have been issued by the state’s home department, under the NCP, to deal with Dalit protestors leniently. Also, both houses of the Assembly have unanimously passed a motion requesting the Central Government to hand over the Indu Mills estate to the state government, free of cost, to build a memorial for Ambedkar.

The Maharashtra Pradesh Congress Committee has even urged the Centre to change the name of Dadar Station to Chaityabhoomi. The NCP too wants it done. And now both the coalition partners in the state and Central governments are slugging it out to take credit for having raised the demand first.

The Shiv Sena is in the game too, having tied up with the Athavale faction of the RPI to form the Shiv Shakti-Bhim Shakti alliance. While the Sena supports Athavale’s demand for Indu Mills land, it has grave reservations over changing Dadar Station’s name. Dadar is the Sena’s bastion, and, with the upcoming BMC elections, it cannot afford to antagonise the Marathi vote, its core constituency.

Dalit activists, meanwhile, know that they have all of Mumbai’s political parties by the horns. If RPI sources are to be believed, the agitation for the Indu Mills estate is expected to “heat up” in the runup to the polls.