What will the Government achieve by banning Swedish author Jan Myrdal’s entry? 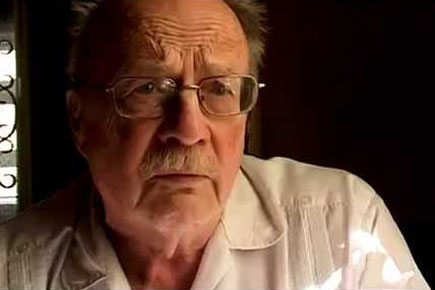 What will the Government achieve by banning Swedish author Jan Myrdal’s entry?


For many years, the Indian government has been wary of the international focus on Kashmir. On many occasions, it has banned journalists or activists from entering Kashmir, and in some cases has even deported them. But, of late, the focus has shifted to the ongoing war in Maoist-affected areas. For obvious reasons, it has made the Government nervous, prompting it to try and choke channels through which such information may reach outside India. One such step is the proposed ban on the entry of the noted Swedish author, Jan Myrdal. On 16 May, Minister of State for Home affairs Jitendra Singh, while making a statement in the Rajya Sabha, referred to him as “pro-Maoist”, and said he had, in January, attended Maoist conventions in four Indian cities including Delhi. Singh alleged that Myrdal had advised the Maoists to “garner support from the middle-class in India by focusing on propaganda against security forces and highlighting human rights issues.”

The 85-year-old Jan Myrdal is the son of the Nobel laureate couple, Gunnar and Alva Myrdal, who had close ties with the Nehru-Gandhi family. In fact, the two were personal friends of Jawaharlal Nehru. It was Gunnar Myrdal who coined the word ‘soft state’ to describe Asian states like India, which he said “were dominated by powerful interests that exploit the power of the State or Government to serve their own interests rather than the interests of their citizens.” Though Indira Gandhi had disagreements with this notion of India, she quoted this coinage in her speeches.

The Government’s move seems to have been triggered by a barrage of mails sent to Union Home Minister P Chidambaram, calling for the release of two activists who are under arrest on charges of being Maoists. Many of these mails have come from Sweden, where Myrdal is based. Myrdal seems to have first ruffled the Government’s feathers when, two years ago, he visited Dandakaranya, the epicentre of the Maoist rebellion, and met Maoist supreme commander Ganapathi. Based on his travels, he wrote a book, Red Star over India, which was released in India in January this year. In March, he attended and spoke at a few ‘anti-war’ conventions. Open has the full text of his two speeches made in Delhi, and nowhere has he spoken about what the Home Ministry accuses him of. In one of the speeches made at Delhi’s Jawaharlal Nehru University, titled ‘Some notes on the working class and the imperialist wars’, he hardly speaks of India. Instead he talks almost entirely about the working class and the present situation in Europe. The speech is full of references to Marx, Lenin, Ho Chi Minh, the Nazi regime and ‘the new imperialist wars’. In another speech at a public meeting in Delhi, Myrdal makes it clear he is speaking only to express solidarity with “the people of India against the horrors of this war [Operation Green Hunt, an anti-Maoist operation by Indian security forces]”. “To try and do that is not an interference in the internal affairs of India. We do not tell you in India how to conduct your affairs. That is for you to decide. No foreigner has the right to prescribe for you,” he says right after.

In an email response to this correspondent, Myrdal wrote: ‘I have written about the Maoist movement and that is no secret.’ Referring to his meeting with Maoists, Myrdal wrote: ‘In my discussions with them, I talked of experiences in our countries (the aftermath of the Paris Commune 1871, for instance) and the very long struggle in Europe against feudalism (from the peasant wars of the thirteenth century to 1789). But that was no “advice,” just a comradely exchange of ideas’.

The Indian government’s proposed ban on his entry has prompted Myrdal to shoot off a letter to the Swedish foreign minister, Carl Bildt. Quoting a newspaper report on how activists from all over the world were petitioning Chidambaram through email, Myrdal writes: ‘The Indian government is obviously more and more disturbed by the growing international knowledge about and interest in Indian affairs.’ Rubbishing all claims that he had publicly supported Maoists, Myrdal writes how his publishers had kept the authorities informed of where he stayed or made public appearances and what he had said was printed as well as released on the internet. ‘The present reaction of the Indian government against me is a normal—but irrational—reaction of governments when they notice that they are being subjected to an informed international opinion,’ Myrdal writes further. He urges Bildt to take ‘a broader—and more long-range—view [of the situation in India]’. ‘The information is there in India. India is not like Chile during the dictatorship or the Soviet Union!’ he writes.

Myrdal is right. India is most unlike the old Chile or the Soviet Union. But then perhaps he has not heard of how the Indian government recently reacted to a six-decade-old cartoon.