The Rest of the X-Tapes

Only a fraction of the over 5,800 recorded conversations that lobbyist Niira Radia had with public figures and others have been revealed to the public. An official revelation of the entire set of what are known as Radia Tapes will be a significant moment in Indian democracy 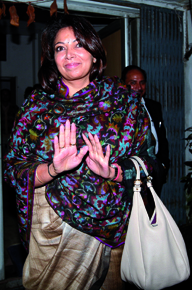 
It is possible to argue that everyone whom Niira Radia called from her phones was just stringing her along, the way an “innocent and gullible” television journalist and a “sweet-talking” columnist claimed they did in the way of defending the substance of their conversations with a woman who was until recently a seemingly efficient lobbyist for Mukesh Ambani, Ratan Tata and others. But, the Supreme Court does not have the time for humour. In fact, it has taken a grave view of over 5,800 recorded phone conversations she had with politicians, businessmen, journalists and fixers. This month the court instructed the Central Bureau of Investigation (CBI) to probe several issues emanating from her conversations, which go far beyond the 2G spectrum scam, and affect, among others, Tata Motors, Tata Steel, Anil Ambani’s Reliance ADAG and Unitech.

When Niira Radia’s troubles began in 2007, she was probably not aware of it. A mysterious and an anonymous complaint reached the Finance Minister alleging that Radia was working for a foreign intelligence agency, and that the speed with which she had built her wealth pointed to dubious dealings. The Director General of Income Tax (Investigation) suggested that her phones be brought under surveillance. After the then Home Secretary of the Government of India granted permission, her phones were tapped during two periods—one lasting 120 days, the other 60 days—between August 2008 and July 2009.

In October this year, the court raised an interesting question: when the Income Tax Department was sitting for so long on this treasure of information that pointed to several instances of possible criminal conduct, why had it not acted in any substantive manner? The answer is plain: the conversations were not in the public domain until May 2010, when one conversation was aired by Headlines Today, and more significantly in November that year when Open published some conversations it perceived to be in national interest and Outlook ran over a hundred of those conversations. Only a fraction of her recorded conversations were leaked to the media.

That the court is even hearing this matter in the form of Ratan Tata versus Union of India and Others, and that it has been concerned enough to instruct the CBI to probe several leads embedded in Radia’s conversations, is a direct consequence of the revelation of just a small fraction of what the nation now knows as the Radia Tapes, which showed how corporations influence government policy and cabinet postings. The entire set of conversations is in some kind of a sealed container with the court. The Income Tax department and the CBI have copies.

Very few people know the contents of most of these conversations but from the court’s observations they appear to be disturbing in nature.

The revelation of a fraction of the Radia Tapes has, apart from setting in motion a series of investigations against corporations, politicians and government servants, illuminated the common citizen’s understanding of how this country is being run, and resulted in the cancellation of several 2G spectrum licences that were granted to companies in a dubious or improper way.

Prashant Bhushan, the lawyer and activist, in his writ petition to the Supreme Court pleading for the full disclosure of the Radia Tapes, leaving out just those conversations that are personal in nature, states: ‘If it weren’t for some 100 odd Radia tapes that are in the public domain, people of this country would not have known that rather than the scripted government files, oral conversations in corporate boardrooms and on telephone which the persons involved have no idea are being recorded, instead more closely reflect the true process of public decision making.’

The Radia Tapes also did its service to general entertainment when in August this year Anil Ambani told a court that he had no recollection of a company that many believe he owned. “I am not aware of any company by the name of Swan Telecom Limited,” he stated. The judge said, “Sir, you are forgetting too much. Try to recollect something.” And moments later, “This is an advice to you. It can go against you that you don’t know even the names of your companies. So be careful.” Ambani, though, recognised his wife’s signature on a form that was used to open a bank account for Swan.

An official, court-sanctioned action of putting the entire set of Radia recordings in the public domain would be far more useful to the country than a whistleblower or less noble entity leaking a few portions of them to the media.

The Indian media is so firmly under the control of corporations today that it is unable to launch exclusive journalistic attempts to unearth stories that show billionaires or their companies in poor light. That time is over. In recent times, all major business scandals in India have been reported by the media as general coverage of government investigations or court proceedings. If the entire set of Radia Tapes is put in the public domain, its interpretation and compilation under the full glare of the public will be the journalistic value the media will bring to the issue. That is a process no cosy network of billionaires will be able to effectively control.

Also, a lesson from the revealed fraction of the Radia Tapes is that the media is not necessarily an ally of the citizen anymore. In fact, those conversations were with the media for months. In May 2010, when Headlines Today aired a conversation between Radia and former Telecom Minister A Raja, the public, immune to political corruption, was not moved. It was when the larger tranche of recordings carrying her conversations with prominent journalists was revealed that the story caught the nation’s attention. The media complicity was the entertaining prelude that brought home the deeper story of Radia’s dealings.

For days after Open and Outlook ran the transcripts and recordings, the mainstream media was so resolute in its pact of silence that Open taunted them in its print edition, at the risk of appearing a bit sanctimonious, by carrying two blank pages with a headline that said this was how the Indian media had covered the Radia Tapes.

After Ratan Tata went to court seeking to restrict the media from revealing the rest of the recordings, some of my colleagues and I had to essentially go door to door seeking a lawyer to represent the magazine’s view that it had the right, in public interest, to carry the conversations. We would arrive at a prominent lawyer’s office and he would tell us that he had revised his decision to represent us for a complicated reason, and we would then go to another lawyer who would say something similar. It appears that it is extremely hard for Indian journalism to match the full force of corporate India.

In the purely hypothetical situation where an editor is in possession, through no illegal means, of the entire set of Radia Tapes, what must s/he do after ascertaining their veracity? An editor is equipped to decide what is in national interest, not what is a national secret, especially when the apparent secret, which has no national security implications, is on his table. The spirit of journalism and how journalism is viewed by the Constitution, in fact, leaves an editor with no choice but to publish the conversations. An official revelation of the rest of the Radia Tapes will save at least some editors a lot of trouble.

‘Sunlight is the best disinfectant,’states Prashant Bhushan, in his writ petition. ‘Right to information is the very heart and soul of democracy. Therefore, this Hon’ble Court has repeatedly recognised it as a fundamental right guaranteed under Article 19(1)(a) of the Constitution.’ Bhushan quoted from the 1975 ruling of the State of Uttar Pradesh versus Raj Narain case, in which Narain, the Janata Party politician, had accused Indira Gandhi of electoral malpractice: ‘The people of this country have a right to know every public act, everything that is done in a public way, by their public functionaries. They are entitled to know the particulars of every public transaction in all its bearing.’

Bhushan also quoted from the preamble of the Right to Information Act of 2005: ‘Democracy requires an informed citizenry and transparency of information which are vital to its functioning and also to contain corruption and to hold Governments and their instrumentalities accountable to the governed.’ In any case, as the petition notes, most of the Radia Tapes, by their very nature, do not fit into any definition of ‘sensitive information’ that has to be protected from the public eye.