Immigrants who want to make India home are forever kept at an arm’s length by those who ‘belong’. Notwithstanding the impressive list of ‘foreign’ citizen-leaders, innovators and heroes 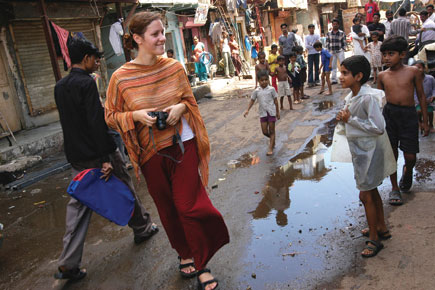 Immigrants who want to make India home are forever kept at an arm’s length by those who ‘belong’. Notwithstanding the impressive list of ‘foreign’ citizen-leaders, innovators and heroes


Sephi Bergerson, an award-winning photogra­pher who moved to India from Israel 10 years ago, was recently on a flight from Coimbatore back home to Delhi. At his side were seated “two Keralite Muslims, in long white robes, big beards, and head coverings”, and they all started to chat. Inevitably, the inevitable, fairly dreaded question arose: “Where are you from?” “I’m from India,” Bergerson replied. They refused to accept it. “They said: ‘But you don’t look Indian!’ and I answered, ‘Well nei­ther do you!’ It got them thinking, I hope.”

“Like so many of us who have moved to India,” says Laurie Kahn (name changed on request), a jeweller from the UK living here for 20 years, “I went through many phases. Falling in love with all things Indian; realising how little I actually understood; being critical; longing to belong. I threw myself into Becoming Indian with a pas­sion: wearing only salwaar kameez; attending the mandir for morning puja, learning Hindi and making my own ma­salas, eating while seated on the floor, quoting Tagore, watching only Bollywood movies (and memorising Sholay). I even tried to dance Kathak (I was terrible at it). I loved all this, but still, no matter what I did, I was seen and treated as a foreigner. Slowly, I started to feel ‘Well, screw this!’ I work here, I make love here, I pay my taxes. I breathe this air and drink this water. I plan to live out my life in India. So I will eat what I want and dress how I wish, and if I can never be seen as a pucca Indian, well so be it.”

There is a demographic group in India not quite recog­nised, mostly seen as an enigma, as a temporary and not terribly significant phenomenon: they are your immi­grants, your neighbours who have chosen to make India their home, temporarily or forever, because they like it better than the places they came from. But many who have moved here consistently report that in India, one re­mains an ‘outsider’ forever. The question arises: can one possibly ever become Indian? There are certain ethnic groups (Parsis come to mind, and the ancient Jewish group ‘Bnei Yisrael’) who have come to be ‘fully Indian’ after many generations, but we speak here of those who have been arriving as individuals—mostly from Western countries—in a constant trickle since Indian Independence.

‘India is the most difficult country in the world to relo­cate to and in which to assimilate with the local popula­tion,’ according to a recent media report that quoted a study done by HSBC Bank, polling 4,000 expats in 100 countries. Before you roll your eyes and exclaim, ‘Oh no, those foreigners complain too much,’ let me put this forth: although the angst of the immigrant who feels ex­cluded may not be as pressing as our other major social ills, the strength and vibrancy of a society rests, among other measures, on its ability to absorb and assimilate ‘outsiders’. Yes, India was once colonised and is, therefore, suspicious of ‘outsiders’ and their motives, but hey, that’s over now, no? India is not in danger of being re-colonised, at least not by the likes of us, with our FabIndia kurtas, tul­si masala chai and Bollywood dance classes. And if we are bringing with us a host of other ideas, foods, fashions, ways of raising kids, why fear it? Cultural and ethnic di­versity make a culture stronger; surely, it is the secret be­hind the US’s success.

(There is another small matter while we are at it: non-Indians in India dislike being called ‘foreigners’. We re­alise it is apparent from looking at us—and at our skin co­lour—that we are not originally from here. We know it is obvious from listening to most of us that Hindi, or any of India’s 17 official languages, is not our mother tongue. And yet, we wish we were not being reminded, on a con­stant basis, that we are seen as and thought of as foreign (like a ‘foreign object’ stuck in a patient’s throat). We long to belong to the place where our heart is. We wish to place a ban on the F word.

Last month, we in India narrowly escaped another cri­sis involving high-level sensitivities on that subject. It started when Katrina Kaif casually pointed out that she, like Rahul Gandhi, was of mixed ethnic background, and so what? So what, really. But this naive remark brought down a fast and powerful wrath upon her head, and she was forced to issue an apology, with her stray remark threatening to expose us once again to a discussion about the Asli Hindustaniness of those who lack desi DNA. As an elated BJP bigwig said, “Rahul doesn’t even know what a samosa is. Which Indian wouldn’t know that? How can such a person be the face of the nation?” and to this, I say, “I know what a samosa is, sir! Choose me!”

I jest, of course (and not about the samosa). Leaving the inanity of such political rhetoric aside, India boasts of an impressive (if rather short) list of immigrants from the West who have become Indian citizen-leaders, innova­tors and heroes: among them, Laurie Baker, Verrier Elwin, Maxine Berntsen, Romulus Whitaker, Annie Besant, The Mother of Pondicherry, Jean Dreze, Justin McCarthy, and Francis Wacziarg. “To me, these Indians are every bit as Indian as any of us, regardless of being born abroad,” says author and journalist Dilip D’Souza, who lived in the US for 10 years. D’Souza feels that the fact that we can even point to and make lists of the few who have been accept­ed as belonging here highlights a problem India has with assimilating immigrants. In Israel, for example, there is an entire governmental Ministry of Absorption, whose job is to help immigrants feel at home (whether it does a good job is another ques­tion). Contrast that no­tion with the following story: a few years ago, I pitched an idea, about an extraordinary young woman, a local hero in Bihar, to the editor of a major Indian women’s magazine. “Frankly, we are not interested in reading what you have to say on Indian matters,” I was told by this madam, “Pitch me stories from outside. We don’t like foreigners telling us about things we know better than they do, and unlike you, we have heard it all before.” I was flabbergasted. I asked her how she would react if an American editor said such a thing to an Indian-origin journalist living there. She hung up.

“I don’t believe that Indians are consciously exclusiv­ist, but cultures are essentially opaque to the outsider, es­pecially an ancient and complex civilisation like India’s,” says Pavan K Varma, diplomat, historian and author of the books Being Indian and Becoming Indian. “It is true, per­haps, that some other societies are more ‘cosmopolitan’ and welcoming, or follow a conscious policy towards this end. India possibly holds greater challenges—and barri­ers—to acceptance, but this is a matter for the ‘outsider’ to assess,” adds Varma.

“It is actually quite painful at times,” assesses Sharell Cook, author of a very popular blog called Diary of a White Indian Housewife. “I’ve been in India for over five years now, and it feels like home. I’ve adapted and settled in; even my mother-in-law says I have become Indian.

Yet, some people have the view that I have no right to comment on anything related to India, even if it is a valid observation, because I come from a better developed country. They see me as just an outsider, a guest, and have the view that if I don’t like it here, I should go back to my own country.”

But the question is not only whether Indian society can open up to newcomers, but also if and how one can be­come a member of an adopted country. The answer de­pends in part on how we define the concept of ‘Being Indian’ in the first place. If someone is born here, they are Indian no matter what they do, however spicy they like their food, whether they wear jeans or a dhoti. What about the rest of us?

“A foreigner can embrace the Indian lifestyle, but it would take several lifetimes to truly become an Indian,” says Kristy Kumari, an immigrant from the US who lives in Amritsar with her Punjabi husband and writes the blog White Bhabi. Sharell Cook agrees. “On the whole,” she says, “I don’t think it’s possible to become Indian. The main reason is skin colour and the way it’s perceived in India. White skin creates an automatic divide and the common perception of being a wealthy foreigner. Indians don’t think that any outsider can truly understand and appreciate their culture, let along completely change and adapt to it, and perhaps they are right. It may be possible to ‘be’ Indian in many external ways. However, becoming intrinsically Indian is quite out of the question.”

Varma agrees: “The latest theories suggest that one’s culture gets ‘wired into the brain’ through a process of subconscious osmosis by the age of 15, after which it is this that becomes a person’s primary identity. Outsiders to a culture can make an attempt to cross over, and some succeed better than others,” he concludes, “but the basic sense of ‘otherness’ is difficult to completely overcome.”

Some immigrants seem to be more at peace with the question of becoming Indian, happy with the degree of belonging they have achieved, and philosophical about whatever exclusion they may still feel, assuming it is part of the parcel. “National boundaries don’t mean much to me, and I am very suspicious of nationalistic pride,” says Jean Dreze, the well-known development economist who came to India in 1979 and became a citizen in 2002. “[Still], the day I became an Indian citizen was one of the happi­est in my life. It was nice to feel that I was not a ‘foreigner’ any more. Of course, I am still a foreigner in many ways: I can’t even play cricket! But becoming an Indian has brought me closer to the people I work with and care for. It is also good to feel free to do and say what I like, without having to worry about how it is going to be perceived, coming from a foreigner.”

Maxine Berntsen, 75, is an eminent Marathi scholar who came from the US 50 years ago and became an Indian citizen in 1978. “I wonder if anyone who has spent signif­icant periods of her life in two countries can ever unequiv­ocally identify with either,” says the much loved educa­tor from her home in Phaltan, Maharashtra, “Inevitably, she belongs to both. Both countries are part of me. At the same time, I suppose I am in some ways an alien in both.”

Not everyone who settles in India is bothered by these questions. “Why would I want to become an Indian?” asks Joachim Yogi Haider, an architect who moved here from Germany five years ago. “I like to look at mankind as though we are members of a huge orchestra. The mu­sic will rise only once we start playing together, each play­ing one’s own role. I am who I am. I don’t have to become an Indian to live here and love it, do I?”