The Red Heat Is On

What explains the sudden upsurge in Maoist violence? 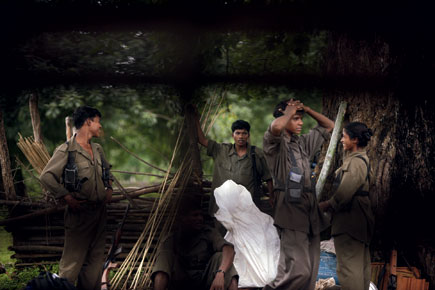 What explains the sudden upsurge in Maoist violence?


DELHI ~ After playing on the backfoot for a while, Maoists have begun to pursue an aggressive line of attack in their areas of influence. In recent months, the rebels had been lying low. This was thought to be because some of their top cadre had either been arrested or killed in police action. But now, there has been a sudden upsurge in violence in many areas. While the abduction of two Italian tourists and one MLA in Odisha, and that of the Sukma Collector in Chhattisgarh, hogged media headlines for days, there have been scores of other abductions of village functionaries and political workers. On 13 May, six CISF jawans were killed in a Maoist ambush in Chhattisgarh. Around the same time, a contractor and a jawan of the District Voluntary Force were killed in Odisha. In Jharkhand and Bihar as well, there have been many violent incidents of late, including the forced detention of a train—with rebels threatening to blow up its engine—in Jharkhand’s West Singhbhum district. This happened near the Saranda forest area, where Maoists have been inactive since last year’s sustained security operations.

As this story is being written, the police are on red alert in every Maoist-affected state. It is 16 May, the first day of their ‘Bharat Bandh’, and Maoists are on a rampage in several places. In the morning, they engaged police personnel in Sukma’s Chhindgarh tehsil, injuring 8 policemen (with two reported missing). They have also blocked the national highway in the state at several places.

There seems to be a change in the Maoist strategy after security forces entered their base area in Chhattisgarh, Abujhmad, in mid-March for the first time in 30 years. Though the operation, codenamed ‘Haka’, did not achieve much, it appears to have put psychological pressure on the Maoist leadership. The rebels have upped their ante in the months since. Of course, it does not help that in a state like Odisha, they have more or less a free run in many areas—a result of the utter ineffectiveness of the state government. Intelligence reports reveal that Maoists are expanding to new areas, particularly in western Odisha’s Bolangir and Naupada districts. It was in Naupada that ASI Kruparam Majhi was abducted while escorting a water tank meant for CRPF troops and then killed. Sources say that senior police officers are angry about how the state government has dealt with the hostage crisis. In the absence of any clear-cut directives from the state government, the morale of the police force, never very high to begin with, has slipped to lower levels still.

Recently, the Union Home Ministry slammed the Odisha government for its failure to take Maoists head on. Of course, the ministry conveniently forgets that the situation is equally bad if not worse in many other areas, including Maharashtra, which has a Congress-led government. In its Gadchiroli and Gondia districts, Maoists have unleashed what is best described as a reign of terror. Their writ is people’s command. Several members of gram panchayats, zila parishads, apart from other political workers, have been forced to resign their posts.

In Andhra Pradesh too, once a Maoist bastion, there are sufficient reports to establish a revival of the Maoist movement. This is particularly so in some parts of the state that have seen a flurry of Maoist activity. They have been conducting meetings in the Vizag agency area, where they recently killed an intelligence cop. They have also made their presence felt in two other districts: Khammam and Karimnagar, the latter being the district of origin of many senior Maoist leaders, including the slain Kishenji and Maoist Supreme Commander Ganapathi. In Karimnagar’s Mukunoor village, Maoists held a ‘people’s court’ and beat up two local Congress workers. Sources reveal that more than 150 Maoists were present all night in the village, something that has been unheard of in recent years.

All these are signs of an imminent escalation in Maoist violence. Their leadership, it would seem, has decided to make a determined bid to re-establish itself as a force that not only refuses to yield, but retains its threat potential.