The Phantom Who Fell 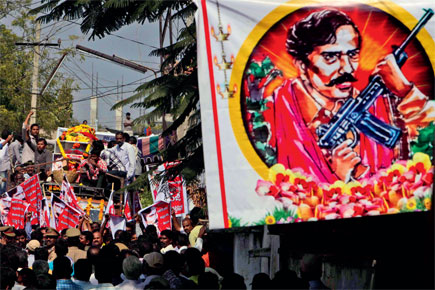 
In 2009, an extraordinary thing happened in West Bengal’s West Midnapore district. A thin, feeble- voiced man, head covered with a coarse red towel, an AK-56 rifle slung upside down on his shoulder, started making frequent appearances in front of television cameras. From his demeanour, the man looked like a university professor. And yet, the man who always had his back to the camera had, a few months ago, almost managed to kill the then West Bengal Chief Minister Buddhadeb Bhattacharjee. On the evening of 2 November 2008, an IED (improvised explosive device) set up under his supervision narrowly missed Bhattacharjee’s convoy. What happened afterwards was something the man and his comrades used fully to their advantage. The police came down heavily on the Adivasi population in the area, which led to a surge of violent protests. Within weeks, led by this man, the whole area turned into a ‘liberated zone’. And so it remained for almost a year.

The national media swooped in on Lalgarh during the time, turning this man into a mythical figure. Kishenji would give multiple interviews to journalists, speaking to them in English, Hindi, Bengali, Telugu and other languages. He would face cameras the same way: reporters in front holding mikes or notebooks, and TV cameras behind him, showing only his back and his upturned rifle. Sometimes he spoke to journalists while gunshots could be heard nearby. He would also call select journalists regularly, sometimes in the wee hours of morning, telling them that it was not right to be asleep with ‘revolution’ just round the corner. In the next few months, he would be cornered many times, including once in March 2010, when reports would suggest he had been killed. But soon afterwards, he reappeared in the neighbouring Jharkhand state, issuing yet another ultimatum to the West Bengal government. He had assumed the image of an invincible phantom, someone who would move silently like the fog, crossing state after state at will.

That myth finally broke last week when his bullet-ridden body was found in one of the areas he lorded over. The security agencies had finally got him. His rifle and the same red gamcha (coarse towel) by his side, Kishenji had finally fallen to the State’s bullets, six of them, apart from receiving splinter injuries. It is still baffling how a top Maoist leader of Kishenji’s stature (he was number 3 in the Maoist hierarchy) could be shot like this when he was supposed to have had four rings of security around him. Normally, Maoist squads don’t leave the bodies of even common guerillas behind. But Kishenji’s body was right there in the jungle, and yet, not a single other body was displayed to the media. Just a week before his death, Kishenji is believed to have told a Telugu TV reporter that the police were incapable of reaching him. Here was a man who had, two years ago, told a reporter that people in 1,600 villages were on night watch to ensure the police do not reach him, and now he lay dead, alone. There were murmurs that an insider had tipped off security agencies, offering his exact location.

It is ironic that Kishenji was killed at a time when the Mamata Banerjee government is in power, a turn of events in which Kishenji had a significant role to play. In 2000, Kishenji had helped the CPM rein in the Trinamool Congress in Keshpur. By Kishenji’s own admission, he had personally collected 5,000 cartridges from a local CPM office for use against Trinamool workers. A few years later, the tide would turn the other way, with the Maoist cadre under Kishenji eliminating CPM workers from the entire Lalgarh area. With Kishenji’s death, the real fear is that Trinamool workers will be targeted again.

Whatever the circumstances leading to Kishenji’s death, India’s Maoists have lost a very able leader, who had the rare quality of being an expert in guerilla warfare apart from being a political ideologue. It is a serious blow to their strength, considering it has come after the deaths of senior Maoist leaders like Azad and Surya (see ‘Maoist Top Guns’) and arrests of leaders like Pramod Mishra and Varanasi Subramanium. 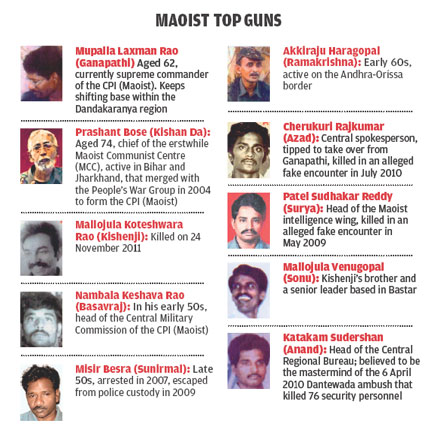 Kishenji’s real name was Mallojula Koteshwara Rao. He was also known as Bimal and Prahalad, and is believed to have started using the name Kishenji once he shifted base to the Jharkhand-West Bengal area in the mid-90s. He assumed this moniker because the party name of the chief of the erstwhile MCC is ‘Kishan Da’ and he was already a popular figure in these parts. Kishenji was born in 1954 in the Karimnagar district of Andhra Pradesh. This district has produced many top Maoist leaders including their current supreme commander Mupalla Laxman Rao alias Ganapathi. In interviews, Kishenji often said that his father was a freedom fighter (he was with the Congress Socialist Party). It was at the young age of 14 that Kishenji got initiated into radical politics during the Telangana struggle. He graduated in 1973, majoring in mathematics, and later moved to state capital Hyderabad to study law.

In the early 70s, Maoist leader Kondapalli Seetharamaiah had just begun his experiments with bringing about a revolution after the Telangana experience. He had sent a one-man team to northern Andhra, but this didn’t achieve much. That is when he thought of setting up a student and youth organisation along with a cultural troupe to work among the masses. It is around this time that Kishenji came in touch with Seetharamaiah and Ganapathi. It was under his leadership that the Radical Students Union was established in October 1974. Soon after, Kishenji went underground—the Emergency had been imposed and Communist revolutionaries were being hunted like mad dogs. After the Emergency was lifted, activists of the Radical Students Union along with the Radical Youth League and Jana Natya Mandali (two other overground organisations formed by Maoists) launched their ‘Go to the Village’ campaign in 1978. Many Maoist groups went to villages across north Andhra Pradesh and stayed there. During their stay, these activists initiated dialogues with villagers, mostly landless peasants, and turned them politically aware. This campaign culminated in the historic Jagtial March of September 1978. The Maoist cadre worked among Dalits and other marginalised people, posing a serious threat to feudal landlords. Under the Maoist leadership, the poor began to occupy land and refused to work for free in the fields of upper-caste landlords. On 7 September 1978, about a hundred thousand people from over 150 villages in Karimnagar went on a march through Jagtial town. It was an open rebellion against the feudal setup. The landlords watched in silence, hiding in their houses.

As this correspondent notes in his book on India’s Maoist movement, Hello, Bastar:

‘Due to the Jagtial march, a rare phenomenon took place, perhaps the only one of its kind till now in the history of India. The poor working class decided to socially boycott landlords who would not surrender land they illegally occupied. To these landlords, washermen, barbers, cattle feeders and domestic servants refused to lend their services. This was the social boycott of the poor in reverse. The same boycott was later extended to policemen who camped in the area to aid the rich landlords. The boycott was a huge success. All but six landlords fell in line.

Some of the landlords later retaliated with the help of the police. Village after village was raided by a joint force of the police and goons of the landlords. Mass beatings and torture took place. In Jagtial taluka alone, 4,000 villagers are said to have been implicated in false cases. Some of them were jailed and many brutally tortured. By end-October 1978, Jagtial had been declared a disturbed area.

But the men who led and supervised the Jagtial march were a contented lot. The shackles had been broken. That evening in Jagtial, as the poor masses took to the streets, two men would look into each other’s eyes and then hug each other. One of them was Ganapathi and the other his friend, later to become his trusted lieutenant: Mallojula Koteshwara Rao alias Kishenji.’

It was in the summer of 1980 that Maoist squads finally entered Bastar and other areas of what is called the ‘Dandakaranya region’ (DK) to establish a rear base. Kishenji’s younger brother, Mallojula Venugopal, who had also followed his brother, was in one of the seven squads that entered this region. Kishenji was among the first batch of Maoists to receive arms training from a fringe group of Sri Lanka’s LTTE.

Kishenji first worked in Andhra, and then shifted to Bastar in the mid-80s. He also worked in Maharashtra’s Gadchiroli (part of DK), leading guerilla squads. In 1993, he was made a member of the Central Committee (then known as the Central Organising Committee, the highest decision-making body of Maoists). He was also simultaneously put in charge of the Eastern and Northern zones. He is believed to have shifted base to West Bengal in 1995. Three years later, he entered Lalgarh and silently began working there among Adivasis. He was married to a Maoist commander, Maina, who is now the secretary of the Maoists’ Dandakaranya Special Zone Committee (DKSZC).

Kishenji also played a significant role in the merger of Maoist parties to form the CPI (Maoist) in 2004. In recent years, he had also established links with Northeast insurgent groups, particularly with the Ulfa, to establish bases in upper Assam. To this end, he had met Ulfa top commander Paresh Barua among other militant leaders.

Kishenji’s killing is part of the Government strategy to decimate the Maoist top leadership. The Government hopes the insurgency will die down if the top leadership is erased. But it won’t be so easy. Over the past few years, Maoists have suffered some big losses. But there are still senior leaders around who can hold the Maoist cadre together. That apart, leaders like Kishenji have, over the years, nurtured and trained a second line of leaders; Orissa-based Sabyasachi Panda is one such Maoist commander.

Around the same time as the Kishenji encounter, a team of doctors in Kolkata was conducting a medical examination of Soni Sori, an Adivasi woman arrested in Delhi on charges of being a Maoist. The exam clearly notes the presence of foreign bodies (probably stones) in her private parts and severe damage to her spine. This has busted the Chhattisgarh Police’s claim that she was not tortured in custody. While turning her over to the Chhattisgarh Police, the Chief Judicial Metropolitan Magistrate of Delhi had assured Sori that “not all police are bad”. Also, around the same time, urban outrage erupted over the slapping of Sharad Pawar (by Delhi resident Harvinder Singh)—with everyone from Congress chief Sonia Gandhi to the Prime Minister to Rajya Sabha MP Shabana Azmi voluble in their condemnation—but Soni Sori was forgotten. That’s perhaps why Kishenji’s death will make no difference. That’s why there will always be others to fight this war.