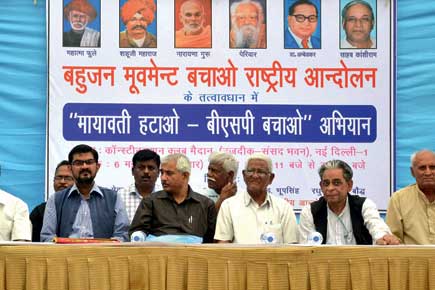 
Two months after Mayawati suffered an electoral catastrophe in Uttar Pradesh, the Bahujan Samaj Party (BSP) faces its first ever real threat of a vertical split. The revolt against the party president, which had been gaining strength for quite some time (see ‘Has Mayawati Forgotten Kanshi Ram?’, Open, 12 March 2012), burst out in the open last week. At a day-long conclave held in Delhi on 6 May, a section of BSP leaders adopted a resolution to ‘remove Mayawati from the post of president’ and start a signature campaign among party cadres throughout the country against her leadership. “We expect to complete the signature campaign in six months,” says Pramod Kureel, former MP and national secretary of the BSP, “These signatures would then be submitted to the Election Commission of India.”

Though there is no official response from the Mayawati camp to this development, sources close to her say the party president would wait for an appropriate moment to hit back at the rebels.

The conclave, held under a banner calling for a ‘National Campaign to Save the Bahujan Movement’, was attended by nearly 300 delegates, which included not just state and district level leaders but also some of the party’s founding members. The campaign’s slogan couldn’t be clearer about its specific aim: ‘Remove Mayawati —Save BSP’. The selection of Delhi’s Constitution Club ground as its launch venue is also significant, since this was exactly where the BSP had held its foundation meeting back in 1984.

One after another, speakers targeted Mayawati for dumping the legacy of Kanshi Ram, the party’s founder, and destroying the “original character, culture and objective” of the BSP by conniving with Brahminical and criminal elements. “Mayawati’s government in UP completely forgot Ambedkar’s constitution, as it was busy implementing the Manusmriti,” said Kureel, addressing the conclave. That, in fact, was the general sentiment of BSP leaders who attended the meeting, which lasted nine hours without a break.

Speaking with Open later, Kureel and Ram Prasad Mehra, an old associate of Kanshi Ram and one of the party’s founders, said that similar meetings would be organised in UP, Punjab, Uttarakhand, Haryana, Rajasthan, Madhya Pradesh, Chhattisgarh, Tamil Nadu and Kerala over the next six months. “These meetings will culminate in a much larger all-India conclave in Delhi,” Kureel added.

Signs of an all-out revolt against Mayawati were in evidence soon after the UP election results. In the third week of March, several party leaders—particularly those of the BSP’s core social base of Jatavs or Chamars—declared an open war against her, accusing her of “trampling” the ideals of Kanshi Ram and “selling” the Bahujan movement to its enemies. On 23 March, two weeks after Mayawati’s electoral setback in the UP Assembly polls, some senior BSP functionaries held a meeting at Kureel’s Delhi residence and decided to operate in parallel within the BSP in order to “release the Bahujan movement from the clutches of Brahminism” and “to ensure that the dreams of Kanshi Ram become a reality”. Mayawati had held back her punches then, but the eruption at North Avenue began to galvanise BSP functionaries across the party. The conclave of 6 May represents the first public-platform outburst of Jatav anger within the BSP against their president.

In the party’s 28-year-long history, this is the first time that party leaders of the Jatav subcaste have raised a banner of revolt. This is particularly notable because Jatavs, who account for more than half of UP’s Scheduled Caste population, have always been at the centre of the Dalit political upsurge in the state. Kanshi Ram was a Jatav, and so is Mayawati. The difference, according to the rebels, is that the founding leader always had their best interests at heart. Kanshi Ram saw Jatav solidarity as a crucial element in the Dalit bid for political self-empowerment, and therefore created a strong Jatav leadership base across UP. The rebels argue that Mayawati not only failed to nurture this base, she even worked at disempowering it.

Meanwhile, Mayawati’s silence in the face of the uprising within her party has only emboldened the rebels, who are confident that their signature campaign will reach each and every party member soon enough to effect a change before the year is out. “In the next four months,” says Mehra, “we will cover the entire country, and within six months, it will become difficult for [Mayawati] to continue [as party president].”