The Off-key Notes of a Sena Scion

Doing one thing and saying another is the signature tune of the Thackeray family. Take a look at young Aditya Thackeray’s record 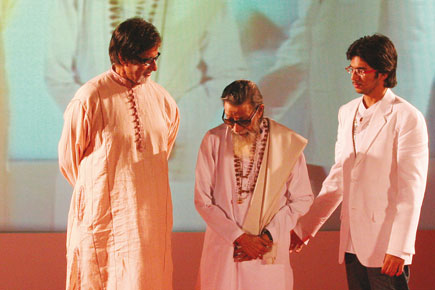 Doing one thing and saying another is the signature tune of the Thackeray family. Take a look at young Aditya Thackeray’s record


It was supposed to be the cub’s initiation into politics. With his knee to the ground, Aditya Thackeray, son of Uddhav Thackeray and grandson of Bal Thackeray, appeared in front of a crowd of supporters on Dussehra, brandishing a sword like a medieval knight. It was a classic Shiv Sena public posture. Over the years, the Sena has tried to reinforce a don’t-mess-with-us image, beating up migrants, burning books, and protesting against visiting Pakistani artistes, all in defence of the Marathi manoos’ fragile sense of identity (as presumed). As far as the saffron party is concerned, Matoshree, the Thackeray residence, is Maharashtra’s Mantralaya.

The only problem is, a sword doesn’t quite suit the studious-looking, bespectacled Aditya. This is why his battle for banning a book had to be enacted before he appeared on that stage. With that grand achievement behind him, he could at least hope to be taken seriously. The pusillanimous vice-chancellor who caved in at the cub’s very first squeaky growl was only one actor among the many who played parts in a play that had evidently been well rehearsed.

In that one moment, it was not difficult to feel both sympathy and contempt for this young man who had tried to live out his artistic dreams on meagre talent before succumbing to the raspy rhetoric that runs in his family. In 2008, Aditya Thackeray released a music album for which he wrote the lyrics and also lent his voice to a narrative and rap song.

The Sena might insist that Mumbai’s taxi drivers speak Marathi, but Aditya’s album, released by Times Music, is called Ummeed—’hope’ in Urdu. Yes, Urdu. The album’s cover bears a slightly younger Aditya Thackeray with spectacles identical to his father’s and long hair that appears to convey a poet’s resolve. But as one listens to the album, one cannot help but imagine an audition session of Indian Idol. Anu Malik and other judges sit at a desk. A contestant walks in and starts singing a few lines he says he’s  written:

What would have happened after this doesn’t take much imagination. Anu Malik would have got up, bowed mockingly, and shown him the door.

But, obviously, you wouldn’t do that to Aditya Thackeray. So, like Amitabh Bachchan, you would be more than pleased to associate yourself with the album, and even offer to launch it. As Bachchan happily did. Maybe, fresh from an ad shoot for Dabur Chyawanprash, he was taken in by the album’s title song:

In another song, titled Woh Mujhko, Aditya has even tried his skill at rap, again Bachchan-like. Except, the young man’s lyrics go like this:

Well girl, you are not my love/ Now don’t want you to follow my steps/ Listen now and listen for the last ever time/ I don’t want you, so be out of my sight

If the point of his romantic cosmopolitanism isn’t clear, he even uses French: Je t’aime ( I love you). And then there are other lyrics, which, for the scion of a party that revels in cross-border hatred, are even more interesting:

What the album lacks in poetic accomplishment, it makes up for by enlisting a gaggle of illustrious singers to lend their voices to his words. Clearly, the Thackeray name has an appeal that artistes in Mumbai find irresistible. But even their combined weight could not rescue the album from oblivion.
That is why Aditya Thackeray should consider himself lucky that he has a career in competitive demagoguery ahead of him. Much the same happened to his father’s father as well. Like his grandfather before him, Aditya seems to harbour a desire to be recognised for his artistic talents. Balasaheb was an illustrator and cartoonist who turned to the politics of hatred once he found it easier to gain fame that way, and his grandson seems to have telescoped the same transition into a much shorter span of time.

Sena watchers, though, say that the transformation of Aditya Thackeray from a teenager who loved ‘light movies’ to a sword-wielding senapati was bound to happen anyway. They say that Aditya is seen as an antidote to Raj Thackeray. So, it is just a matter of time, they say, that a one-time fan of John Lennon’s anti-war poetry will be seen stirring up bigotry and rage against the Sena’s target groups.

Of course, the hypocrisy Aditya Thackeray is displaying actually runs quite deep within the Sena. In 2007, Aditya published a 77-page poetry collection (most of it in English, with only three poems in Marathi) called My Thoughts In White And Black. So, while the Sena expects Mumbaikars to speak and read only Marathi, the youngest Thackeray has no trouble publishing poetry and rapping in English. After all, he is doing just what his father and grandfather have done over the years.

In the late 1990s, Bal Thackeray lambasted those who wore jeans, calling it an “import” of Western culture. Now, however, Uddhav is seen wearing jeans most of the time. Asked why he wore what his father once denounced, he is believed to have said that he only wore Indian-made jeans. Also, for all its anti-north Indian rhetoric, the Sena organises Chhath Puja—dear to Bihari immigrants—every year at Juhu and Chowpatty. Uddhav attends it and shares a dais with several of Mumbai’s Bhojpuri actors.

From all the evidence, it is clear that the demagoguery that comes naturally to Balasaheb does not sit easily on Uddhav, who is seen as relatively mild. Since the cadre need the sort of sparks that get them all charged up, the party’s hope now rests on Aditya. The day after his Dussehra initiation, he addressed a Sena crowd on a proposed merger of party offshoots. He spoke in Marathi, but the farce of using a language he was not well versed with made itself evident. Aditya Thackeray grandly declared that the party’s youth wing would be disbanded (barkhast karnar) instead of merged (vileen karnar) with its student wing. Murmurs ruffled through the crowd, and his father had to come to his rescue. Perhaps the cub would have been better off speaking in Hindi or English, but then what would the Sena do with him?