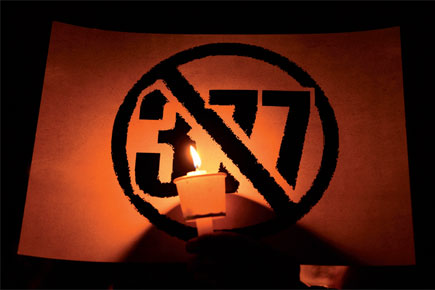 A television astrologer is the lead petitioner in the case that has turned me, along with millions of other Indians, into a sexual criminal.

One of his bedfellows is a bushy-bearded guru in orange robes who claims he can cure my lesbianism with yoga. (Maybe it’s an alignment problem, like scoliosis?) The others signatories to the lawsuit are right-wing religious types so radical that each one believes all the others are doomed to hell.

It is this fringe minority that the Supreme Court of India has chosen to valorise with its two recent decisions upholding the curiously archaic law known as Section 377.

On 11 December, the Court upheld the bit of the law banning ‘carnal intercourse against the order of nature’ (translation: penetration of the wrong holes). Since then, we have seen the right-wing radical fringe gain new legitimacy. Night after night they pop up like rabbits to shout out bigotries from the many small boxes that divide our television news-and-debate shows. They stage anti-homosexuality marches, a phenomenon scarcely seen in India since the movie-theatre-smashing phase of 1998 over the film Fire. They plaster our walls—whether gay groups on Facebook or election hoardings in Madurai—with posters calling for stricter punishment.

Not even life in prison, the penalty prescribed by Section 377, will do. These extremists do not want us jailed, closeted, or even cured. They want us dead.

Death penalty for gays. Death to all sexual rebels. Death, rapes, or lashes with the whip for women who choose their own partners, for inter-caste couples, for anyone who dares transgress the ancient laws of Manu, which coincide conveniently with the archaic laws of Victoria.

But India is a free nation; the world’s largest democracy, no? Here are some of the freedoms the Court has now endorsed:

At a middle-class urban dinner party, a guest now feels free to suggest electrocution for “the gays”.

In a medical facility, doctors and psychiatrists now feel free to pursue ‘cures’ for homosexuality, against the tide of international medical expertise (the head of the World Psychiatric Association is a gay man of Indian descent, but no matter).

In a corporate workplace, a team now feels free to harass an openly gay employee with homophobic jokes and slurs.

In the streets, the police now feel even greater freedom to harass visibly transgender people and pairs of men who look suspicious.

On Sunday, 26 January, military planes swooped and screamed above my home as part of Republic Day festivities. Children paraded around my housing society singing an off-key, earnest rendition of Saare Jahan Se Achcha… (India is better than all the world). The whole nation waved flags to celebrate the birth of the republic 64 years ago; our independence from British overlords.

But on Tuesday, the Court decided we will not claim our independence from the corseted, straightjacketed, repressed legacy of Victorian England. We will not embrace the open and tolerant visions of our numerous diverse traditions, nor the inclusivity enshrined in our constitution.

We will, instead, remain loyal to our onetime masters, who were so prudish that they did not even say ‘leg’ in polite company (‘limb’ was the appropriate euphemism). Like Victorian-era constables with nightsticks and funny hats, we will persecute, legally and extra-legally, adults engaging in sex by mutual consent.

In making their decision, the judges had to read—and ignore—the Government of India’s 77-point argument in favour of equal human rights for all. They had to glance— dry-eyed—through the petition from parents who passionately argued for full citizenship for their queer children. They had to brush over the pleas of healthcare workers who testified that driving people into the closet makes preventive work harder and subjects street health workers to police harassment.

They chose, instead, the astrologer, the baba, the fundamentalists. They chose the aberrant, hateful sexual extremists whose views no more represent the average live-and-let-live Indian than does Ru Paul.

Oddly enough, Section 377 originated as a liberal reform. Before it was instituted in 1861, people convicted of unnatural sexual acts throughout the British empire could be subject to the death penalty. Thank goodness for those progressive parliamentarians of 150 years ago, otherwise who knows what sort of law we would be stuck with; what sort of legal bludgeon would have been handed down the generations to today’s homegrown anti-sexual moralists.

The erstwhile Empress of India must be smiling in her lace-and-satin grave. Vande Mataram, O mother Victoria. The Queen is dead; long live the Queen.

Minal Hajratwala is an author, a writing coach, and editor of the anthology Out! Stories from the New Queer India