Modi’s communist admirer is contesting a bypoll on a Congress ticket. If anyone understands AP Abdulla Kutty, do write in. 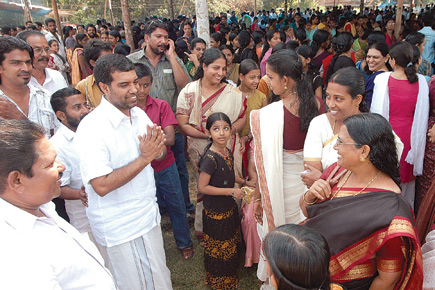 Modi’s communist admirer is contesting a bypoll on a Congress ticket. If anyone understands, do write in.


Till recently, AP Abdulla Kutty was a rare species in Indian politics. A man who described himself as a ‘God fearing Muslim communist’, this two-time CPM Lok Sabha member from Kerala was seen as an ardent fan of Gujarat Chief Minister Narendra Modi and his school of development.

Being God fearing was fine, it seemed, for his bosses at the avowedly atheist Communist Party of India-Marxist (CPM), and they even looked the other way as he gleefully defied party diktats on religion to evolve his own theory of ‘Muslim Communism’. But asking the party to adopt the Modi model of development was a bit too much. And so it was that the CPM suspended Kutty from the party, denied him a ticket for the 2009 Lok Sabha election, and then expelled him.

Narendra Modi tried his best to defend his Marxist fan. The Gujarat CM detected signs of “pushing democratic values in the country to danger” in the CPM’s expulsion of this martyr to the cause of aggressive industrialisation. “Despite being a Muslim and a communist, he praised me and my policies, and that deserves admiration,” Modi had said in February this year. But Kutty was not ready to join the BJP in Kerala, the saffron party’s chances in the state being as dim as ever. So, what did Kutty do?

He joined the Congress.

There has been a price for the 42-year-old to pay. Kutty does not wax eloquent on Muslim Marxism anymore, forget praising Modi. But there’s a prize: Kutty is now contesting a by-election on a Congress ticket to the Kerala Assembly from Kannur, a volatile town which routinely tops lists of the National Crime Records Bureau. The constituency is a Congress stronghold. It should be an easy victory for Kutty but for the effort being put in by Marxists—no pushovers in Kannur—to defeat a man they see as a traitor.

The CPM, known locally for its muscle power, has already bullied the district administration into populating the voters’ list with at least 10,000 bogus names, which could turn the count against Kutty—since the difference between the CPM and Congress’ votes (in the last election) was placed at around 9,000. Kutty’s election managers may fear rigging, but he himself is confident of an easy win in the election scheduled for mid-November. The CPM candidate is MV Jayarajan, who was Kutty’s election agent when he won the 13th and 14th Lok Sabha elections here.

If anything worries Kutty, it is the burden of his own past. Aruvapalli Puthiyapurayil Abdulla Kutty had first made his political mark as the firebrand state president of the party’s youth wing, Students Federation of India (SFI), some 15 years ago. His ideological ferocity is still remembered. “I had to share the dais with Abdulla Kutty at an SFI seminar on Gandhiji and Godse in those days,” recalls Malayalam writer VK Adarsh, “Some of my observations infuriated him, and at the end of the meeting, he threatened a physical assault if I repeated myself in any other forum.’’ Under Kutty’s leadership, the SFI conducted violent agitations against computerisation and self-financed colleges. But once his equation with the CPM came under strain, he became a big votary of a ban on agitational politics.

That’s quite a legacy to live down. Anyhow, Kutty’s expulsion from the CPM instilled him with an equally feverish patriotism. He said he would take a break from active politics to safeguard the country’s borders as a soldier of the Territorial Army. But he dropped that plan; the test and interview were just too tough to crack. Joining the Congress was easier, but only just. His local-level rivals were dead set against his entry, but a few local satraps helped him win the High Command’s confidence. Now it’s Sonia and Rahul who have taken the place of Modi in his eulogy canon.

But if Kutty wins his by-election, some of the credit should duly be assigned to a bunch of astrologers living far away in a village called Vaitheeswaran Kovil in Tamil Nadu’s Thanjavur district. The village is famous for nadi jyotisham, the art of reading a man’s destiny by studying his thumbs. Two years ago, Kutty had flouted the CPM’s strictures against superstition to have his thumbs reveal his past and guide his future. Astrologers there proved their merit by citing his exact date of birth (which his family had neglected to record) and divining a bright political trajectory for him. A man conferred with a new birthday is a man given to celebration, so he took the liberty to publish these divine findings in a popular travel journal. His CPM superiors were not amused, but reproachful mumbles were all they could come up with. And now, as a Congressman, the foretelling of his thumbs seems on its way to inevitable fulfilment.

Of course, as he reassures supporters, it’s not just about a digit at the end of his hand. It’s about his conscience. “I have joined the Congress only to wash away the sins of my past political activities as a CPM leader,” Kutty tells Open in earnest tones, “I too was part of their foolish and unrealistic policies. Now it is a purification pilgrimage.’’ He is relieved to be able to perform religious rituals openly. But on Modi, he is mum. It’s a Muslim majority constituency he must woo. This consciousness seems to have grown along the campaign trail. The CPM, he thunders, opposed his right to go on an Umra pilgrimage (a sort of off-season Haj) to Mecca and attend Ramzan prayer meetings. Kutty also accuses the CPM of confiscating the entire salary and benefits he got during his two tenures as an MP, as a party levy.

“That is a big lie. The party told him to pay a small levy which is applicable to all leaders,’’ counters CPM central committee member EP Jayarajan, who heads the campaign of Kutty’s rival. The CPM, which once sought an explanation from Kutty for running a business partnership without the party’s consent, accuses him of amassing enormous wealth through dubious means. “Look at the income statement he has given along with his nomination papers. An increase of around Rs 1 crore can be seen over his previous declaration. How it is possible for a full-time politician who claims his salary was taken away by the party?’’ asks Jayarajan.

Kutty rubbishes the allegation, attributing the income to a larger family enterprise. “The CPM disliked me for demanding an end to bandhs and hartals,” he says, “I wish the overall development of the region I represent. Only the Congress can ensure that.” Quite.