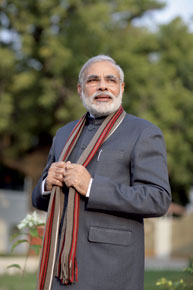 “As a rule,” she says, “I prefer clean, unshaven men.” Pria Warrick, a former Miss India America who currently runs one of Delhi’s top grooming schools, is speaking over the telephone. “But I will make an exception [for him]. He just looks so wild—like a lion in that beard of his.” After a pause where she seems to be considering her words, she continues, “And in a way, quite hot.”

An everyday conversation with an affluent woman from Delhi. Nothing exceptional or extraordinary. Except that the one whose appeal is under discussion here is the 63-year-old Narendra Modi.

Now, Modi is many things to many people. To some, an autocrat who presided over one of independent India’s worst communal pogroms. To some others, he is a symbol of change and vision. A man who created and harnessed a wave large enough to crush a political dynasty of unheralded privilege. But hot? Is Modi, the man with the stern visage—bearing down from flex hoardings with an index finger raised in warning—also leaving a deep burning blush on women’s faces? Has this General Election given the country a sex symbol?

Like many of his male supporters, many of Modi’s female followers speak admiringly of his work and world-vision, of his thundering oratory skills and the aura that surrounds him. But often, it appears, this enthusiasm borders on the devotion of a young girl’s infatuation. Some speak of his well-turned-out appearance, of his well-trimmed beard and colourful kurtas, and some of his rugged manliness.

Warrick says she first started following Modi last April when he addressed a group of the country’s top businesswomen at an event organised by the FICCI Ladies Organisation (FLO) in Delhi. Modi had not yet been declared the BJP’s prime ministerial candidate, although his many public appearances had already begun to fuel speculation. Warrick, who was attending the event, remembers looking at Modi slouched in a chair, awaiting his turn to speak, and thinking how unimpressive he looked. “I was like ‘This guy over there, he’s going to be our next Prime Minister?’” she recalls. In a hall filled with immaculately-dressed women speaking in clipped upper-class accents, Modi was wearing a regular white half-sleeved kurta. “And then when his turn came, he walked up to the microphone and said ‘Mere maatayen aur beheno’ (My mothers and sisters),” she says, “and I thought, ‘Oh my God! What is he doing?’ But I realised I was wrong. Because for the next half hour or so, all of us were completely mesmerised by him. It was like, ‘Finally, a real man to lead us’.”

According to Warrick, “There is something very innocent and virginal about him, like a single guy from an all-boys’ school, which of course the RSS is. I feel he knows how to get women’s attention.”

While Modi's election campaign has been about ‘development’, mainly, it has also been about his manliness. He has been all rage and testosterone as the owner of the fabled 56-inch chest, portraying himself as the alpha male whose roar no one dares ignore. Everyone else has appeared plebeian and humble in comparison. As some see it, he made his 43-year-old challenger Rahul Gandhi look like an overgrown teenager. The effect of Modi’s virility was in glittery evidence when a heavy-breathing Mallika Sherawat called him India’s most eligible bachelor, while another sex siren, Sherlyn Chopra, said she’d like to be his personal assistant.

In Bangalore, Modi’s appeal among women led to the formation of a female volunteer group, NaMo Bharathi, created solely to ensure that all the four constituencies in the city were pocketed by him. Rasita Anand, one of the founders of this group, says, “We went to people’s houses telling them to vote for BJP even if they don’t like the local BJP leader. ‘Just think of NaMo’.” The group was formed after over 100 female professionals in Bangalore shared their view of Modi on Twitter and discovered a common urge to come together in his support. “All of us have just two similarities—we are all women and we all support Modiji,” says Anand, who is pursuing a PhD in cyber security. Members of the group set up a temporary office, helped register new voters, went on door-to-door campaigns, and even organised talks and meets with various BJP leaders.

Poonam Vinod Lal, a software engineer who is also part of the volunteer group, says, “Just look at how respectfully [Modi] speaks to and about women. None of those pretentious, politically-correct, cutesy speeches, where they say something and do something else. Modiji says he cares about us and wants to protect us.” To watch the results of the Lok Sabha polls on television together, NaMo Bharathi’s members have took leave from their respective jobs on 16 May.

It is said that Modi is aware of his popularity among women and ensures that he is always well turned out. His bright kurtas, made of the finest linen and almost always stitched by tailors from Jade Blue, an outlet in Ahmedabad, are never frayed or ruffled. This, despite the intensity of a vigorous outdoor campaign. It helps, of course, that his hair and neatly-trimmed beard are always in place. He is known to wear only rimless Bvlgari glasses, carry a Mont Blanc pen, and it is rumoured that during Gujarat’s 2007 Assembly election campaign, he underwent a hair transplant to get himself a head full of hair.

Niyati Mehta, who runs a school in Ahmedabad and has met Modi once, says, “Within just a few years of Modi’s coming to power in Gujarat, he became a sex symbol in the state. The women wanted a man like him, and the men started buying clothes like his.” Mehta first spoke with Modi when he was invited to the inauguration of an auditorium of a management college. “I remember myself trembling as he asked what I did and why I didn’t join the BJP’s student wing. Such is his aura,” she remembers.

Last year, when Mehta was getting married, she sent him an invitation card. She didn’t expect him to show up or respond. But just a few days before the wedding, a hand-written letter arrived from the Chief Minister, apologising that he wouldn’t make it but conveying his wishes. “He is like that,” she says, “caring.”

“Women from the rest of India have only now discovered Modiji’s appeal,” says Meghna Patel, a Baroda-born actress working in Mumbai. “In Gujarat, we have known it for over 13 years.” Earlier this year—somewhat like the ‘Obama Girl’ of 2007 whose sexually suggestive serenade to Barack Obama went viral on the internet—Patel shot a series of nude photographs of herself, her intimate parts covered only by either lotuses in blossom or Modi photographs. These served as online posters, put out with the message ‘Vote For Narendra Modi’. Apart from the photo-shoot, she also created a number of self-financed and poorly-produced videos in her candidate’s support, one of which is an item song-like clip that goes, ‘NaMo NaMo NaMo/ Vote for Modi/ Vote for Modi.’

“People say they find Modiji a tough and strict man. But for me, he is going to be the first Prime Minister who I can relate to. Not one of those privileged Delhi- born politicians. I feel I understand what he’s like and where he’s coming from,” says Patel. “He’s like that single uncle you fancy who occasionally comes over for meals.” When a BJP leader from Gujarat complained to her saying her suggestive posters were not helping Modi’s campaign, she apparently told him, “You help him your way, I will my way.”