The Man with Countless Lives

You just can’t do without VS Achuthanandan in Kerala. Even the state’s rightwingers would tell Prakash Karat that 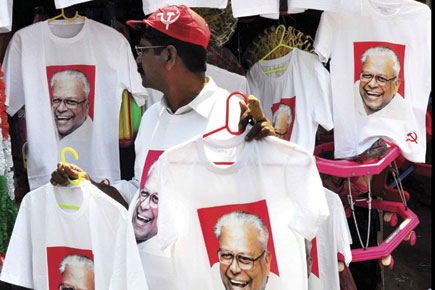 You just can’t do without VS Achuthanandan in Kerala. Even the state’s rightwingers would tell Prakash Karat that


THIRUVANANTHAPURAM Nothing like a bit of theatrics to spice up politics. Ask the CPM in Kerala, which has just completed an encore of its ‘drop VS’ drama of the 2006 Assembly elections. Finally, the haze has cleared and it turns out that Chief Minister V S Achuthanandan is still very much in the fray. The state committee’s initial rejection of his candidature followed by street protests has been dramatically reviewed by the ‘available Politburo convened at AKG Bhavan in New Delhi.

Even the dates are surprisingly similar. It was on 15 March 2006 that the party state secretariat had decided not to field VS. The days after that saw fierce protests by party workers and sympathisers across the state. On 17 March 2006, seven of fourteen district committees passed resolutions demanding VS’s candidature. On 21 March, the Politburo reviewed the decision and decided to fight the battle under the leadership of VS Achuthanandan after all.

This time, it was on 16 March that the state secretariat decided against his candidature. The next day, the state witnessed isolated protests, though not as furious and emotional as those in 2006. But this time, the Politburo did not wait and convened on the 18th itself and turned down the decision of the state unit and declared him a candidate for the 2011 Assembly polls.

So it seems that Marx is partially correct when it comes to the CPM in Kerala. History repeats, but we don’t know yet whether as a farce, tragedy or both. To find out, we will have to wait till 13 May.

The Kerala CPM is different from its counterpart in West Bengal in many ways. The West Bengal unit of the party does not have a fighter like VS Achuthanandan who cuts across party lines and is adored by the masses. The party in Bengal has not been as exasperated by the vociferous presence of the media which keeps a close eye on developments in the ruling party, as it has in Kerala. In Bengal, decision making is confined to Alimuddin Street in Kolkata, but in Kerala, decisions seem to be made on the streets. The Politburo revises its decisions according to popular protests, which is quite uncommon for a cadre-based party like the CPM.

In both states, the party is all set to face self-embraced persecution, but for very different reasons. In Bengal, the reasons range from the complacency and lethargy that comes from an unchallenged 34-year reign to mounting corruption to the forceful imposition of neo-liberal policies such as seen in Nandigram and Singur. In Kerala, the cardinal problem is the infighting within the party which has grown to the level of open confrontation between the leaders of two factions: Pinarayi Vijayan, who leads the state unit as its secretary, and VS Achuthanandan, who is Chief Minister.

Indeed, the fact that a cadre-based party like the CPM has a leader like VS Achuthanandan is in itself unusual. Cutting across party lines, VS has managed to enlarge his catchment area. His outstanding performance as leader of the opposition during the 2001-2006 Congress-led UDF government in Kerala made him a leader of the masses. His relentless battles against corruption won him many supporters. The infamous Palmolein scam in which the late Congress leader K Karnunakaran was an accused is one of its kind. Another is the Edamalayar case in  which the UDF leader R Balakrishna Piilai has recently been imprisoned. The 2007 eviction drive in Munnar, a tourist hot spot in Kerala, was another initiative that made him a popular leader of the masses. The demolition of illegal structures on encroached land in Munnar was implemented by a team of three bureaucrats known for their integrity and closeness to the VS camp. Though he failed to see the good work through in Munnar, he successfully created the impression that his mission had been thwarted by his party. He also walked on foot to the top of  steep hills and interior forests  to catch encroachers red-handed.  His declaration that harassment of women would not be tolerated under his rule made him a favourite of women’s groups and leaders like the former Naxalite K Ajitha.

VS’s active efforts to fight his rival faction within the party, largely with the help of the media, have also been effective. Instead of denouncing the media as the caravan of capitalism, VS and his media managers cultivated them and fed them with titillating pieces of ‘inside information’ on ‘party secrets’. Obviously, most of this leaked information hit his rivals hard.

The Pinarayi faction, on the other hand, is quite incapable of handling the media. Vijayan often turned his back on them, criticising the active presence of a ‘media syndicate’ conspiring against the party. He often ridiculed journalists as ‘gifted with ignorance’. Returning the favour, the media rigorously and consistently followed up corruption charges against him, prominent among them being his alleged involvement in SNC Lavlin case.

He has not been supported by his party in his legal battles against UDF leaders. So both his opponents and comrades were stunned by the recent Supreme Court verdict in the Edamalayar corruption case, in which Balakrishnappillai has been sentenced to a year’s imprisonment.

Thus, in spite of the ruling LDF government having many accomplishments to its credit, the Left has failed to reap the benefits from these. Blame the acerbic infighting wracking the party. In fact, the Pinarayi faction had already reconciled itself to sitting on opposition benches for the next five years. But the scene has changed all of a sudden, thanks to, once again, the ‘magic’ of VS. The recent expose in the infamous ice cream parlour case in which IUML leader PK Kunjalikkutty was allegedly involved, has put the UDF in the dock. This was one of the cases in which VS had invested a lot of effort during his tenure as leader of the opposition.

An MoU has been signed for the long-awaited smart city project billed as the state’s dream infotech project. VS has succeeded in creating the impression that neither the party nor any ministers in his cabinet had any stake in the successful accomplishment of this smart city project. The opposition, jubilant over corruption charges raised against VS’s son Arun Kumar, had to shut up when he readily welcomed a CBI investigation on the matter.

This ‘magical touch’ in the last phase of the LDF reign has made an ‘easy walkover’ for UDF highly improbable. VS has once again delivered the clear message to his party that he is the only leader capable of leading his party to victory in Kerala. The hostility inherent in the  infighting took its ugliest turn at this crucial juncture: the state committee, in which Pinarayi Vijayan holds a fair stake, decided against his candidature.

But VS has been slammed by intellectuals and minority groups for his anti-Muslim statements .VS  strongly resisted his party’s decision to join hands with the PDP in the recent Lok Sabha polls. Though Abdul Nasar Madani, chairman of the PDP, had been exonerated after ten years of imprisonment as an undertrial for his alleged involvement in the 1997 Coimbatore blast, VS apparently kept a distance from him. Madani had been arrested soon after the Lok Sabha polls by the Bangalore police for allegedly hatching another conspiracy for the Bangalore blast of 2008.

The CM’s statement that Muslim organisations like the PFI have a deliberate agenda of trying to expand the Muslim population was another instance of VS’s tough stance. When the ABVP and VHP expressed their public appreciation of  VS for his Muslim bashing, it was an unfamiliar compliment for the CPM in Kerala.

His political foes maintain that factionalism has been in VS’s nature from the beginning. He is the lone surviving leader among those who walked out of the central committee of the undivided CPI in 1964 to form the CPM. During the Indo-China war in 1962, he sided with nationalists in the party, supporting the Centre. And when he participated in a blood donation camp to help Indian soldiers, he was demoted within the party. He has faced disciplinary action thrice after that, with the expulsion from the Politburo in 2007 being the latest. All of these punishments were meted out for alleged factional activities.

VS is now the pivot of Left politics in Kerala. Even the Right wing media carried banner headlines such as ‘We Yes’ on the day the Politburo upheld his candidature. But traditional wisdom suggests that no party or front in Kerala wins elections twice in a row.