Even today, women are brutally assaulted and paraded naked for being ‘witches’. These victims from Deoghar and Ranchi districts bear telling witness. 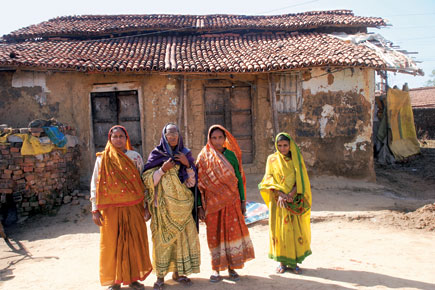 Even today, women are brutally assaulted and paraded naked for being ‘witches’. These victims from Deoghar and Ranchi districts bear telling witness.

The Women and Child Development Minister Krishna Tirath made the announcement on the need for a separate law, in New Delhi, on 18 January. Earlier that day, about 1,200 km away, in a little village called Itki, half-an-hour’s drive from Jharkhand’s capital city Ranchi, four women (declared ‘daiyans’—witches) in their villages had created history by addressing a gathering of judges (that included a Supreme Court judge), lawyers and top bureaucrats.

Poor, illiterate and tribal—could these women, caught in the grip of superstition, feudal laws and modern bureaucracy, be any farther away from the inside of a courtroom? From the inside of a mud house in a forsaken village, they now stood within earshot of the Chief Justice of the Jharkhand High Court, incidentally the state’s first woman chief justice. (Talk about a paradox.) One by one, they walked up to the microphone. This was as close as they would ever come to having their day in court. And sure enough, the following day, New Delhi promised them a new law.

They were part of a 400-odd tribal women congregation that had travelled from 300 villages of five districts to meet the higher Judiciary and pull off something of a social breakthrough by gaining a hearing with those responsible for upholding justice. The enormous project, second of its kind in Ranchi, was made possible by a Dehradun-based voluntary group called Rural Litigation and Entitlement Kendra (RLEK), with the support of National Legal Services Authority (NLSA), New Delhi, and the Jharkhand Legal Services Authority. The women had come to share their stories of how government servants routinely used corruption and lies to deny them Below Poverty Line cards, ration cards, pensions, job cards and rightful remuneration under National Rural Employment Guarantee Act.

Sushila, Safina Bibi and her 75-year-old mother-in-law Sagrina Bibi had travelled six hours from Pattargatiya village in Deoghar district, where they have been declared witches and publicly tortured. That they had lived to tell their story was itself a miracle. For, typically, women who are declared daiyans are brutally killed by burning them alive or beaten to death. Almost ten years after Jharkhand passed the Prevention of Witch Practices Act, 2001, the gruesome practice of witch hunting continues unchecked and largely unpunished.

All three of them widows, Sushila, Safina Bibi and Sangirabibi were dragged from their houses and taken to a maidan (field), stripped and mercilessly beaten in front of hundreds of onlookers, who had gathered from nearby villages after word had spread that daiyans would be paraded.

Sushila, a frail woman in her 60s, is physically disabled—her left hand is not fully developed. She has no land, no ration card, no widow’s pension. “They surrounded us. They took off my clothes. They forced me to dance. They pulled my hair and beat me up. They made me drink sewage water.” Her battered body was left abandoned. It was three days before she made it back home. She had to beg people to give her some soap and clothes to wear.

Safina Bibi and her mother-in-law were dragged from their houses and brought to the maidan. The previous day Safina Bibi had been beaten with slippers by a mob of men. Safina Bibi’s nephew, Kalim, begged the villagers not to take off her clothes. He too was beaten up.
The public flogging of the women carried on for about an hour. The hundreds of villagers stood and watched as 15 men mercilessly beat and tortured three women senseless. This happened in October.

The law prescribes a three-year prison sentence and a fine of Rs 2,000 on those who inflict mental, physical or financial harassment by declaring a woman a witch. The offence is non-bailable. One wonders for whom the law exists.

Pinki, a 14-year-old girl from Tapodana in Ranchi district, was orphaned overnight when villagers murdered her mother (after declaring her a witch), her father and her sister on a night in early January. When volunteers of RLEK found Pinki, she was in hiding, afraid for her life. The chairperson of RLEK, Avdhash Kaushal, was then forced to ask other members on the dais, “Are we to wait for her too to be killed before action is taken?”

According to Meera Mishra, a fieldworker with RLEK, well over 100 cases of witch hunting take place every year. “Public knowledge is limited to media reports. But from our experience on the ground and other surveys that have been conducted, the instances of witch hunting in Jharkhand would easily exceed 100 a year. In many cases, women are murdered, and their cases are covered up and they never make it to police records.” According to RLEK’s state coordinator, Mohammad Omar Khan, the majority of cases of witch hunting are instigated by relatives who are after the woman’s property. “Very often, relatives get the villagers to declare a woman a witch. Once a woman is branded as such, she is either killed or considered mad. The relatives then take over her house or property.”

Ignorance is bliss. To the secretary of the NLSA, V Sarathchandran, who was visiting from New Delhi, it came as news that such practices existed in India. “After hearing your stories, I became emotional,” he told the women. “This is the first time I am seeing the real problems. It is hard to imagine that such things exist in a modern world. I did not know this was such a grave problem.” Sarathchandran announced that the NLSA would conduct socio-legal research in the state to document the extent and severity of the problem.

There is no dearth of laws to protect the disempowered. But the elaborate law enforcement machinery seems unashamed of having witch hunting practised so blatantly and with such impunity on its watch.

The three women have now returned to their villages and lives. Before they left, Safina Bibi wanted to know what would happen next. “We are scared. The villagers who did this to us have been released. They are threatening to beat us up again. They said they will drag us to the maidan. Something has to be done. They should be punished.” Despite the brutality of the crime, a village full of eye-witnesses, and an exclusive law to protect them, Sushila, Safina Bibi and Sagrina Bibi remain utterly vulnerable.