The Home That Never Left Us 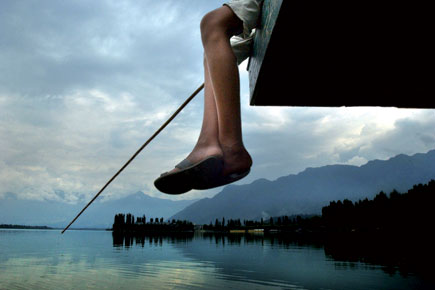 
In the early 1980s, when we still had a home in Kashmir Valley, I went to a school named after Henry David Thoreau’s ‘Walden’. Every morning, after assembly, children of all classes sat on jute mats and recited names of countries, continents, rivers, oceans and parts of the nose, among other tidbits of general knowledge. We were particularly delighted when it came to naming African nations because we got a chance to mispronounce Angola as ‘Bangola’—which in Kashmiri means ‘firecracker’.

When I was in class four, my father had me shifted to my sister’s school. “That way,” he said, “both of you can be together and I won’t be worried.” Somehow, Father was always worried about me. That also meant that I hardly went on excursions to Aharbal waterfalls; Father feared that some bully might push me in. Every other year, we heard of a school kid being swept away by the rapids.

My new school was next to Srinagar’s Iqbal Park, where a year before my joining, a few rowdy men had displayed their genitalia to Prime Minister Indira Gandhi during a public rally. Of course, Father never told me about this. It was only through a classmate who boasted that his uncle was among those men that I learnt of it.

Father didn’t know, but I did have my share of adventure. One of my forbidden thrills was to slither down a wooden pole behind my first-floor classroom to the ground. Also, there was a graveyard beyond the school wall, and some of us would sometimes jump across to gather earth from a fresh grave. A friend’s father had told him that this earth could turn an active person passive. We placed some of it under the chair of a teacher whose belief in the rod—often a clump of nettle grass he used as a punitive weapon—was extreme. A couple of times, we thought it had really worked. But then, someone spilt the beans and my friend was thrashed with nettle grass. We had to use the same earth to soothe his legs with mudpacks. In the evening, after the school bell rang, we would rush out to the old gatekeeper, who made us hold each other’s hands to form a chain that he then joined to help us cross the road. From there, we would walk through a street named after Kashmir’s last Maharaja and then saunter into Lal Chowk, past Amira Kadal bridge.

On Tuesdays, Hindu boys would stop at the Hanuman temple for boondi dipped in sugar syrup. Often, we also stopped by at Kapoor Brothers stationers to greedily look at Capital notebooks, Camel geometry boxes, Ajanta fountain pens, Peacock diaries and other pricey stuff.

There is nobody left to feast on boondi.

But did Kashmir ever leave us?

Every time I climb the stairs to my Gurgaon apartment and ring the doorbell, I am reminded of the fish-shaped bell we had at home. Beside it was a blue-coloured board of the water works department bearing our connection number: 44732. Sometimes, when father talks too much of home and of how much timber he had ordered weeks before we were forced to leave, I feel like visiting one of those shops in Connaught Place that make rubber stamps and name plates and get a similar board made, with the same number.

But that will change nothing. Our heart will be in Kashmir, or Kashmir will be in our heart, but we will still live in Gurgaon, climbing to the terrace every morning to check the water level in the tank and then planning our day accordingly. A relative will visit Kashmir and return with a pile of pink eggplants and red radish and vost’e haakh that leaves rice with a red hue. A portion of it will be sent to us, and for a few days, Father will smile every time he lifts the lid off the dinner bowls. Sometimes, he will insist that we eat on the floor in his room like good old times. Those are the only times he has a second helping of food.

Since we left Kashmir in 1990, Father has never returned. I have visited regularly, though, and every time I visit I click pictures and play a sort of quiz with him. Ditto when images of the Valley appear on television.

Fire in Secretariat: “Okay, Dad, so tell me where this wall is?”

It takes him about five seconds: “Hmmm… this is right next to Jahangir hotel.”

And then it is a phantasmagoria of sorts.

That is Lal chowk, where once upon a time, a bookshop had painted on its outer wall this quote by Desiderius Erasmus Roterodamus: ‘When I have a little money, I buy books; and if I have any left, I buy food and clothes.’

Move a little ahead, cross a narrow road, and you are in Habba Kadal, named after a poetess whose songs even few of my non-Kashmiri friends know by heart since I’ve sung them so many times in a drunken stupor. It used to be a maze of houses, occupied mostly by Kashmiri Pandits. They are abandoned now, barring a few. Then you had the Ganpatyar temple closeby, where students would offer laddoos to appease God to pass their exams. Now special prayers are held there by a handful of Pandits who did not leave and some of us watch it live on the web.

It is here on the Habba Kadal bridge that they brutally killed the young Naveen Sapru in 1990 while he was returning from office. I have written about him in my Kashmir memoir—of how he was shot and grievously wounded first, of how the crowd showered shireen over him as is done on a corpse, of how they danced after he died. But I missed a small detail. As my friend Vinayak Razdan wrote later in a blog:

‘They say when the killers shot him down on that bridge, the man fell to ground. His killers, with pistols in hand, came around to check on him and to make sure he was dead. The man on ground, in pain, raised his one hand and told his killers, ‘Bas. Be ha Mudus. Stop. I am already dead.’ A killer shot him through his hand.’

It is also here in these bylanes that a man called Bitta Karate roamed about, sniffing for what he called ‘Batt’e mushie’k’ (the smell of a Pandit), and once he got a whiff, he would then draw out his pistol and kill the source of that smell. He still passes through these lanes, except that there is no need to scout for any such smell now. Also, he sees himself in politics now and that is why, sometimes in June, on the day of Jyeshta Ashtami, he visits the Kshir Bhawani shrine and poses with members of the Kashmiri Pandit diaspora. He is especially adept at walking up to an old lady and holding her hands with his, stained with the blood of at least 20 Pandits.

I went to Kshir Bhawani last month, running all the way at 05.30 hours from Kashmir University to the shrine, a distance of roughly 20 km. For years, my grandfather refused to leave his village and come and stay with us in the city because every day, before sunrise, he would walk up to the shrine and spend all morning there. When I go, I call Father from there and make him listen to the sound of the bell ringing over the phone. He doesn’t speak at all afterwards. He is transported back to his village.

The next time he and his brothers meet, they recall moment after moment of their lives back then. The last time round, my uncle remembered a tragic figure in their village who was always brought to tears singing Pyaar ka bandhan toote na from the 1961 film Shola aur Shabnam.They were in splits remembering an impostor who had pronounced himself a saint, and who, one day, upon being asked by a pregnant woman of her child’s gender, closed his eyes and said, “There are only two types of fruit. So it will be either one or the other.”

On my way to Srinagar airport to catch a flight back to Delhi, I asked the driver to pass through my old school. I always did that. The building had been in shambles for years, but the wooden pole was still intact. But this time, I found the building no longer exists. It has been brought down to expand the road for an upcoming flyover.

Last year, in Mumbai, the filmmaker Vidhu Vinod Chopra and I recalled our days in Kashmir. I discovered that even he had gone to the same school in Srinagar many years ago, and like many of us, he too had slithered countless times down that wooden pole.

I haven’t told Vinod yet about the school. But it doesn’t matter. A building might be brought down—in that sense, it may be dead. But memory never suffers rigor mortis. So, as long as that remains alive, we will always be slithering down that pole.