The Going Gets Bloody

An attack on a BSP rebel. A defensive speech by Mayawati. Spot the link 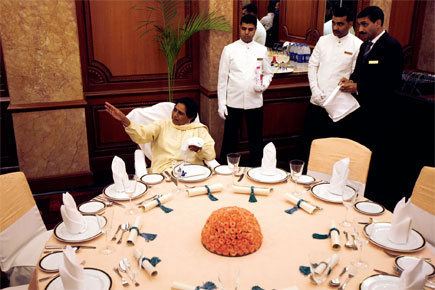 An attack on a BSP rebel. A defensive speech by Mayawati. Spot the link


NEW DELHI ~ Having silently watched the rebellion of a section of BSP leaders for the past few months, Mayawati has finally spoken out. Without referring to rebels, she asserted at a press conference last week that she was in full control of the party. The BSP President also emphasised that decisions for the party are taken by her, and not by upper-caste members of her coterie—notably, Satish Chandra Mishra and Shashank Shekhar.

Incidentally, this resounding assertion came within 48 hours of a brutal attack on rebel leader Pramod Kureel, a former MP and party national secretary, who was left seriously injured. Assaulted by a band of intruders while he was addressing a meeting at Chennai, Kureel alleged that it was the handiwork of BSP leaders close to Mayawati. “On 17 May, I was invited by some employees of the Income Tax Department at its Nungambakkam office in Chennai to deliver a lecture at a seminar on the problems of OBC employees. When I rose to speak, I was severely attacked by some 30-40 known and unknown hired goondas, including some members of the BSP’s Tamil Nadu unit. They attacked me with rods and steel chairs, and with the intention of killing me and some of my colleagues who had come with me,” he said.

Kureel also pointed a direct finger at Mayawati for being behind this attack—in which Shaji Cheraman, former president of the BSP’s Kerala unit, was also injured. While Kureel was injured on his head (he needed three stitches after the attack), Cheraman suffered a mild fracture in his hand. “I was receiving threats to my life from Mayawati for many days [before the incident],” Kureel added.

Later, a police complaint was filed at Thousands Lights police station at Chennai against Mayawati, the party’s Tamil Nadu state president Armstrong, the BSP’s Kerala state coordinator Suresh Mane, and some other local members of the party, all of whom are considered loyal to the party president.

Kureel and other rebel leaders of the BSP, including Ram Prasad Mehra, an old associate of Kanshi Ram and one of the party’s founders, were touring Kerala and Tamil Nadu last week to mobilise party cadres in support of their rebellion. The tour was part of a resolution adopted by party rebels on 6 May when they organised a day-long conclave at Delhi and vowed to ‘remove Mayawati from the post of president’ and start a signature campaign among party cadres throughout the country against her leadership. “We expect to complete the signature campaign in six months,” Kureel had told Open after that public meeting held by party rebels. “These signatures would then be submitted to the Election Commission of India,” he had added.

Held under the banner of ‘National Campaign to Save the Bahujan Movement’, the Delhi conclave had been attended by nearly 300 delegates, including not just state and district level leaders but also some of the party’s founding members. The rebels had also planned to organise similar meetings in Uttar Pradesh, Punjab, Uttarakhand, Haryana, Rajasthan, Madhya Pradesh, Chhattisgarh, Tamil Nadu and Kerala, before calling a much larger all-India conclave in Delhi.

Unrest among those belonging to the BSP’s core vote base of Jatavs, a Scheduled Caste (SC) that has always been at the centre of the Dalit political upsurge in UP (as it accounts for more than half the state’s SC population), has turned into a conflagration of anger after the party’s recent electoral rout. The rebels have accused Mayawati of “trampling” the ideals of Kanshi Ram and “selling” the Bahujan movement to its enemies.

In the party’s 28-year-long history, this is the first time that party leaders of the Jatav caste have raised a banner of revolt. The rebels argue that while Kanshi Ram, realising the significance of Jatav solidarity in the Dalit bid for political empowerment, created a strong leadership base among this sub-caste within the BSP, Mayawati has done the opposite—

not only has she denied party leaders of this sub-caste their due share of power but has even worked to dismantle the old network built by the party founder.

Mayawati, who had maintained a stony silence all through these developments, finally took to the microphone on 19 May, two days after the attack on Kureel and 13 days after the BSP rebels’ Delhi congregation. “Unlike other parties where leaders are imposed from above, I have always been in touch with the ground reality,” she announced, “I have acquired the post of party president after passing through a long journey as a party worker inspired constantly by the struggles of our saints like Jyotiba Phule, Chhatrapati Shahuji Maharaj, Shree Narayan Guru, Periyar Ji, Baba Saheb Dr Bhimrao Ambedkar and Manyavar Shree Kanshi Ram Ji.”

She also sought to dispel the “confusion being created by [her] detractors” that she was under the influence of upper-caste members of her coterie. “I am not like those leaders who depend on others for taking decisions. In every matter, I take decisions by following the path shown by our saints and gurus and on the basis of my experiences that I have acquired by working on the ground. Irrespective of the hurdles created by my opponents, I will never deviate from the line of my party’s movement,” she said.

To make things even more clear, the BSP President specifically took the names of Satish Chandra Mishra and Shashank Shekhar, and announced that neither of them could make her do what she did not want. The rebels have been alleging that under Mayawati, the party is being run by these upper-caste advisors of Behenji.

Mayawati, however, dodged all queries related to the rebellion within her party. Twice during her press conference did journalists seek to obtain her response on the Jatav uprising in the BSP, but on both occasions, she flatly refused to respond. “Please ask the next question,” was her reply on the first occasion. “I don’t want to waste my time on these absurd questions,” was her reply on the second.

Sources close to Mayawati say that she wanted to send an “appropriate” message to all BSP cadres without ceding the slightest quarter or yielding any advantage to party rebels. They say that the mere act of answering questions on the rebellion would have amounted to an acknowledgement of its existence, and thus a public recognition of such a threat, which could possibly have helped those who are trying to unseat her.

But, as every onlooker knows, the whole point of the media exercise was to contain the inner-party insurgency. One Lok Sabha member close to the BSP President says that the press conference was called in panic because she had realised that her silence in the face of the uprising was only emboldening the rebels, who were confident that their campaign was gaining in strength. Ignored any further, it would have weakened her position within the party. So the best she could do was counter her opponents’ arguments without letting on why she needed to do so at all.

Ram Prasad Mehra also believes that Mayawati’s press conference was meant to “clarify” her position to party cadres rather than “reply” to specific—and potentially bruising—charges that had been levelled against her over the past few months. “The press conference was meant to clarify to BSP workers [her stance on] the confusion she has herself created in the rank and file of the party by selling the Bahujan movement to Manuvadi forces,” he says.

Both sides now fear that if the rebels keep their campaign going, the feud may turn bloodier still.