The Dog That Bit Only Foreigners

…and had a sharp nose for national boundaries 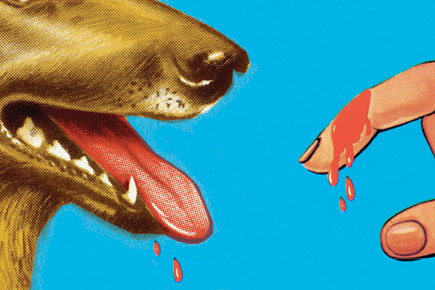 …and had a sharp nose for national boundaries


In a village on the side of a hill in Himachal’s Parvati Valley lived a dog that bit only foreigners. Its instinct for national boundaries was so acute, I was told, that the week before I arrived it even bit two Nepali construc­tion workers. I was travelling with two far more flagrant foreigners: Peter, an apple-stealing German who spent his days as a serial tourist in South Asian countries, and Leo, a foggily good-natured Dutchman in his 60s who had gone relatively clean after having to be rebooted twice from heroin overdoses.

I was the rare Indian tourist there. I had come from Manali, where I was living for a few months trying to write about my childhood, a period so beset by conflict­ing identities that I hoped the neutral vantage of tourist India might help me get on with it. I’d grown up in Bangalore, speaking one dialect of Kannada at home, an­other outside, and neither at school, where we were fined for speaking anything other than English. But my first language at school was Hindi. The rhymes I learnt, the books I read as a child were in English, usually set in the UK, sometimes in the US. For a while I hung out with the kids who met in an empty plot on the street behind my house, but I was impervious to the charms of kabaddi and kho-kho. They thought I was a poser, and I thought their flared khaki shorts ridiculous, even though I wore muted saffron trousers to my Hindu convent school. Later, I was in a rock band, singing in accents I couldn’t speak in. And I was in the NCC, where I did solemnly pledge to always uphold the unity of India.

The dog in the village—obviously beholden to some sort of canine nationalist pledge—made an attempt on Leo almost immediately. Leo returned from a walk with a torn jeans leg, astounded that such diabolism should ex­ist in the world. The dog had emerged from an alcove near the entrance of the village and gone for his ankle without warning. Dry stone walls on either side made the passage perfect for ambush. Leo recounted that while he strug­gled to break away, laughing faces had appeared at win­dows and balconies. He carried a stick and stone in either hand for the remainder of our stay. Peter began to plan his apple-orchard raids in the opposite direction. And I was filled with apprehension—what if the dog bit me? Worse than the bite, what would it say about my Indianness?

India, we are often told, lives in her villages. This one was small—30 or so families—and probably better off than most, with looms in several houses and apple or­chards nearby. Other nationalities lived here too—the village had prospered in recent years after starting to at­tract tourists. Annexes had been built to house them, a couple of dedicated guest houses had come up. The vil­lage was attractive to tourists because it was idyllic and cheap, and not least because it was within scoring dis­tance of Malana, source of the region’s best hashish. The thrice-born Leo smoked hashish the way others smoke cigarettes. He never went anywhere without a small stash, but even he’d come here almost as a pilgrim, empty-handed because it would otherwise be “like tak­ing water to the sea”.

The locals who interacted with the tourists seemed at once ingratiating and contemptuous. The kids sang out their namastes a little too promptly. The guest house I stayed in had an outhouse cafe that sold macaroni, Nutella pancakes, bottled water and toilet paper. The boy who ran it had a chronic ache in his arm, and the owner, who lived in the abutting house, told me this was because the boy ate off the same plates as foreigners. A short dis­tance away, a married man who let out rooms built around and over his house had seen it fit to proposition an Australian woman staying with him. (She had been bitten by the dog and was far more interested in her anti-rabies regime than in illicit romance.) His daughter’s birthday celebrations, held in his house, brought about a strange clash of worlds and intentions. The kids had their cake and streamers; the tourists could buy beer. Music played on a cassette player and he ordered—in Hindi—the bemused women of his house to dance. The foreign­ers shuffled about too, pleased to participate in the local culture. A plate primed with hundred rupee notes lay on the table for those who had forgotten to bring a present.

God arrived at our guest house one afternoon in a pal­anquin. The owner told me later that the gods in the tem­ples nearby often went out visiting, making their itiner­ary manifest through the ants-carrying-a-morsel wheeling and wobbling of the bearers. The visit meant that the owner had to perform a propitiation. First, the area had to be purified. The foreigners were flushed out of their rooms and herded into the outhouse, where they spent the next few hours passing a chillum around, delighted that India pos­sessed the mystic depths they’d always suspected. The men of the village gathered around the courtyard for the ceremo­nial beheading of a goat. I was allowed to stay. “You’re Indian, after all,” the owner said.

But it was the dog’s certification that mattered to me. My one encounter had ended ambiguously. I approached the dog, and it began to lope towards me with a business-like manner. I lost my nerve and retreated without being chased. I was planning to test myself with more resolve when I visited the village next, but it was not to be.

A couple of weeks later in Manali, I ran into a woman I’d met at the village. A European Buddhist with close-cropped hair, she sported a thick bandage around her right ankle. I asked about the dog. It had started proving bad for business, so one of the guest house owners had shot it. The daily injections seemed to have drained the woman of her loving kindness: “They should have killed it a long time ago,” she said.