The Disfigurement of Gujarat 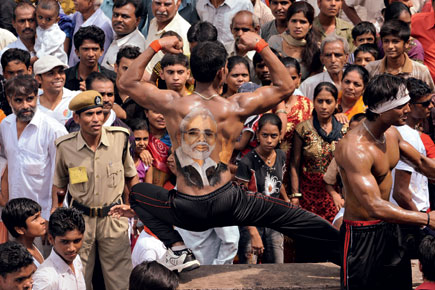 
We used to do riots in more civilised fashion in Gujarat.

In 1969, too, Muslims were punished—for reasons few can remember today, though there is agreement that they started it.

Over a thousand were killed, just as they were after Godhra; the number of shops, businesses and homes destroyed was 6,286; the number of Muslims who moved to relief camps nearly 15,000. Not very different from ten years ago.

But Congress Chief Minister Hitendra Desai could not remain chief minister for long. He left the Congress and Gujarat moved on.

In 1992 again, Muslims were punished—for having their mosque pulled down. Over 500 were killed in Surat alone. My upstairs neighbour in Surat, the handsome former mayor of the city, Kadir Pirzada, has photographs showing what Gujaratis did to Gujaratis. The photographs were given to him by his constituents, as evidence of what was done to them. The photographs are preserved in thick albums with padded covers, like wedding memories. Their material is different, of course—limbless bodies of children, mutilated faces. He pulls out the albums for people who visit him and are willing to confront reality. I think there are not many.

Anyway, Chimanbhai Patel died before his term as CM was over, and we moved on again.

That is why, this time, the riots of 2002 are different. The riots have continued. In the broadcasts of the national media, angered by the lack of repentance. In the writing of the Gujarati media, which is surprised why people care for things ten years old. In the defiant presence, above all, of the man who was and is in charge, it has continued.

We haven’t moved on, and for a few Gujaratis, it has become embarrassing because it isn’t going away.

Before looking at why it isn’t, let’s look at what an Indian riot is. It is an event that meets two conditions:

2) …and the State steps aside

The State becomes flaccid because it is composed of individuals most of whom feel the same passions as common citizens (aka the mob). In the old days, the British were uninterested in such violence politically, and in any case could control civil servants better.

But the real villain here, of course, is the common citizen. The participant, the aam aadmi, the voter. Rajdeep Sardesai broadcast an astonishing visual during the riots of 2002. He was reporting from the old city of Ahmedabad. Here a neighbourhood was at war with itself. Men and women on their roofs, on their balconies, flinging stones, fireballs, abuse, at homes a few feet away. At people they see every day going to work, at children they see going to school. Now, just the enemy.

Here’s another snapshot of violence in Gujarat.

On 20 September 1969 (this is from Communal Riots in Post-Independence India, edited by Asghar Ali Engineer), Hindus in Ahmedabad forced Muslims to shout “Jai Jagannath” after they invaded their neighbourhood and broke some things.

A young Muslim, angered by the destruction of his property, was defiant. He said he would take revenge. The angry Hindus beat him up and tried to make him say “Jai Jagannath.” He wouldn’t.

The crowd threatened to kill him. Wood was gathered from the shops they had broken, a pyre made in the middle of the road on which petrol was thrown. The young man was burnt alive.

“What is remarkable is that there was no resistance from any Hindu,” says writer Ghanshyam Shah, “the wails of the Muslim inhabitants of the area were drowned in the celebration of the incident by the Hindus.”

One of the most disturbing memories I have of Ahmedabad is from 2006 when I worked in the city with the Gujarati newspaper Divya Bhaskar.

Hindus were taking out the Jagannath Yatra. It was an enormous procession. It took a couple of hours to pass, and these Hindus took it through the city’s Muslim neighbourhoods. There was little devotion in the Yatra from what I could see. It was a show of power, of Hindu masculinity. On the flat bed of dozens of trucks, young men from akhadas, oiled and hulky, stood barechested and displayed their bodies. The Muslims, from their balconies, their roofs, watched. “Jai Jagannath!” Everyone shouted.

Narendra Modi has given Gujarat a muscular image of itself.

The disfigurement of Gujarat’s citizenry, so visible to those outside, cannot be seen from within for two reasons. The first is that Modi has defined the condition, quite brilliantly, as one of a victimised state, constantly maligned by outsiders.

Gujaratis, to their mind, are victims, not perpetrators.

The second reason is that internal resistance to Hindu chauvinism is low.

There is a very small intelligentsia in Gujarat. As in Mumbai, a city Gujarat has deeply influenced, there is little intellectual life in Gujarat. The mercantile urban society is full of certainty, which is an arid environment for the intellect.

The condition is surprising given the stimulation—the conviction of a minister in the violence, the jailing of the state’s anti-terror chief for extortion, the ejection from Gujarat of its deputy home minister for criminal activity, the demonstrated incompetence of the state in prosecuting rioters.

But all this passes without comment and almost without mention.

The idea that their actions have resulted in the radicalisation of Muslims—that terror attacks on Hindus across India are committed in the name of vengeance for the actions of Gujaratis—has not occurred to them.

Gujarati newspapers are flat on the features side, and their opinion pages are conformist. Journalism here does not have as much of the liberalism inherent in English media (our English news channels may be unhinged and our newspapers second-rate, but they are liberal in orientation on social issues).

Gujarati vocabulary is socially conservative and the idea that ‘they started it’ is easily accepted. Collective punishment becomes acceptable in the circumstances.

Most Gujarati newspapers, and I have worked in two, are paid for electoral coverage. Most of them do not defy political parties. They do not dare to resist their readership, even if they could intellectually.

The newspapers that attempt debate, like my friend and former colleague Prakash N Shah’s journal Nirikshak, struggle to sell a few hundred copies.

It is a society that is comfortable with itself. A strong economy, a strong leader.

This time, moving on is difficult.

One evening Congressman Kadirbhai and I were talking about our city, how entrenched  Hindutva had become and how long he had
been out of power.

“Aakarbhai, amaro daon kyare aavse?” he asked (When will it be our turn to bat?).

Aakar Patel is a Bangalore-based writer and columnist