The Colonel Who Got Us Siachen 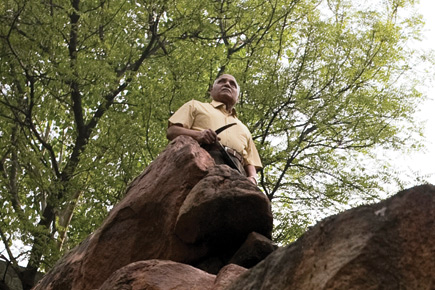 
After 35 years in Army uniform, Colonel Narinder ‘Bull’ Kumar is accustomed to abrupt orders. This highly-decorated officer of the Kumaon Regiment has planted the Indian flag on the Siachen Glacier in 1981, without conflict, without spilling any soldier’s blood on its ice and snow. Yet, last month, 26 years after retirement, when the phone rang at his Delhi home, he didn’t expect a military command: “Keep June 26, 2010 vacant. The Service Chiefs are free.” Though abrupt and absolute, the 77-year-old veteran would follow Army orders precisely. Just as he did as a cadet at the National Defence Academy in Dehradun, where he charged a six inch taller and tougher boxing opponent, SF Rodrigues (who’d become Chief of Army Staff), earning himself a nickname: Bull.

On the morning of 26 June, after combing his crescent of snowy-white hair, Colonel Kumar buttoned a white bandhgala and pinned on his array of awards, methodically moving left to right. The PVSM, a peacetime honour (accorded to generals, he’s the only colonel with this distinction in all three services), the Kirti Chakra for peacetime bravery, the Padmashri, a civilian award, and the AVSM for military service of an exceptional order. Next, a shining timeline, medals marking war-service and landmarks of Indian Independence. His ox-like chest glimmered with medals as he strode out of home with wife Mridula, son Akshay, an adventure travel professional, and daughter Shailaja, India’s first woman winter Olympian.

At 1100 hours, Colonel Kumar was to be felicitated with the MacGregor Medal, the highest honour awarded to an officer or soldier of the Indian Defence establishment for military reconnaissance. Introduced in 1888 by the council of the United Service Institute of India (USI), of 117 awards, 14 belong to Indians (the rest awarded to the British serving in India). Colonel Kumar joined the legendary ranks of Sir Captain Francis Young-husband, who explored the northern crown of Central Asia and India; Major General Wingate, who instituted new warfare standards in Burma; and Captain Badhwar, for his intelligence on ‘unconfirmed’ Ladakh areas and discovery of Rupkund Lake’s (now famous) remains. After Independence, as satellites took over risky reconnaissance done by valiant soldiers, the coveted medal was rarely awarded. The last MacGregor was conferred 13 years ago. “Somehow Colonel Kumar’s national security achievements went without recognition,” admits a USI MacGregor selector.

Chronicling this record amidst applauding officers, moist-eyed family and popping flashbulbs, India’s three Army chiefs inducted Colonel Kumar into MacGregor’s league of legendary soldiers. ‘Col Kumar gained highly valuable terrain and enemy information that safeguarded Siachen,’ says the citation. It salutes him equally as a soldier-mountaineer: the first to put India on Everest (1965), first to scale Nandadevi (1964), and first to climb Kanchenjunga from its toughest north-east face (1976), a feat described by The British Alpine Journal as ‘far more difficult than the Everest ascent’.

Colonel Kumar’s military facets came to the fore in 1978, when as commandant of The High Altitude Warfare School in Gulmarg, he saw a US map that placed Siachen in Pakistan. “I spotted that mistake in a second.” Countering this ‘cartographic aggression’ as a mountaineer, he led a reconnaissance expedition forward to this point ‘NJ 9842’. Colonel  Kumar returned with evidence of trespassers closing in on the roof of India: Pakistani cigarette packs, cans and climbing gear. By April 81, just as wild sia roses bloomed briefly, the Colonel became the first person to scale the uncharted Sia’chen—the world’s largest glacier—from its freezing snout to its icy source. In his salty style, Kumar says: “Once you get the heights, you’re the tiger. We put the tricolour at the farthest end of Siachen.”

India is still a tiger on this glacier that cleaves Pakistan-occupied-Kashmir and Chinese territory. After devastating territorial losses to China and Pakistan, “Colonel Kumar laid India’s claim to this land without armed conflict. Sadly, holding onto it is costing us dearly in terms of lives and disabilities,” says Major General Sudhir Vombatkere (retd), who built the highest-altitude motorable bridge on the logistic route to the glacier (a Guinness record). In 1984, Colonel Kumar’s reconnaissance formed the bedrock of Operation Meghdoot, when India thwarted Pakistan’s occupation of Siachen, the world’s highest battlefield. Lieutenant General VR Raghavan (retd), commanding officer of Operation Meghdoot, calls Colonel  Kumar ‘a mountain of information’.

Partition, service in the Kumaon Regiment where he first telescoped Nanda Devi, and a lifelong camaraderie with Tenzing Norgay, turned this boy from hilly Rawalpindi, Pakistan,  into India’s most decorated soldier-mountaineer. After losing toes on both feet to frost bite in 1961, he’s entered the oxygen-depleted death zone above 8,000 m, twenty times. Due to this disability, he’s signed non-liability forms before epic expeditions. “This meant if something happened to me, my wife’d get nothing.” Hospitalised for a year to stave off amputation of his legs, he finally sacrificed four toes and some grip and balance. When visitors sympathised with the ‘famous climber’, he’d heckle them: “Want to see my remaining toes? Pay 4 annas and I’ll poke them out from the sheets.”

His skirmishes with history began in 1947, when 13-year old Narinder represented Punjab state at a scouts jamboree in Paris. The team of 50 scouts was returning by ship, when news of Independence broke over them like a tsunami. “All of us, Muslims, Sikhs and Hindus, decided to design a flag,” he says. “We put the Union Jack in the Centre, India and Pakistan on either side.” They wanted to sing a national song, but which one? So in just-broken voices, “we sang… tera sahara.” One night, he thought a ship engine had failed. Next morning, he found all Muslims had been asked to disembark in Karachi. Narinder got off in alien Bombay and went to Shimla, where his parents had migrated.

This Rawalpindi family gave all its four sons to the Indian Army. Their youngest followed Colonel Kumar’s footprints in the snow, ascending Everest in 1985, before falling from 8,500 m. “The last time I went to Everest was to bring back my brother’s body,” says Kumar gravely. “My chacha’s death disturbed me,” says son Askhay. With Bull as adventure-mentor, Akshay runs Mercury Himalayan Explorations, one of the first rafting companies to navigate the Ganges and Brahmaputra.

The mountain bond was born when Colonel Kumar met Tenzing Norgay, director of the Himalayan Mountaineering Institute, in Darjeeling. They’d talk summits night and day. When Bull set his sights on Trishul, Norgay asked: “Bhaiyya, what about the money?” A plan was hatched. They’d offer a visiting New York Times reporter exclusive coverage in return for funds. The evening he was to arrive, they said: “Bhaiyya, too late for beer, too early for whisky, let’s serve champagne!” The bubbly paid off; NYT funded them with Rs 200,000.

That plan was scotched by seniors: “money from a foreigner, that too a correspondent?”  From the Kumaon Regiment, Colonel Kumar was given Rs 5,000. Norgay’s wife knitted him a pair of lhasa-apso gloves. Trishul was Bull’s debut climb; he’d ascend as Colonel 18 years later. This time, skiing down from 7,000 m to 4,500 m (a world record). “Such nice white slopes, no ice walls,” he recalls gleefully. The ascent took a week-and-a-half, the descent an hour-and-a-half!

Though Norgay was older, they’d call each other Bhaiyya for three decades. Norgay, “was like a mother, a porter and companion on the mountains” says Colonel Kumar. Hearing about Norgay’s death in 1986, he rushed for the funeral only to be stopped by a Gorkhaland bandh. “I hate politicians,” he says gruffly: “They wouldn’t allow Tenzing Norgay’s funeral? The Army helped.”

On life’s summit today, with the MacGregor in his grip, the Colonel wants Siachen to be a pinnacle of peace. “It kills me to think we are still fighting there.” Yet, at 4,880 m, Kumar Base, a key forward logistics post, still functions as a tribute to this soldier-mountaineer, who crossed seven mountain ranges—Pir Panjal, Himalayan, Zanskar, Ladakh, Saltoro, Karakoram and Agil—to give India Siachen. With blank maps and a meagre budget of Rs 50,000, he charted this glacial battlefield where choppers now drop supplies. Though the mountaineer in him wanted to capture K2 (in Pakistan), bringing more peaks into India, Colonel Kumar remained soldier first, and followed orders. Returning to base-camp with Siachen—“God’s own architecture”—mapped on India.