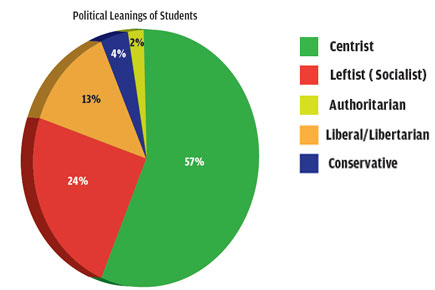 
Youngsters in Delhi lean away from extreme political viewpoints. While a quarter of them do lean towards the Left, most are centrist in their political outlook. Most students, surveyed at Delhi’s leading colleges this January end, want a balance of political and economic freedoms, where the Government plays facilitator rather than master.

These are some of the findings of the ‘Smallest Political Quiz of the World’, conducted by the Centre for Civil Society—a Delhi-based non-profit, research and education organisation.

The methodology of the quiz is simple. College students are asked to respond to a set of five questions on the role of the Government. The queries pertain to certain specific issues that have a bearing on their personal and economic freedom. 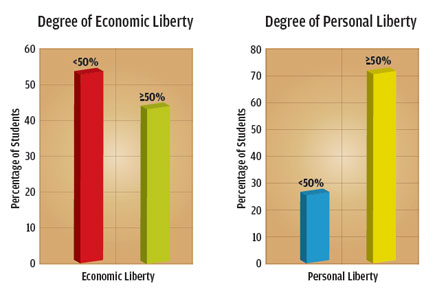 Roughly 75 per cent of the respondents were in favour of a very large measure of personal freedom—measured as a score of over 50 (see graph alongside).

On the other hand, only 43 per cent of students advocated substantial freedom from government interference in matters of the economy (a score of less than 50), as judged on the following counts: no government handouts for business; no intra- and inter-national trade barriers; replacement of government welfare with private charity; privatisation of public sector undertakings; end of the government’s ability to take away people’s property without their explicit consent. There were three objective responses to pick from: ‘Disagree’, ‘Maybe’ and ‘Agree’. The quiz was administered to 322 students of nine leading colleges of Delhi. Their responses determined where they stood on the political matrix drawn on two factors: political and economic freedom.

There are five broad types of political leanings that students are found espousing, depending on their responses.

1. Respondents seeking an overdose of both personal and economic freedom can be called libertarians or liberals.

2. Those seeking moderate personal freedom with a lot of economic freedom can be called rightwingers or conservatives.

3. Those looking for a lot of personal freedom, devoid of economic freedom, would be labelled socialists.

4. Those desirous of moderate personal and economic freedom would be centrists, the biggest political segment.

5. Lastly, and thankfully the least, those who want little personal and economic freedom can be called authoritarians.