Why leave out Chidambaram’s initial advice to the PM in favour of a spectrum auction and his ministry’s shift in stance five months later? 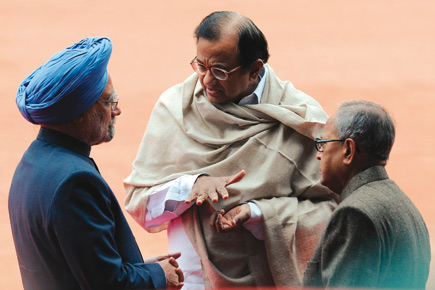 Why leave out Chidambaram’s initial advice to the PM in favour of a spectrum auction and his ministry’s shift in stance five months later?


The chargesheet of the Central Bureau of Investigation (CBI) on the 2G scam arouses curiosity. While it squarely names former Telecom Minister A Raja as the mastermind, and three companies and eight individuals as co-conspirators, it has been conspicuously silent on a key and unexplained set of developments within the Union Cabinet. Developments that saw the then Finance Minister P Chidambaram change his mind and concur with his DMK colleague that auctions need not be held to determine prices for 2G spectrum in 2008.

On 15 January 2008, Chidambaram had written a strong note to the Prime Minister advising auctions and informing him in detail of the issues at stake. His subsequent change of stance is what has allowed Prime Minister Manmohan Singh to mount his own defence on the ground that he was only okaying a formula agreed upon by his Cabinet ministers. Surprisingly, Chidambaram’s initial letter is not even mentioned in an otherwise comprehensive CBI chargesheet.

This CBI omission assumes significance since it was this concurrence between the finance and telecom ministers that was cited by the PM at the beginning of the Budget session of Parliament this year to assert that he had valid reason for not intervening in Raja’s allocation of 2G spectrum in 2008 at 2001 prices—the formula the CBI holds responsible for causing a huge revenue loss to the exchequer. “The Government’s policy on the pricing of spectrum was made on the basis of a Cabinet decision of 2003, which specifically left this issue to be determined by the Ministry of Finance and of Telecommunications,” the PM told the Rajya Sabha on 24 February this year, “…the record clearly shows that the then Finance Minister, while he initially had a different view, which he communicated to me on 15 January, subsequently consulted the Minister, Telecommunications, and the two ministers worked out an agreed formula on spectrum charges, which was reported to me in a meeting on 4 July 2008.”

Not only is the CBI chargesheet mum on Chidambaram’s 15 January note to the PM, it also overlooks the ‘agreed formula’ conveyed to Dr Singh on 4 July 2008. The two are crucial, as they explain not just the ‘different view’ of the Finance Mini-stry, but also the latter’s change in thinking that apparently allowed the PM to rest assured on his government’s allocation policy, clearing the way for Raja to spin out the country’s biggest ever scam.

So, what was the ‘different view’ that Chidambaram communicated to the PM merely five days after the dubious Letters of Intent (LOIs) were issued to spectrum applicants and much before the actual allocations?

In the abovementioned note (a copy of which is with Open), the Finance Ministry spoke emphatically against giving away 2G spectrum on a first-come-first-served basis. Says the note: ‘Spectrum is a scarce resource. The price for spectrum should be based on its scarcity value and efficiency of usage. The most transparent method of allocating spectrum would be through an auction. [This] method… will face the least legal challenges. If the Government is able to provide sufficient information on availability of spectrum, that would minimise the risks and consequently fetch better prices at the auction. The design of the auction should include a reserve price.’ This is the only part of the note that has been typed in bold letters, implying special emphasis. The three-page note of 15 January also suggests a way to carry out the auction: ‘The auction could be for a ‘one-time payment’ for additional spectrum or ‘an annual rent’ for additional spectrum. Once the price is discovered, additional spectrum should be allocated to all bidders at that price.’

Besides, the Finance Ministry was also categorical about the necessity of making it mandatory for a licensee to share the premium with the Government if spectrum is sold to a third party: ‘In addition, if a licensee sells his licence (including the spectrum) to another person, it could be stipulated that the licensee should share with the Government a part of the premium/profit gained by him through the sale.’

This is crucial in light of the CBI chargesheet’s observation of how Swan Telecom and Unitech Wireless—the two firms charged as scamsters—cheated the Centre by first obtaining unified access licences at throwaway prices, and then offloading part of their firms’ equity at huge premia. ‘Although the FDI limit was increased from 49 to 74% in December, 2005, there was no lock-in period or restriction imposed on sale of equity or issuance of additional equity. As a result of this, M/s Swan Telecom Pvt Ltd, which paid DoT [Department of Telecomm-unication] Rs 1,537 crore for UAS licences of 13 circles, offloaded its 45% equity to M/s Etisalat of UAE for Rs 4,200 crore,” the chargesheet notes. ‘Similarly, M/s Unitech Wireless, which paid DoT Rs 1,658 crore for UAS licenses of all 22 circles, offloaded its 60% equity to M/s Telenor of Norway for Rs 6,100 crore. These stakes were sold by the said companies even before the roll out of services by them.’

It remains a matter of debate whether the PM, after having been alerted thus, could have stepped in to stop the scam. And if five days after the LoIs were issued was just too late, the question that arises is why Chidambaram wrote this note after and not before the issuance, especially since the Cabinet decision of 2003 had specifically left spectrum pricing policy to the finance and telecom ministries.

The third question is this: why did Chidambaram change his position on spectrum pricing five months after his note? Admittedly, spectrum auctions have been dogged by the ‘winner’s curse’ of unviable bids in almost every telecom market worldwide (even India had to move to a revenue-sharing formula), but this was not new knowledge, nor was this the stated reasoning. The big question is of timing. Why and how did viewpoints converge against auctions in July to Raja’s advantage?

In his Rajya Sabha speech on 24 February, the PM sought to answer the last set of questions: “…this decision (of concurrence) that was put to me (on 4 July 2008) by the two ministers was in line with recommendations of the TRAI [Telecom Regulatory Authority of India] in its report of August 2007. In that report, TRAI had clearly stated that only 3G spectrum should be auctioned, and the policy for 2G spectrum should continue on the same basis as hitherto. This recommendation… was based on the need to ensure a level playing field between new entrants and incumbents. The two minis­tries had agreed on this, because of legacy considerations, and I accepted their recommendation.”

This explanation of Dr Singh, however, has been debunked by the CBI’s chargesheet, which lays out how Raja and his co-conspirators manipulated all rules as well as TRAI recommendations to ensure ‘better prospects for his favoured companies’. TRAI did not suggest that spectrum be sold in 2008 at 2001 prices, and it is hard to believe that the Government was unaware of this fact.

This shifts the focus once again to the CBI, which has been criticised in the past for playing to the gallery and operating at the behest of its political masters. Skipping these important questions in its voluminous chargesheet is not all that lends credence to such criticism. The manner in which its chargesheet has gone out of its way to treat Raja’s as an isolated case while insulating almost all other ministries from criminal charges, particu­larly giving the PM a clean chit, remains as mysterious as the 2G scam itself.

In the PM’s case, the chargesheet la­bours to establish how Raja misled him on 2G spectrum allocation. Describing the three letters exchanged between Raja and Dr Singh on 2 November 2007, the CBI says, ‘In furtherance of the conspira­cy, accused A Raja, later on the same day, i.e. 2 November 2007 itself, wrote a letter to the PM misrepresenting the facts and fraudulently justifying his decision regarding the cutoff date of 25 September 2007 on the ground that on this date, an announcement of the cutoff date ap­peared in newspapers. He also misled the PM and incorrectly stated the opinion of the Ministry of Law and Justice [referring] the matter to the eGoM [Empowered Group of Ministers] to be out of context.’ The chargesheet then goes on to state how Raja was already in a criminal conspiracy with Sanjay Chandra of Unitech, and with Shahid Balwa and Vinod Goenka of Swan Telecom, before the cutoff date’s publica­tion in newspapers.

The CBI also refers to the PM’s letter to Raja the same day saying that ‘since spectrum is very limited even in the next several years, all the licences may never be able to get spectrum’, to show that Dr Singh had cautioned Raja but the minister just brushed aside his advice. Interestingly, the CBI concludes that ‘adherence to these directions would have foiled (Raja’s) designs to unduly favour applicant companies he was in a conspira­cy with’. One cannot miss the implica­tions of this CBI comment, since the Government’s PR machinery has claimed that the PM had merely forwarded sugges­tions received by several companies and stakeholders to Raja. The CBI clearly does not think so, insisting that the PM’s missives were ‘directions’. Implicit in this finding is the CBI’s belief that had the PM’s directions been enforced, the 2G scam could have been prevented.

The CBI highlights that Raja wrote the second letter the same day, in collabora­tion with his private secretary RK Chandolia, without either referring it to the DoT or dealing with it in the official files, yet assuring the PM ‘…there was and is no single deviation or departure in the rules and procedures’.

What is surprising in all this is that the PM blindly believed whatever Raja in­formed him through his two letters the same day, and did not sense anything amiss even after the Finance Ministry sent its note of 15 January 2008. And five months later, he promptly blessed the ‘agreed formula’ the moment the Finance Minister made his U-turn on spectrum allocation policy.

If the PM had acted on Chidambaram’s note before the actual allocations, given its criticality in the context of Raja’s determination to bend all norms for his favoured companies, the country may have been spared the trauma of this scam. Perhaps the Joint Parliamentary Committee (JPC) will look into this.