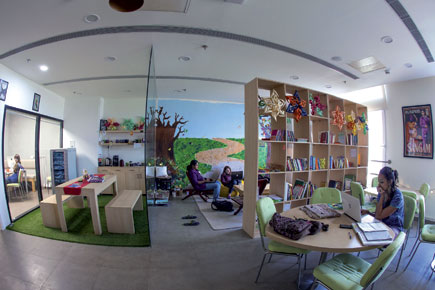 Veleen Sadana is a PhD student at the Department of Sociology at Delhi University. Her area of interest is urban sociology, specifically how transport shapes the expansion of cities. A committed researcher, Sadana is thoughtful and soft-spoken, and conscious of keeping her language free of jargon while explaining her subject of research. As a researcher, a usual work day for her extends over ten to twelve hours. In another life, as an engineer and former infotech professional, she used to work long days. But, she says, “I used to feel strained and unhappy at that time. And, though I have the same working hours now, I don’t feel them.” Sadana grew up in Jalandhar, and when it was time to choose a career path, she ended up follow- ing the herd to an engineering college. “In that city, at that time, there was no awareness of other options. An engineering degree was what everyone aspired to.”

After working in a multinational tech firm for a few years, unhappy, dissatisfied and unable to explain why, she resigned her job without telling her parents, and enrolled in a journalism course. It was the first time she encountered terms like ‘subaltern’ and ‘political ideology’. She decided to learn more, and applied for a Masters degree in sociology. “When you train in a professional course like engineering, you are a different person. You’re not exposed to ideas, so you find yourself following stereotypes, say of gender or caste. Study- ing humanities has made me a different person. It has taught me to not be biased, to have a reasonable understanding of things.”

The essence of Sadana’s story is all too common. As many young people in India would attest, choosing humanities for higher education is looked down upon. “Humanities and social sciences are for dumb students, those who are rejected from other fields. That is the common perception,” says an irate political science student of Jawaharlal Nehru University in Delhi, “God forbid if you do manage to make an individual choice for yourself, there will be uncles and aunties who will convince your parents that you will never find a secure job or earn well, or even have a legitimate career. It is as if you cannot contribute to society by studying humanities.”

Shernaz Cama, an academic at Delhi University, recounts some of the struggles that students have faced. “There is so much pressure on students who score well and opt for humanities. Part of our job as teachers of humanities is to counsel worried parents, assuring them that their children will do well even if they do not choose conventional jobs, to explain that we need thinkers in our society, not just engineers.” According to Cama, the fallout of this is a brain drain in humanities that few talk about: “Research in the humanities is not given any importance or funding. Our best minds leave the country. While those from technology and business come back, the ones from humanities rarely do.”

In 2010, Martha Nussbaum, American philosopher and academic heavyweight, wrote a fervent plea for the future of humanities in America and the world in a book titled Not for Profit: Why Democracy Needs the Humanities. What should be alarming for India, and it is typical that not many are alarmed, is that she chose the Indian model of higher education to highlight the worry. To scare American educationists, she picked on India’s abysmal record with humanities. The Indian model of ‘an education for profit-making’ leaves no room for ‘an education for a more inclusive type of citizenship’. In India, and increasingly in the US, she finds an emphasis being placed on the skills required by a modern democracy to support ‘a strong economy and a flourishing business culture’ but at the expense of humanistic education to ‘promote a climate of responsible and watchful stewardship and a culture of creative innovation’. Her argument, in a nutshell, is that the humanities have the power to save us and our future.

The frenzy for pre-professional training for the IITs and IIMs gets special attention from Nussbaum, as she reflects on a culture where success is measured on the basis of pay packages of students, the highest ones glorified in newspaper reports. The culture of schooling is shaped by this competitiveness, as parents discourage children from acquiring an education in fields that are assumed to be superfluous—like philosophy, history, literature, dancing and painting.

In a country like India where forces of change are battling forces of conservatism, where freedom of speech is constantly impinged upon and a culture of banning anything that is deemed offensive is pervasive, it is imperative that higher education does not just produce graduates for the marketplace, but a citizenry that can engage in creative and critical thinking and come up with fresh ideas through the study of liberal arts.

Sanjay Srivastava, head of Sociology at the Institute of Economic Growth, New Delhi, says that humanities and social sciences are in a state of crisis at most government and state-run universities. “We have some good departments, but the vast majority are very bad. I edit a sociology journal and most submissions we get are of very poor quality. You can see it in the quality of commentary in our country, which is ill-informed and illiberal on various issues like communalism, gender and sexuality. We just haven’t taken to social sciences as a way of viewing the world which equips us with questioning, instead of just a vocation.”

India wasn’t always so indifferent towards the humanities and the social sciences. Liberal arts education in India was once hallowed ground. Nalanda, founded in the early fifth century, the oldest university in the world, where students came from China, Tibet, Korea and Japan, had subjects as diverse as public health, medicine, astronomy, sculpture and architecture, along with religion, history, law and linguistics, mathematics and logic. As Nobel laureate Amartya Sen has written on the traditions of teaching at Nalanda, ‘The faculty and the students in Nalanda loved to argue, and very often held argumentative encounters. It is a part of the scientific tradition to seek arguments and defenses, refusing to accept positions and claims on grounds of faith. There were plenty of organized argumentative matches going on in Nalanda.’

Nalanda was re-established last year with international cooperation, beginning with two schools, that of Historical Studies and of Environment and Ecological Studies. Aditya Malik, dean at the former, says that the highly qualified faculty is trying to achieve something new. “Our frameworks of thinking about our culture are derived from the European context,” he says, “We are trying to develop other frameworks. Our emphasis is on Asia, to coincide with the shift happening globally, looking at Asia as a location of thought.” The new departments to be set up will be in Economics, Public Health and Philosophy and Comparative Religion.

The revival of Nalanda is a long-haul project. But there is a larger churn under- way to reclaim lost ground in humanities elsewhere in the country. It is a space that is being filled by private universities. “Private universities are playing an extra- ordinary role in plugging the gap that has been created in social sciences,” says Deepak Mehta, head of the Department of Sociology at Shiv Nadar University, which has an inventive School of Humanities and Social Sciences. “Over the last decade, there has been a growing sense of the crisis in humanities in India. We need to address this malaise,” he says, “Social sciences are extremely relevant in our environment. Look at the Land Acquisition Bill, for example, which is currently in the news. The social sciences help us think about the underpinnings of such issues. How does land transmute into property? What is the place of law in this? What is land holding and fragmentation?” The wheel is finally turning, he feels, as Indians are thinking about these things differently.

Among the institutions that are leading the new liberal arts charge is Ashoka University, which set up campus in Sonepat in Haryana and promises an Ivy League quality education. It started last year with an undergraduate batch of about 140 students for a four-year programme. Jonathan Gil Harris, professor of English and dean of academic affairs at Ashoka, makes an eloquent case for what the university hopes to achieve. “The legacy of the British colonial model has trained Indians to be docile engineers of the Raj. After that, there was hope that science and technology would help India catch up with the rest of the world. But, there is a long and rich tradition in India of the liberal arts. Look at Abul Fazl, the historian of Akbar… We can trace this all the way back to Ashoka himself. We are trying to reconnect with that tradition.”

For those who are more hard-nosed about such matters, he says that a liberal arts education reflects the realities of a changing world. “In a growing economy like India, the workplace requires multi- disciplinary skills, the ability to commu- nicate, to look at a problem critically and to work in a team. Indians have a tremendous amount of curiosity, but it is checked at the door when they go into institutions of higher learning.” Ashoka discourages rote learning. “We are not teaching for tests. There is much, much more writing, reading, interpretation and debate. So that ‘education’ reflects its Latin etymological roots—‘to lead out, to have a questioning mind’.”

Ashoka offers students the option to combine mathematics with music, or computer science with English literature. Megha Devraj, an undergrad student at Ashoka, has chosen to major in mathematics and minor in philosophy. “We are trained to think that all subjects are disconnected. But I have studied The Tempest and the Ramayana here, and philosophy, and I find that everything is connected. That mathematics and philosophy are related in some ways. It’s a different way of seeing the world.”

While full-fledged experiments like Ashoka are atypical, B-schools in the country are adding liberal arts to their curriculum. IIM-Indore has a five-year programme in which Shakespeare and philosophy are taught along with math and computer languages. It is the same at new corporate-backed universities like the OP Jindal Global University and BML Munjal University where humanities are woven in to produce well-rounded graduates. It may not be a perfect answer to the Indian imbalance, but it’s a start.