The Adrenalin of Adversity 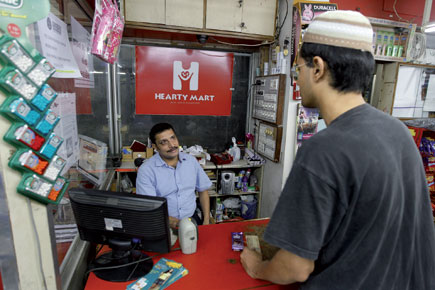 
Nadeem Jafri may be the most written-about person in all of Juhapura. He has appeared in Forbes, on CNBC and NDTV, and the story of how he set up the first supermarket in the largest Muslim locality of Gujarat is now a case study for MBA programmes in India and Europe. Recently, an international TV show wanted to profile him, but Jafri insists that I do not divulge the show’s name. “It’s quite big,” he says with a wide smile.

Jafri’s story has obvious appeal: he defied the odds by starting a business in Juhapura in 2004, just two years after the Gujarat riots, at a time when few wanted to enter this part of Ahmedabad, let alone set up shop.

But few of the articles on Jafri—either by design or by accident—mention the fear that led him to open his store or the obstacles he faced with suppliers refusing to come to the area. As a result, Jafri’s story on public record so far has missed not just critical details of his life but also the severity of the challenge he confronted and continues to. It took me two years of meetings and interviews with him to fill in the gaps.

When Jafri and I first met in 2011, he began to narrate his life like a series of PowerPoint slides he might use during one of the many MBA presentations he is asked to make each month. But as I grew more comfortable with him and shared my own story of witnessing the 2002 riots, he began to open up.

Nadeem Jafri was born 41 years ago in Dholka, Gujarat, to a Jafri Sayyid Shia family with Sufi traditions. After studying physics at St Xavier’s college in Ahmedabad, he acquired an MBA degree in Indore. Jafri had a passion for business, but had no idea what sector to focus on. He worked for a travel agency, a vacuum company, and eventually settled on the field of advertising. At the time of the Gujarat riots, Jafri was 31 years old and working with the advertising agency Grey Worldwide.

Riots, he tells me, have never been unfamiliar to him. “I have seen riots since ages [ago]. Riots are not new to me. In 1992, I was riding on my bike from St Xavier’s when I saw flames and smoke near Law Garden (a neighbourhood in western Ahmedabad). I realised it must be riots, so I accelerated and went back to my locality. And everything was fine.”

But the mob violence of 2002 left Jafri with an altogether different sense of vulnerability. “In those riots, for the first time we felt that within our houses we were not safe. In our own bedrooms we were not safe… It was very bad.”

On 27 February, the first day of violence, Jafri gathered his wife, mother and two sons together. Their safety was top priority. “I am just grateful that my kids were too young to remember. It was very scary.” Many of Jafri’s Hindu friends and colleagues offered his family shelter, but Jafri declined; he had heard reports of Hindus being attacked for taking Muslims in, and he did not want to put his friends at risk. “I thought that if I go, it would not be good for the people who are staying there.”

Jafri’s boss at Grey, a Hindu, let him take leave liberally. “It was a relief because we had that fear of leaving home,” says Jafri, “You can say we had that fear all the way till maybe May 2002.”

Rumours of a Hindu boycott of Muslim businesses started to circulate, and Jafri learnt that almost 90 per cent of businesses owned by members of his Chiliya community had been burnt down. The scale of the devastation shook him.

It was during those long days of trauma that Jafri started thinking of creating a source of income that would, above all, be safe. And it was a visit a few months later to a Big Bazaar outlet in Mumbai that gave him his first glimmer of an idea. He liked his shopping experience there: everything was bright, he had plenty of choice, and the store somehow made him “feel good”. He decided he wanted to try this in Ahmedabad. But he knew if he had to do it, it’d have to be in Juhapura. As a resident of Paldi, Jafri knew very little about that part of town. Paldi is at the centre of Ahmedabad and does not suffer the absence of civic amenities that Juhapura does—be it a lack of schools and roads, or nearly non-existent public spaces and sanitation facilities. Moreover, while Paldi was a mixed locality that well-off Muslim families often aspired to move to (though ‘mixed’ only to the extent of having rows of Muslim homes sandwiched by Hindu ones), Juhapura was almost entirely Muslim. But Juhapura’s potential as a retail market was on an upswing. It was expanding rapidly as large numbers of Muslims had started shifting in after the riots. “It was a virgin area,” Jafri says. “[Other retailers were] running away from the area, so I thought I would have the first mover’s advantage. You can say without riots, there’d be no Hearty Mart.”

It was not easy. Amul Dairy refused to supply his store with its products. Jafri outlines the reasons: “Partly it was because they were not supplying other stores in Juhapura and it did not make sense from a cost perspective to come to just my store. Partly it’s because I was only 33 years old when I started the business and I was not tried and tested. But I suppose the biggest reason [was] the negative perception of Juhapura.”

Some suppliers bluntly told Jafri that they were afraid to come to the area. He tried to assure them that his store was actually on the edge of Juhapura, next to Vishala Circle, home to the city’s famous Vishala restaurant that has hosted the likes of Chief Minister Narendra Modi and the Indian national cricket team. Sometimes, Jafri would even tell suppliers that his outlet was actually in Vishala, not Juhapura. It did not work.

So Jafri called his friend Anil Singh, a former MBA classmate of his who worked as a general sales manager for Amul Dairy. “I told [the decision-makers] it made no sense,” Singh says, “…‘You have a customer who is willing to pay cash for your products; why not accept his money?’”

Singh seems a little hesitant to discuss what he gathered of Amul’s reasons for refusing to service Jafri’s store: “I did not go into it with them. Maybe it was for political reasons. Maybe they were not comfortable with the area… but either way, I told them the decision had no logic.”

When Jafri first arrived in Juhapura to scout for locations, “there was visible gloom in the air.” He opened his store in 2004 on an initial investment of Rs 65 lakh, pooled from investors of the Chiliya community, and decided to paint the shop’s walls, its signboard, its office and its steps bright red. “I wanted something bright—to bring colour to this area, to make people feel positive about the area. I also liked red—it is like a red- carpet welcome.” The result is a store that looks as if it is in perpetual preparation for Valentine’s Day.

Apart from delivery services, Jafri introduced a few charity initiatives as well. “What struck me about the store was that it did not feel like a business,” says Singh, who visited shortly after it opened. “It felt as if it grew organically from the community, like a neigh- bourhood place where you feel good about shopping.”

The turning point, Jafri says, was when people who had taken refuge in Juhapura realised they would not return to their previous homes and had to shop right there. Today, Jafri’s retail chain has 12 outlets, and his business model offers Hearty Mart franchises for others to open stores under the banner in rural Gujarat. Each year, his Juhapura store alone grosses Rs 1.5 crore in sales, but Jafri cautions me about buying claims that he has struck it rich. “I do not make much,” he says. “But I am very happy. I feel like I have given [something] back to the community and changed [others’] perceptions of Juhapura a bit.”

This is what is most rewarding for Jafri—his store has helped other residents of Ahmedabad feel more comfortable visiting Juhapura and interacting with Muslims, something he saw sorely missing after the 2002 violence. Jafri is especially proud of the diversity of his customers today. “See that person over there. He is a Hindu customer,” Jafri says. “It’s a good sign. It makes me very happy.”

Jasmin Chauhan, A supplier of hair products, says he had never visited Juhapura before Jafri opened his store. “We never thought of Juhapura as having any demand for such products,” Chauhan says, who now supplies his wares to 40 stores in Juhapura, most of them small shops. “But now we see it as an important place to do business.”

Another supplier, Raju Solanki, says visiting the area was unheard of ten years ago. “Juhapura had a bad name then and no one wanted to come. We were afraid and we did not know about the attitude of its people,” Solanki says, holding a laminated brochure of the potato chips he supplies. “Now we see that people are good and honest here.” Solanki credits Jafri for much of this perceptual shift: “Our perception was that it was difficult to do business in Juhapura, that we would be dealing with many small shops, but [Jafri] has made it easy.”

Rakesh Takore runs a company that supplies readymade food items like idli and uttapam. “Because of caste issues and Hindu-Muslim issues, no one wanted to cross the divide. You can say there was that fear. But today, there is peace and people in Juhapura feel safe. The attitudes of people have changed and we feel good about coming to this area. Some of my best business is in this area, actually.”

Jafri’s store is part of a larger effort of Juhapura’s residents to assert their presence in Gujarat. Outside Jafri’s store is an orange, white and green sign in Gujarati script that reads, ‘Saare Jahaan se Achha, Hindustan Hamara. Juhapura—Aap nu hardik swagat kare chhe’ (India is the best country of all—Juhapura welcomes you graciously). Elsewhere in Ahmedabad the sign would seem odd, but in Juhapura it echoes the message that Jafri hopes to convey through Hearty Mart: ‘We are Indian too.’