His life’s been such an unredeemed saga of misery that Baichulal Harijan has often wished himself dead. He believes Rahul might be able to turn it around for him. 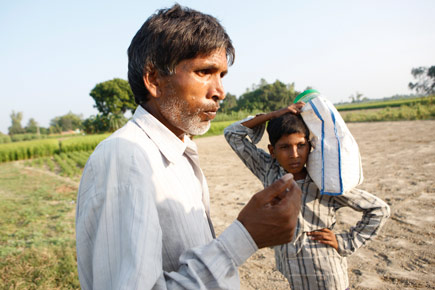 Life’s been such an unredeemed saga of misery that Baichulal Harijan has often wished himself dead. For him, Rahul is a harbinger of hope.


Life’s been such an unredeemed saga of misery that Baichulal Harijan has often wished himself dead. For him, Rahul is a harbinger of hope.

Baichulal Harijan’s life is a Greek tragedy. A landless labourer from Pratapganj in the Barabanki district of Uttar Pradesh (UP), he has secretly wished many times for an early death. But, like luck, the eventuality has evaded him so far. In a wall collapse last year, his mother and one of his sons died. His father struggled with tuberculosis for 14 years before calling it a day a few years ago. A few months ago, a trolley Baichulal was travelling in plunged into a river, killing dozens of people. But he survived. A day before he spoke to Open, on the outskirts of his village, he was bitten by a snake.

His life, he says, is worse than his forefathers’. “At least they were skilled workers,” he says, looking much older than his 35 years, “Look at me, I have no land, and so am forced to beg for some work in others’ fields.” But some hope has recently managed to rub off on him. This hope, he says, has come in the form of Rahul Gandhi. “Woh bade neta hain (he is a big leader),” Baichulal says. In the past, he says, he has voted for others. “Why don’t you tell them it was for Behenji?” his neighbour Prem Yadav prods him, referring to the Bahujan Samaj Party (BSP) leader Mayawati. Baichulal keeps silent for a moment. “Yes, we thought she was one of our own and would like us to progress. But no, nothing,” he almost whispers. “Nobody cares for us farmers,” Yadav says, forcing himself into the conversation. “We don’t even get fertilisers. Go to the supply depot, and it is always short. There is such a long queue; I have seen people fainting in the harsh sun,” he reports. “But I think Rahul Gandhi is a genuine leader. I will vote for him this time,” he says, as he pushes his oxen forward. “Me too,” Baichulal agrees. And then he holds his son’s hand. “If I meet him (Rahul), I will ask him to give us some arhar ki daal,” he says softly. “Arhar ki daal dekhe zamaana ho gaya (It’s been ages since I saw such pulses).”

About 500 km away from Baichulal Harijan’s sorrows, 39-year-old Piyush Khare is operating a learning module for his kids on his laptop in his plush Noida apartment, adjoining Delhi. A former merchant navy mariner, Khare has never voted so far. “Lethargy,” he says, “and also that no politician had been able to impress me so far.” This apathy has changed, of late. And this has happened because of Rahul Gandhi. “I think he is really serious about solving the problems of the common man,” Khare says. “And it is not just one time. I don’t think he is looking at short-term gains at all.” It also helped that a friend of Khare who is “rich and has properties as far as in London” got influenced by Rahul’s clarion call asking the young and technologically suave to join him in his mission.

So, the next time, when elections happen, at least two votes will be added to the Congress kitty from Noida: Piyush’s and that of his wife. “I want him to become a leader of national stature and not restrict himself to Uttar Pradesh,” says Khare.

Far from Noida, in Akbarpur Lok Sabha constituency, also in UP, which incidentally sends more MPs to Parliament than any other, there is at least one more man who is as enthusiastic about Rahul Gandhi as Khare. Shivendra Sharma, 25, is manager of the only authorised Hero Honda showroom in this rural Kanpur town. “See, it works for us like this: here, we don’t even get to see an MLA, and now suddenly Rahul Gandhi is everywhere. This time my vote will go to him,” he says.

“Also, I see Rajiv Gandhi in him.”