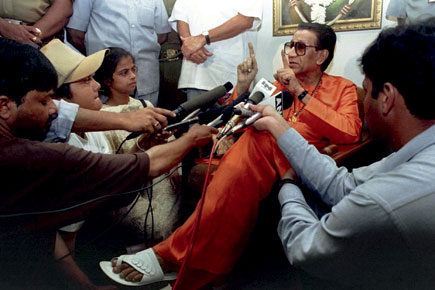 
Nearly a decade ago, Shiv Sena Chief Bal Thackeray had contemplated giving up politics and living a life away from the limelight. He had talked of a quieter life, reading, sketching and spending time with his grandchildren. He had wanted to reconnect with ‘old’ friends and go about life in a more relaxed manner.

In short, a man who could paralyse a bustling megapolis like Mumbai by merely lifting a finger, was talking of taking sanyas from a field that had seen him play the eternal warrior, ever ready to direct the frustrations of his Marathi-speaking followers at ‘the other’ (South Indians in the mid-1960s, Muslims and other minorities later). Like every other utterance of his, his yearning for a quiet life too had generated much talk. Those within and without the saffron party had much to say about what this meant. For, it was difficult to imagine Bal Thackeray, a man who had spent over 50 years of his life in agitational politics, retiring from the arena and slinking away quietly.

A decade ago, retirement had certainly been a prospect for Thackeray. Cut to 2012. The man who had wanted to withdraw from the daily grind of a party he had built, continues to be at its helm. Within weeks of his retirement talk, he returned and pretended that he had never said anything of the sort. Mere speculation of his exit had led to such unrest within the party that it looked as if it would fall apart, with many a Sainik looking out for other political options.

Thackeray knows it. He cannot retire. It will spell doom for his party. But given the falling fortunes of the Shiv Sena and its widening disconnect with its voter base, both urban and rural, the party might well be on its way to oblivion with or without Balasaheb’s leadership. In elections to local municipal councils held in December last year, the Shiv Sena ranked a poor fourth. Of the 4,245 seats overall that went to the polls across Maharashtra, the party was able to win only 363. Its alliance partner, the Bharatiya Janata Party (BJP), did not fare well either, winning only 385 seats.

Ironically, these local elections were held when the Anna Hazare-led movement against corruption—and the UPA—was on an upswing, and the Sena was sure of an anti-Congress/NCP wave in Maharashtra, where the coalition has held state-level power for over a decade. As results of the local elections came in, a shocked Sena leadership found that Anna’s popularity made no difference to its own electoral performance. Even the BJP had won more seats.

If political analysts have their bearings correct, then this trend could continue in elections to municipal corporations and zila parishads slated in Maharashtra next month. Thackeray, though, still seems angry over the earlier poll results. So much so that observers wonder if he has realised the threat staring his party in the face: the Sena, which has run the Brihanmumbai Municipal Corporation (annual budget: Rs 26,000 crore) for 17 long years, could be in for sharp losses this February.

ALLIANCES TO THE FORE

As BMC elections approach, there is more bad news for the Sena. With a seat-sharing deal between the Congress and NCP already sealed, the saffron party will have to rework its campaign plans. In previous BMC polls (in 2002 and 2007), the bickering Congress and NCP fought the elections separately, losing crucial seats to the saffron alliance.

This time round, Maharashtra Chief Minister Prithviraj Chavan of the Congress and his deputy Ajit Pawar of the NCP have learnt the lesson and worked hard to forge an alliance. Though the senior state leadership of the Congress had advised the party against such an alliance, since it felt the NCP stood to gain more from it, the High Command weighed in in its favour (naysayers, say sources, were kept out of the deliberations). Defeating the Shiv Sena-BJP alliance in the BMC polls is top priority, clearly.

The gap is not vast. The Congress has 70 seats in the outgoing house, while the Sena has only ten more. Sensing a need to erect defences, Shiv Sena’s executive president (and Bal Thackeray’s son) Uddhav Thackeray is trying a new tack: garnering as many Dalit votes as possible. To that end, he has struck a deal with the Republican Party of India (Ramdas Athavale group). This ‘Shiv Sena-Bhim Shakti’ alliance, he hopes, will fend off the threat. But Uddhav’s move has not gone down too well with the Dalit faction within the Sena, as these leaders were eyeing the seats that will now be contested by RPI candidates. The BJP wanted some of these seats too.

Bal Thackeray, say party insiders, was not in favour of the Sena’s RPI tie-up, given his none-too-hidden bias against Dalits in general and suspicions of Athavale’s agenda in particular. “Athavale is not a man Balasaheb trusts,” says a senior Sena leader, “He feels that Athavale is an opportunist who will go with anyone who gives him a bigger share. There is no ideology, where Athavale is concerned.” The RPI leader was once closely associated with NCP leader Sharad Pawar, with whom he fell out over seat-sharing arrangements.

Not that the Sena’s tie-up with the BJP, with which it claims an ideological affinity, has been free of friction. After BJP leader Pramod Mahajan died, Nitin Gadkari, current BJP chief and a Maharashtrian himself, seems to have adopted an old RSS attitude towards the Sena—that it is a local streetfighter that should leave saffron strategy to the BJP, the superior partner. Both the Sena and BJP have been threatening to desert each other, each believing it can outdo the other, but they see the need to keep the saffron vote united.

That’s the least they need. What they see up for grabs is the Dalit vote. With other RPI splinter factions—headed by Prakash Ambedkar, Jogendra Kawade and others—set to lean the Congress-NCP way, Uddhav knows he has to make his grand alliance work. The Congress-NCP combine, he senses, will pull out all plugs to defeat the Shiv Sena.

Since the birth of the Shiv Sena in the mid-1960s, its singular focal point has been the ‘rights’ of the sons-of-the-soil, the so-called Marathi Manoos. While South Indians and later Muslims have borne the brunt of the party’s street violence, north Indian migrants have also come under its attack, of late. Scenes of helpless Hindi-speaking taxi drivers and Railway Board exam candidates left bloody-nosed by Sena goons remain etched in Mumbai’s consciousness.

The Sena’s violence and shrill smear campaigns against these groups has created a large constituency of non-Marathi Manoos voters who see the defeat of the saffron combine as a matter of self-preservation. They are keen to evict the party from the BMC, which exerts considerable control over Mumbai’s public spaces. The better Mumbai that the Sena promises, they know, is one where they are consigned to the margins.

These voters have always been anti-Sena. What is different this time round is the delimitation exercise undertaken by the Election Commission, the outcome of which has been a shock to the Sena. Most of the 227 BMC wards have seen an increase in north Indian residents. Meanwhile, as Hindi speakers migrate

to Mumbai, Marathi speakers appear to be leaving it. Chawl upon chawl of Manoos residents has been replaced by a skyscraper full of richer, non-Marathi-speaking people. Many of these builders, ironically, are either close friends of the Thackerays or members of the Sena, like former Lok Sabha Speaker Manohar Joshi. The city’s Marathi population as a proportion of the total has seen a steady decline; last counted, it was down to 27 per cent. As a core constituency of voters, this is hardly enough to sustain a political party.

The Sena’s survival depends on whether it can think beyond the Marathi Manoos. Wooing Dalits is a start. But it may not be enough.

Another crucial factor is the split in the Shiv Sena that occurred when Uddhav’s cousin Raj Thackeray broke away to form his Maharashtra Navnirman Sena (MNS). The Sena sees it as a pretender, and pretends that it will not count at the hustings. The truth is that it has won large numbers of Sena supporters over, and since the warring cousins are unlikely to patch up, their face-off could lead to an existential crisis for both. After all, there can be only one inheritor of Bal Thackeray’s legacy.

To claim that mantle, Raj’s one-point agenda is to outdo the Shiv Sena headed by his cousin; the MNS plans to contest all BMC seats. Bal Thackeray, in a bid to prevent a split in Manoos votes, recently lambasted his once favourite nephew through the party mouthpiece, Saamna. Yet, in the personality clash between Uddhav and Raj, it is the latter who has emerged victorious so far, and is increasingly seen as the custodian of the Sena chief’s brand of politics.

It doesn’t help the Sena that Bal Thackeray’s poor health keeps him off the campaign trail. Dispirited Sainiks, who see Uddhav as an unworthy stand-in for his father, have been shifting to the MNS en masse. There are also whispers of grumpy Sena leaders conspiring to let the MNS steal ahead. Uddhav has got wind of this, say sources, but is helpless without his father’s guile in managing the party.

Other trends are going against the Sena too. Globalisation, for example, which has had its own impact on the typical Marathi family’s outlook. “Vada paav is no longer the only option for us,” is how Dilip Bhimrao Satpute, a 60-year-old Sainik, figuratively puts it. Look around. Traditional thalis at small-time eateries are giving way to burgers and fries at McDonald’s or fried chicken at KFC. Big-format stores are replacing kirana shops. And media exposure is changing attitudes. The Mumbai of the Sena’s vision, however, seems distinctly old-world.

“My family has voted for the party in all elections. Now our dreams have changed. Our children have dreams beyond what is on offer by the Shiv Sena,” explains Satpute, “Balasaheb wants us to safeguard Indian values while his own children do the opposite. We have realised that a global vision is better than a narrow one.”

For the Sena, a BMC loss would be disastrous. Cash, for one, would stop flowing into its coffers. And Mumbai is all it has, despite its recent rural inroads into Maharashtra’s hinterland. Geographical expansion would take too much effort, it seems; both Thackeray and Uddhav prefer to operate from the comfort of their sprawling bungalow in Bandra, and neither seems cut out for rural campaigns.

Could the upcoming BMC polls, then, signal the end of a phenomenon that has rallied and riled Mumbai for five decades? Could this really be the raging Thackeray clan’s final whimper?

The party’s founder is rarely seen in public anymore. And Uddhav, for all his efforts to cut a dashing figure with his Rahul Gandhi-style white kurta and sneakers, knows that time is fast running out for the Shiv Sena. Fifty years is an eternity in politics. But politics is politics, an arena that offers no certainties whatsoever. Even eternities can end.