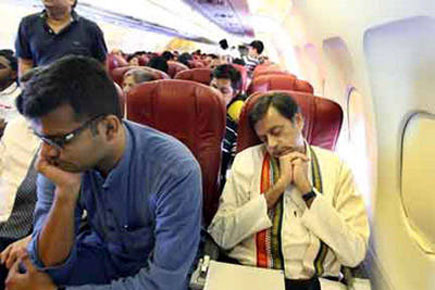 
It’s official. There will be no sarkari meetings in five star hotels, and our government officials, except those in the ‘apex scale’, have to fly economy class as India seeks to cut down on expenditure in the face of an economic slowdown.

While economists debate how to control the fiscal deficit, the central government last week also announced, as part of a slew of austerity measures, that it will not be creating new posts.

One can only applaud such efforts. After all, austerity at a time of an economic squeeze is the correct thing to do. And surely a country like India, which is still trying to feed, clothe and house a vast majority of its people, should cut out excess in this economic climate.

But just before the 17 September austerity firman, the central government did something quite bizarre. It announced on 2 September that IAS (Indian Administrative Service), IPS (Indian Police Service) and Indian Forest Service officials and their families could go abroad for treatment.

An attendant can also fly with the patient provided an official committee has granted approval. And it does not stretch belief to imagine that permission would be granted in most cases.

So, in the first week of September we think nothing of sending our bureaucrats and their families abroad, attendants in tow, for medical treatment. And in the third week of the month we decide to flirt with austerity. I am not privy to anything that is not in the public domain, but I can imagine the spirited interventions from the IAS, arguing that that if Foreign Service officers can get treatment abroad, why not them? After all, it’s all about equality.

The austerity argument falls flat when you posit it against the decision to allow India’s top babus to travel abroad for treatment. Will this not cost the government, even forgetting for the moment the dire state of the rupee?

Besides, the decision to finance their treatment abroad is tantamount to a vote against our own medical system at a time when hospitals across the country are trying to bring in more patients from abroad. By allowing treatment abroad for complex cardio-vascular problems, for instance, the government has negated the growing strength of India’s own super-speciality cardiac care hospitals.

Where the health of India’s top babus is concerned, you cannot trust Indian hospitals… is that the message the government wants to send?

While reporting for The Hindu newspaper from Islamabad in the late 1990s, I came across this odd instance involving a junior functionary in the Indian High Commission.

The gentlemen and his wife were having problems having children, so they opted for fertility treatment in Islamabad. It worked and they were blessed with triplets. All of this was paid for by the Government of India. The cost of treatment ran into lakhs even then.

I was (and am) happy for the couple but the question is why should the Indian taxpayer pay for fertility treatment abroad when the country’s professed goal is to keep population numbers low? The gentleman in question was simply claiming an entitlement. But should the State have provided the facility in the first place? I would argue not.

Indian officialdom’s appetite for freebies—free houses, free telephone, free treatment, free cars—is insatiable. Don’t be surprised if the facility is extended to pensioners in the ‘apex scale’. The babu who decides knows he will retire one day.

(Amit Baruah is an independent, Delhi-based journalist. His Twitter handle is @abaruah64).