Angry comrades, embittered by the violence wraught by industrial displacement, will now vote against communist parties 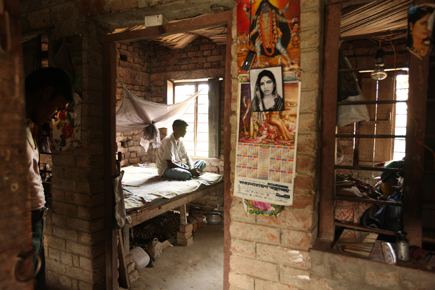 
Sukumar Jana, 42, like most others in the Sonachura area of Nandigram, had been a staunch supporter of the Communist Party of India-Marxist (CPM) for much of his life. That changed in December 2006 when the West Bengal government attempted to take over farmland for setting up a chemical hub. After his 35-year-old wife Supriya fell to police bullets on 14 March 2007, he cannot even bring himself to utter the Marxist party’s name.

Since then, he has taken part in rallies and other protests organised by the Trinamool Congress. He has voted for the party in the Panchayat polls held last year, and the Assembly bypolls held earlier this year. But not with his heart. “It was impossible to accept that the party I had worked for so selflessly, one which stood for the rights and interests of poor people like me, would act in league with big capitalists to take over our land. I made many sacrifices for the CPM on the personal and family front. I still find it hard to accept that my own comrades, along with the police, fired at and killed my wife,” says Sukumar, who’s left with the responsibility of bringing up his teenaged son, Soumyakanti, who has just appeared for his school board exams.

Sukumar is grateful to Mamata Banerjee’s party for taking up his cause: “The Trinamool Congress had come and stood beside us and saved us from losing our land, and perhaps even our lives, from the Left Front government.” The sentiment has translated into support for the Trinamool in the Panchayat and Assembly, as is likely to be the case in the Lok Sabha as well (Nandigram is part of the Tamluk constituency). “But it’s difficult, if not impossible, to change one’s ideology overnight. You see, I’m a Leftist at heart. The party [CPM] let us down badly, but not the ideology. That the CPM and Left Front in Bengal have strayed from communist ideology is not the fault of the ideology, but leaders of the party,” explains Sukumar, who’s a college graduate and used to run a tutorial for high school students along with his wife.

This is the dilemma that many former supporters, activists and workers of the CPM face. But, “abstaining from voting is not an option”, says Sukumar’s farmer friend Dhananjoy, 52, “Forget about winning, even if the CPM gets a respectable vote share here, the consequences will be horrific. They’ll unleash another reign of terror.” Dhananjoy, who lost his 32-year-old son Bharat during the violence unleashed by CPM cadres on 7 January 2007, and his 22-year-old nephew Pushpendu to police bullets on 14 March that year, was also a card-carrying member of the CPM.

That card was consigned to flames at the pyre of his son. “But is it easy to change one’s ideology? We support the Trinamool today because for us in Nandigram it is now the party that protects the interests of the poor. The Trinamool may be a socialist party, but isn’t communist. The CPM no longer follows communism, it is totally capitalist,” says Dhanonjoy. He has been campaigning for Subhendu Adhikary, the Trinamool candidate here for the Lok Sabha. “But I’ve grown a bit wary of the political system. My faith and belief in it were shattered once,” he confesses.

Hundreds in Sonachura feel quite the same way. Come election, they will all vote for Adhikary. Not only because they’re all indebted to this portly young man who stood by them during those hard times, but also because not doing so would mean, in Sukumar’s words, digging a canal to one’s own pond to let the crocodile in (“Khaal kete kumir daka” in Bangla).

Local Trinamool leader and Pradhan of the Sonachura Gram Panchayat, Nishikanta Mondal says he understands the people here. “It’s not a dilemma that one acts upon. It only plays in people’s minds,” he says. He is familiar with the CPM. Not only was he a member of the local and zonal committees of the Marxist party from 1978, he resigned from the party in 1990. “I was a wholehearted loyalist and led many agitations on behalf of the party. But then, I started seeing how many of my comrades started becoming corrupt. I became thoroughly disillusioned and left the CPM,” he says.

Mondal contested the Gram Panchayat election in 1993 and 1998 as an independent against CPM nominees and won. “But the party engineered my defeat by just four votes in 2003,” he says. His break with the party he had supported ever since his college days as a Students’ Federation of India (SFI) member was complete in December 2006 when the state government issued a notification to take over thousands of acres of fertile farmland. “The CPM-led Left Front government was promising jobs and a lot of cash compensation to the losers of land. I knew from past experience that these were just false promises. I knew very well how my party had cheated those who gave up their land for the (nearby) Haldia petrochemical complex.” All he needed was a platform to air his views. That’s what the Trinamool offered, a platform to speak from and act upon his grievances.

People are angry, he says, but that is precisely why they must vote. “It is very complicated. People may have lost faith in the political system and politicians, but that doesn’t mean they’ll abstain from voting. To do so would mean more danger. One never knows what’ll happen if they abstain from voting. Maybe the blood-thirsty CPM will be back. People can’t take a chance with that and will vote for the Trinamool,” he predicts.

Even though violence-riven Nandigram in West Bengal is a place where the electorate has grown extremely wary of the political system as a whole, people see courting the crocodile as the bigger danger. Reason enough.