Trouble brews for the Congress in the south 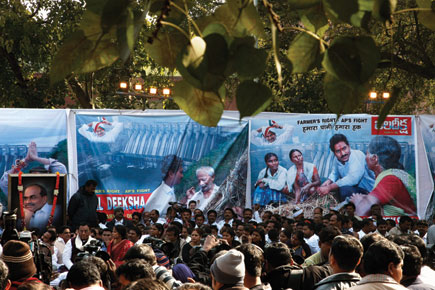 Trouble brews for the Congress in the south


BANGALORE/KOCHI ~ When Oommen Chandy was sworn in as Kerala’s new Chief Minister on Wednesday, it was the only silver lining in the south for the Congress which has been routed in Tamil Nadu, faces rebellion in Andhra Pradesh, while an overambitious governor spoils the party in Karnataka. To add insult to injury, a breakaway leader has been able to form a government on his own in Puducherry.

Though Chandy has been sworn in along with six ministers from important allies, the troubles have only begun for the Congress in Kerala. Its management skills will be put to severe test in the coming week as 13 more cabinet berths are up for grabs, and each partner is certain to demand its pound of flesh in full glare of the media. Chandy, who does not like high decibel levels, will have to do a trapeze act to keep his allies satisfied.

That’s the price the Congress has to pay as it enjoys a mere four-seat advantage over the Left Democratic Front which mounted a late challenge and split the verdict in this Assembly poll.

In Tamil Nadu, by continuing its alliance with the tainted DMK, the Congress has been completely decimated, thanks to two warring factions led by Union ministers P Chidambaram and GK Vasan. Their super-sized egos failed to read the writing on the wall despite warnings from the cadres. Even the Youth Congress, which contested elections for ten seats, failed to win a single one. The party’s immediate response to its rout has been to get on the phone to congratulate the winner, the AIADMK’s J Jayalalithaa, an act not taken to very kindly by the DMK. Party president Sonia Gandhi will have to do more than just accept state Congress president KV Thangkabalu’s resignation, taking moral responsibility for the loss. She will have to step in and overhaul the state leadership completely, as the party has managed to win just five seats.

In Karnataka, Sonia does not have to do much as her confidant, Governor Hans Raj Bhardwaj, has been putting the BJP government on the mat frequently for some reason or the other. Indeed, Bhardwaj’s only agenda seems to be to somehow put the power-hungry Congress back in power after a six year hiatus.

In this week’s crisis, the Governor has recommended Chief Minister BS Yeddyurappa’s dismissal after the Supreme Court termed the speaker’s action suspending 16 rebels from taking part in the trust vote last October unconstitutional. Bhardwaj’s opinion that the government was an illegal one has prompted the BJP to parade its MLAs, including 10 of the 16 rebels, before the President. The last word on the drama is not out yet but the Governor’s single-point agenda has led the BJP to ask for his recall. It is important for the Congress, which incidentally lost two more of its MLAs to the BJP—three poached MLAs (the other from the JDS) won the bypolls last week—to put its house in order and stop dreaming of a mid-term poll, which in any case may swing the BJP’s way on sympathy alone. It should also find a way to make Bhardwaj stop acting like the party’s agent.

In Andhra Pradesh, battling a post YSR thrombosis, the party has let his son  Jaganmohan Reddy run riot. This culminated in Jagan’s stellar performance in the Kadapa bypoll last week on the newly-formed party, YSR Congress, that he floated. His mother, too, retained her MLA seat.

Earlier, Jagan’s antics coupled with the sustained pro-Telangana agitation had put the Congress government on the edge several times after YSR’s death in a helicopter crash in September 2009. This led to the Congress looking for a younger leader in place of K Rosaiah who succeeded YSR. Kiran Kumar Reddy, the new incumbent has to now deal with a resurgent Jagan out to wrest his family silver (he thinks he has every right to succeed his father as CM) even as a long line of ministers, MLAs and MLCs queued up before AP affairs in-charge Ghulam Nabi Azad to complain about his style of functioning. The Kiran Reddy government is already in the ICU, getting a daily fix of oxygen from the High Command. The party, which promised a separate Telangana state and has done nothing so far to move towards it, has also to contend with Osmania University students who will be back on campus, the hub of the pro-Telangana agitation, after the summer vacation.

In Hyderabad, one of the jokes making the rounds is that KKR, as the CM is called, should be in the playing eleven. It refers to the CM’s younger days when he was the eternal 12th man in the Hyderabad Ranji cricket squad. He just can’t afford to run the government from that position.

All in all, quite an unenviable position for the Congress to be in the south despite winning Kerala. As one analyst says: “The Left will give the new UDF government enough time before it moves in for the kill. A slender lead between the two formations is, after all, a first in the history of the Kerala house. With the Left probably keen on going in for a vote on every other issue, members would find it difficult to even go out of the Assembly and pee.