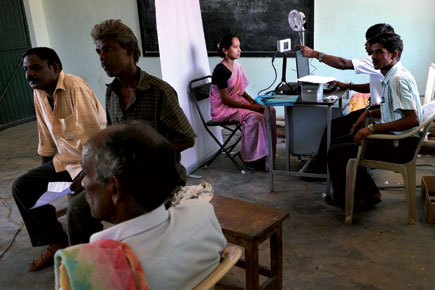 
In early 2009, a mobile service provider ran a funny ad with an unforgettable tagline. A village sarpanch deals with communal tension by decreeing that all residents identify themselves with mobile numbers instead of names. ‘What an Idea!’

The underlying concept was borrowed from reality. In February 2009, the UPA Government established an agency, the Unique Identification Authority of India (UIDAI), to actually do this on a grandiose scale.

Under an initiative branded Aadhaar, every Indian would receive a unique identification (UID), a 12-digit number. This UID would be stored in an electronic database along with their biometric information (fingerprints and iris scans). Once the UID was issued, regardless of where somebody went and what they did, they could be tracked and identified. They could also, of course, identify themselves by using this UID. Multiple applications and services could utilise the UID by linking it to more information.

The chairman of the new UIDAI was Infosys co-founder and tech-maven, Nandan Nilekani. Nilekani had already mooted the idea of a UID in his book, Imagining India, arguing it could enable technological solutions for many of India’s deficiencies as a welfare state.

NREGA was Congress President Sonia Gandhi’s brainchild. Sonia firmly believed, and still does, that NREGA created a rural vote bank, which helped the UPA return to power in mid-2009. But holes and leakages became obvious as NREGA scaled up.

A lot of the money meant for the rural unemployed ended up with the people dispensing it. Ghost identities entered the system. It was tough to identify people who genuinely needed help and they lacked access to the financial system, which made it difficult to help them.

Every welfare scheme the Indian government has ever tried has run into versions of these problems. The people at the bottom of the pyramid lack formal identifiers the state demands as proof of existence. They are homeless and migratory and hence, lack proof of residence. They don’t possess school certificates. They were not born in hospitals and rarely die there. Their births and deaths are unregistered.

There are systems through which such non-persons can ‘acquire’ an identity—court affidavits and certificates by local politicians, for instance. These are cumbersome and at the same time easily rigged by anybody who wishes to set up fake IDs. The PDS system, for instance, is infested with ghosts who draw rations and buy subsidised kerosene. Pensioners die and their deaths go unregistered, allowing pensions to be drawn ad infinitum, and so on.

A biometric system could, in theory, solve many issues. If the technology works, duplication of identity should be impossible. An individual could walk up to a scanner and identify himself or herself without paperwork, and receive whatever goods or services s/he is entitled to.

UID is, therefore, a great ghost-buster. But while it can prove or verify the existence of Ms X, it doesn’t directly ascertain if Ms X is below the poverty line. You have to build applications that run on top of UID to do that.

As Sonia Gandhi sees it, MNREGA won the last election. And Aadhaar, which will help make MNREGA more efficient and optimise other subsidies and entitlements doled out by the state, could win the next election. On the economic side of things, UID could cut subsidy bills, while at the same time enabling delivery of better services and wider coverage.

A UID should help eliminate leakages in the welfare and entitlement system. The National Institute of Public Finance and Policy (NIPFP) did a study that suggested the UID project could eventually provide a massive 52.85 per cent internal rate of return (IRR). This may be over-optimistic. The study seems to cherry-pick data. But as Aadhaar scales up, it should indeed eliminate leakages and help increase coverage of services to those who need them. The extent to which savings will accrue is unclear as is the eventual cost of a fullscale UID rollout.

UID enables direct cash transfers (DCT). The implications of this are huge. Instead of setting up dual pricing systems to subsidise food, fuel and fertilisers leading to inefficiencies, leaks and black markets, people below a certain income level can be given DCT. You and I will continue to buy our food and fuel at market rates with our own money. The lower-income family can buy food and fuel at the same rates, using the money received via DCT. The farmer can buy fertiliser with DCT, instead of the current complex system of subsidy. This should all be a win-win situation.

But nothing in India is ever that simple, of course. The 51 pilot projects rolling out in January will highlight possible issues in implementation on the ground. For one thing, biometrics technology does have failure rates, including both false positives and false negatives. Even a small failure rate is significant when you are dealing with a population of 1.2 billion.

Second, while the RBI has cleared UID as sufficient documentation for basic banking services, the rural hinterland lacks bank branch networks. So, in practice, the DCT will be doled out in many places through a network of banking correspondents—for example, kirana store owners using handheld scanners.

There is plenty of scope for slips between cup and lip in this system. A lot of DCT recipients don’t possess the skills to monitor the bank accounts that will be set up for them. One of the suggested solutions is to send DCT information directly to the recipients’ mobile phones. Again, mobile penetration is spotty in the under-developed areas where DCT is most required. There are also potential behavioural issues, where families may misuse cash. We won’t really know until the system starts rolling how serious these roadblocks will be.

The Government is launching DCT in relatively easy areas such as scholarships and pensions, where, in fact, it already transfers cash. As and when it moves into big-ticket subsidies like PDS and fertilisers, it will also run into entrenched vested interests. In short, the ‘leakages’ that DCT could potentially eliminate enrich government servants who stand to lose large portions of their income if the current systems are junked. It remains to be seen how much sand these people can throw into the gears of the UID.

At the same time, if UID cannot enable DCT to deal with PDS, fuel and fertilisers, the lofty internal rates of return the NIPFP projects for UID will remain pipe-dreams. There are other issues as well with dismantling or reformatting the PDS system. The Government buys food for PDS supplies at a minimum support price (MSP). The agriculture sector and lots of votes revolve around the complicated, leaky processes of MSP.

If DCT is implemented, the MSP system becomes redundant. Is it dismantled? What does the Food Corporation of India do with the millions of tonnes of grain rotting in its godowns? How are farmers compensated during the transition? Difficult questions and the possible answers are all politically explosive.

There is, and has been, entrenched opposition to UID from other quarters as well as from within the UPA itself. It was opposed for several years by the Home Ministry (which runs the Census of India). This ministry wants to set up a parallel database—the National Population Register (NPR). However, the NPR cannot use biometrics.

The opposition within the UPA was more obvious while Pranab Mukherjee ran the Finance Ministry (which oversees the UIDAI, which is an arm of the Planning Commission) and P Chidambaram the Home Ministry. A compromise has now been worked out where the NPR and UIDAI will run enrolments simultaneously. This seems like a huge duplication of effort.

Another problem is the lack of legal clarity. The National Identification Authority of India (NIAI) Bill has been pending for a while. It is possible that it will not be passed before the next general elections, which makes it more difficult to deal with issues arising from it.

Is UID mandatory? Apparently not. And, of course, it covers only about a sixth of the population at this instant. But in practice, anybody who doesn’t have a UID could eventually be excluded from basic services. The Delhi government has already said that UID will be made mandatory for a range of services including marriage registration, property registration, property tax certificates and so on, and possibly for all public services from 2014. Other states are likely to follow suit.

There are also plenty of long-term worries about where the UID system could lead if it works and scales up as envisaged. First, there is a moral hazard facing any government looking to dole out cash for votes. If you can, at the click of a mouse, dole out more cash, and you think it will win more votes, will there be a tendency for subsidies to expand and thus for deficits to rise? If you pump cash into an economy, rather than supplying goods, will it stoke inflation? Colour me cynical but I suspect that both these things could happen.

The final set of problems is something most Indians will currently gloss over as an abstraction and an “elitist concern”. It only affects the 150 million or so at the top of the pyramid at the moment. Most of them have little understanding of where it could lead.

This is about privacy and its intimate connections with both crime and political freedom. UID will be linked to all sorts of other databases. Potentially, using it as a tag, a data-miner could know a shocking amount about your life. If there are multiple databases that are linked through UID with detailed personal information, data-security becomes a huge issue.

At one level, this is about crime. How secure can such a set of linked systems ever be, especially in a shambolic place like India? When some database gets hacked (not if, when), what sort of remedy does the legal system offer victims?

The other issue is about political freedom. Broad details of your income tax payments, your Facebook friends, your frequent caller list, your investments and consumption habits is the least of what could be obtained if all data online about you is linked through a tag like the UID.

Do you trust a political establishment that sends girls to jail for an FB ‘like’ to have access to this sort of detailed information? As of now, this is an abstraction. But, ironically, it will become more relevant as UID becomes more efficient. As always, technology remains neutral but the uses to which it could be put may either be very benign or extremely malign.