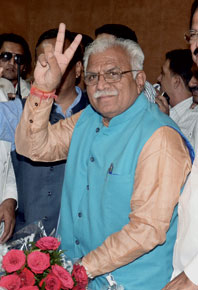 If Prime Minister Narendra Modi were to visit his home state Gujarat from Delhi by road, he would not have to pass through any state where his Bharatiya Janata Party is not in power. Haryana, the first state border he would have to cross, is now under BJP rule for the first time ever. And that too, without an alliance partner.

Part of the credit for that achievement belongs to BJP President Amit Shah, whose decision to go solo in the Haryana Assembly polls was seen as an act of bravado by some observers just a few weeks ago. Going into the fray, the party had only four of the Assembly’s 90 seats, won back in 2009. Now it has 47, despite having dropped its General Election ally, the Haryana Janhit Congress (HJC), and the credit for that goes to Modi’s message, which rang out loud and clear across the state. Taking charge of the campaign, the Prime Minister promised serious work over sycophancy, good governance over corruption, and development over lethargy. Implementing all that is now the task of Manohar Lal Khattar, Haryana’s first BJP Chief Minister.

It wasn’t long ago that the BJP’s alliance with the HJC looked firm. Earlier this year, the two fought the Lok Sabha election together, and the BJP won seven of the eight seats it contested. It got a vote share of almost 35 per cent in Haryana at the time. More importantly, it had a lead in 52 Assembly segments. In a state where the party did not even have block offices, let alone a cadre base, this performance was a stunner. For Shah, it spelt conviction that BJP could win on its own.

The alliance may have stayed intact had the HJC President Kuldeep Bishnoi accepted the BJP’s demand of 45 seats—to contest—in seat-sharing talks. But Bishnoi tried to drive a hard bargain that has left it nowhere. The HJC has been reduced to two seats. In contrast, the BJP not only won a majority, there are six seats where its candidate lost by less than 2,500 votes. “We won more seats than we were asking our earlier coalition partner to leave for us,” said a triumphant Amit Shah after the victory.

The BJP has been able to capitalise on caste equations while making inroads into other parties’ vote banks. It helped vastly that the Modi hurricane that swept Haryana during the Lok Sabha polls still had force enough to upset the old political equations in the state and knock established parties down.

The BJP campaign was multi-layered, and it was backed by a strategy to attract voters of all caste and other groups. However, the tipping point was its consolidation of non-Jat votes. In a state that has seen its politics dominated by Jats ever since its inception, with only occasional swings to non-Jat leadership, this was remarkable in itself. Jats comprise 25 per cent of Haryana’s electorate and have always occupied a prominent place in the state’s power structure. Notably, Chief Minister Khattar, an RSS pracharak, is a non-Jat leader.

The 75 per cent non-Jat vote is a mix of 24 per cent OBCs, 30 per cent ‘upper- castes’ and 21 per cent Dalits. The state’s non-Jat votes used to be divided among different parties. Typically, ‘upper caste’ voters would prefer the Congress, while some would vote BJP; the state’s OBCs would often vote against Jats; and Dalits would switch between the Congress and INLD. For this election, the BJP created a social coalition of almost all non-Jat groups.

For the first time, the Dera Sacha Sauda, a religious organisation with strong influence over Dalits, issued a call in support of the BJP. This went against both the Congress and Bahujan Samaj Party. In the Yadav-dominated south Haryana region of Ahirwal, the BJP won 15 of its 24 seats. In fact, the party did well in all regions except the heavily Jat-populated western part of the state, where the INLD and Congress retained their sway. Even there, however, the BJP created a flutter in other camps by fielding 27 Jat candidates, higher than any other party in the state. Overall, the gameplan worked, with the BJP estimated to have got over one-fifth of Jat votes.

Regardless of caste factors, another important segment that sided with the BJP was Haryana’s youth, especially in urban belts. By one survey, the party was the first choice among 30 per cent of young voters. They were impressed by Modi’s pitch focusing on vocational skills. The youth played a crucial role in improving the victory margins in rural areas as well. As many as 24 of its 47 seats were won with a margin of over 20,000 votes, and all these constituencies have sizeable youth populations.

That the BJP had won urban favour was evident during the Lok Sabha election as well. This trend continues, as seen in its performance in the urban areas of Haryana. Of the 11 urban seats, the BJP won 10, including Rohtak, the erstwhile Hooda bastion of the Congress. In most urban centres, the BJP got over half the total vote. “The BJP was the preferred choice of urban and educated voters in Haryana,” says Sanjay Kumar, director, Centre for the Study of Developing Society (CSDS).

The BJP victory in Haryana marks a new beginning for the state in several ways. The days of dynastic politics now seem numbered, with the Jat clans down and out and the Congress having lost power after two terms.

Take first the Grand Old Party. This was one of its worst performances in the state; anti-incumbency sentiments against Bhupinder Singh Hooda’s government ran strong. In his 10 years of power, Hooda focused all development efforts on his own Rohtak-Jhajjar-Sonepat region, where the Congress has not done too badly, winning 10 of its 14 seats (with BJP getting the rest). Everywhere else, the Congress was battered. It was not even in contest in most of the constituencies and stood third with a final party tally of 15 seats, even less than the INLD’s 19.

The Congress should have expected it. In many places, people reported satisfaction with the infrastructure work done by Hooda, but various land scams and alleged favours doled out to the well- connected played on their minds. The infighting within the Congress party also played havoc with its election pitch. The election was left entirely to Hooda and his team, as no other state leader participated in the campaign. Senior state leader Kumari Selja had upped the ante against Hooda just after the Lok Sabha debacle; she wanted a leadership change in the state, but the Congress High Command stuck with Hooda. The party’s state president Ashok Tanwar at one point even offered to resign over ticket distribution. Many other senior leaders, such as Chaudhary Birender Singh, left the party to join the BJP, an exodus that weakened its vote catching ability.

The reluctance of the Congress central leadership to campaign in the state stood in sharp contrast with Modi’s rallies in Haryana. Modi addressed as many as 11 gatherings, while Congress president Sonia Gandhi and vice-president Rahul Gandhi attended just seven. Modi spoke for at least 45 minutes everywhere, while the top two Congress leaders concluded in a matter of 15 to 20 minutes.

Marred by corruption charges, the Congress campaign had little to offer by way of defence. Neither Hooda nor the central leaders took on the issue. At the end, say analysts, it has exposed the mai baap manner in which the Congress operates. “It is imperative to listen to leaders from the state. If you ignore them and try to rule from Delhi, the message is clear,” says a senior state leader. Party workers’ confidence in the leadership was almost nil, and this might trouble the Congress in time to come. As a distant third, it has plenty of thinking to do.

The election results also cast a shadow on the future of Haryana’s regional parties that have had dynastic leadership for a long while. The INLD of former Chief Minister Om Prakash Chautala—himself the son of former Chief Minister Devi Lal—fared worse than it did in 2009, when its tally was 32 seats. “It is definitely a surprise for us, but we respect the people’s mandate,” says senior party leader Abhay Chautala.

The party had tried to recreate the appeal of the erstwhile Janata Dal with leaders such as Nitish Kumar, Sharad Yadav and HD Deve Gowda campaigning for it, but it fell flat. The INLD has a strong base among Jat voters and the party was able to retain its hold of the state’s Jind- Sirsa region. Elsewhere, it was hit badly by a division in Jat votes. While the INLD may seek solace in having kept its vote share more or less intact, the defeat of its young leader Dushyant Chautala to the BJP’s Prem Lata, Jat leader Birender Choudhary’s wife, says a lot about the party’s decline. In election rallies, Modi kept up an attack on OP Chautala for trying to take oath as Chief Minister from jail, where a corruption case has landed him.

Kuldeep Bishnoi, son of former Chief Minister Bhajan Lal and president of HJC, fared far worse. Whatever success Bishnoi has had so far has been on account of non-Jat support. But this time, that support was squarely in the BJP’s corner. He was able to win his own family seat in Adampur, and his wife won Hansi, but that’s all the party managed: like the BSP, just a couple of seats.

Apart from ‘Modi magic’, another interesting factor might have worked in the BJP’s favour: historically, Haryana has always voted for the party that is in power at Centre. And the BJP it was.

‘Voted for a hope in the dark’ said a tweet on 15 October, election day. The tweeter spoke for many.