Each time Yasin Malik makes a public appearance in Delhi, he finds himself shouted down by a group of angry protestors. Here’s who they are. 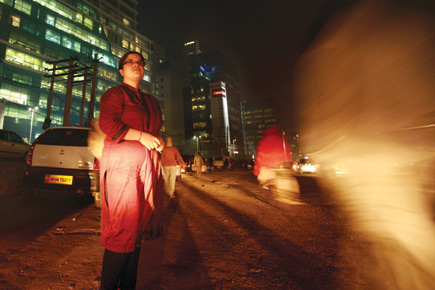 Each time Yasin Malik makes a public appearance in Delhi, he finds himself shouted down by a group of angry protestors. Here’s who they are.


Each time Yasin Malik makes a public appearance in Delhi, he finds himself shouted down by a group of angry protestors. Here’s who they are.

This was the fourth time they had crashed his party. By now, the JKLF leader perhaps expected to see them every time he visited New Delhi. So, at a recent high profile India-Pakistan Peace Conference, the session on the issue of autonomy for Kashmir and Baluchistan that had Yasin Malik as a speaker, was bound to see some drama.

Sure enough, trouble started as soon as Rajinder Sachar, former Chief Justice of the Delhi High Court, finished his speech and invited Yasin Malik of the Jammu & Kashmir Liberation Front (JKLF) to speak. A voice from the audience objected to Yasin Malik’s right to speak at the conference. Soon, there were 20 odd people, members of a group that goes by the name Roots in Kashmir, on their feet shouting and waving photographs of the separatist leader with the word ‘murderer’ scrawled across.

“I won’t wait for a court trial. Hang me here if you can prove that I have raped and killed. Tell me when it happened. Give me the date,” responded the man accused. But the disruption was threatening to spin out of control. The police was called in and the protesters were shown out. Two of them were briefly detained. Meanwhile, the few protestors who’d been allowed to stay in the hall were handed the microphone to register their protest. This man, they said, was the face of the insurgency in the Valley that led to the exodus of Kashmiri Pandits in the early 1990s, and had no business airing his views at a peace conference. Yasin Malik, to them, was no hero.

So, who are these serial agitators who routinely show up at various places in Delhi to heckle the one-time poster boy of Kashmiri separatism who famously give up the gun in 1994?

This is where it gets interesting.

There’s a research scientist who works for a leading pharmaceuticals company, a 16-year-old student off to Yale University later this year, a doctor, a vice-president of a multinational bank—they’re all part of the protest brigade. They are young, successful and ambitious. And they are angry as hell.
Amit Raina, 35, vice-president of an MNC, is a picture of calm as he drinks his cappuccino at a coffee shop. “You should see me at the protests. I was the first guy to pick up the fight with Yasin Malik when he was invited to speak at Teen Murti Bhavan. There is a lot of anger inside,” says Raina, who recalls how a 14-day winter vacation with two friends to Delhi in 1990 turned out to be a 14-year-long wait. “We had to flee Srinagar,” recounts Raina, “Sixteen members of my family travelled from Srinagar to Delhi in one car. We came with nothing.”

Raina says he feels a moral obligation to do something for his community of Kashmiri Pandit exiles. Does he worry that getting on the wrong side of the law could affect his professional life? “It does worry me sometimes. But when you believe in something, there will be sacrifices. I’ve been arrested once. If you shy away, it means you have no belief, no faith.”

Neither does Manish Mattoo, 32, an anaesthesiologist who also has an MBA degree, show any hesitation in disrupting public gatherings. “The ethos of Kashmir and what we’ve lost is ingrained in me. I am Manish Mattoo, the Kashmiri who lost his homeland, first, and then a doctor. If anything, I think we are not shouting out enough. I feel no awkwardness,” says Mattoo who is a senior operations manager at a leading healthcare chain.
Mattoo and his family left Srinagar on 21 December 1989. He was 12. His uncle had been shot dead by insurgents. His father had been sent death threats. To him, Malik symbolises everything that went wrong with Kashmir: “Every time he comes in front of us, there is an outburst of anger and emotion. He is like a catalyst. We don’t have to prepare for it. When we look at him, anger is spontaneous.”

Neeru Kaul, 28, would agree. The bespectacled research scientist didn’t think twice before walking up to Yasin Malik at the 2008 India Today Conclave and confronting him with a barrage of questions. “I could have spoken to him in Kashmiri, but I made it a point to speak to him in English. I wanted the person who was standing next to him to listen to what I had to say.” As it turned out, that person was Shekhar Kapur, on whom Neeru’s eight-minute tirade made quite an impression; the well-known film director even blogged about it.

After noting Yasin Malik’s ‘completely impassioned and moving speech’ on the state of youth in Kashmir, Shekhar Kapur wrote, ‘As he left, a young girl came to me brimming with anger… The young girl was as moving as Yasin as she held back her tears, angry that Yasin was allowed this platform without the audience being told of the atrocities that he and his comrades perpetuated on Kashmiri Pandits. I could totally see her point of view.’
Did Neeru feel better after her outburst? “No,” she solemnly replies, “it was not about that. It was a reaction. I felt insulted that day. Even today, if he is brought in front, I will feel the same rage. Until justice is done, how can there be peace?”

It is hard to miss the irony when Amit, Neeru and Manish express sentiments, offer words of logic or speak the language of injustice and alienation that so often forms the narrative of life for those on the other side of the communal divide. One has to wonder what drives even younger people like 16-year-old Radhika Koul or 21-year-old Aditya Raj Kaul, both of whom have no childhood memories of Kashmir, into such a frenzy when they see Yasin Malik’s face.

In fact, Aditya, who was instrumental in forming Roots in Kashmir, started it all when he gathered some 20 people to stage a ‘counter dharna’ to Yasin Malik’s at Jantar Mantar in 2007. The protestors took the separatist by surprise. “Our voice has been scuttled by these people, the government,” says the student of political science at Delhi University, “Even the media and the human rights groups have ignored us. If nobody was going to voice our plight, we decided to do it together. It was a big shock to Malik. We practically abused him in Kashmiri. That day the media covered us.”

Radhika finds herself an outsider among other Kashmiri Pandits her own age who don’t quite share her obsession with her cultural and religious identity. “Most people of my generation feel completely disconnected from the Kashmiri cause. We were born after the displacement. Neither have we gone home, nor have we been able to learn our language properly. I’ve had to teach myself Kashmiri, my mother tongue, from websites and books. I feel very strongly about culture and politics.”

Radhika Koul is leaving for Yale University in the US this August. Her essay in the application form was one on Kashmir, titled ‘Land and Language’. She began the essay with a line from Gone with Wind , where Gerald O’ Hara tells his daughter Scarlett, ‘…Land is the only thing in the world worth workin’ for, worth fightin’ for, worth dyin’ for, because it’s the only thing that lasts.’ Heavy duty stuff.

Like many other Kashmiri Pandits in exile, Radhika is steeped in inherited memories of Kashmir, the language and history, its festivals and folklore. She cannot bring herself to hide her resentment or animosity: “Because of what I say, most of the people will call us communal. But what happened to us was extreme.”