Sangh in Its Soul 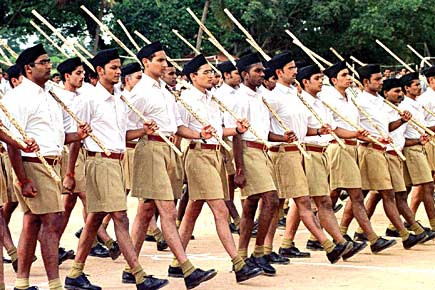 The gloves came off first, and then the mask. For an organisation that claims to be cultural, social and non-political in character, the Rashtriya Swayamsewak Sangh (RSS) leadership has spent a rather politically active fortnight, a part of it fixing things in New Delhi for its protégé, the Bharatiya Janata Party (BJP). In doing so, it not only made a rare public spectacle of the Sangh Parivar, to which both belong, it sent a clear signal about who is in charge.

The ongoing drama began with a TV interview by the RSS’s 59-year-old Sarsanghchalak Mohan Rao Bhagwat that served as a recorded message for the BJP just before it began its Chintan Baithak (introspection meet) at Shimla. Even before the meet could begin in earnest, the BJP ejected Jaswant Singh for his ‘pro-Jinnah book’. The severity of this act made it evident that the BJP was ready to go all out now to please its bosses in the RSS. The latter, on their part, made it clear that they would like to remote control the BJP all the way from its headquarters in Nagpur, even if it meant using the television to do so.

In his interview aired on 18 August, Bhagwat had spelt out BJP’s need for a young leadership. Soon, all hell broke loose within the party. The BJP’s top leader Lal Krishna Advani and President Rajnath Singh suddenly found themselves besieged with criticism. Utterances by RSS leaders are known to have effect, but this was highly dramatic even by the Sangh Parivar’s own standards. If the two leaders were to be pushed aside, party members sensed, there would be vacancies at the top. Ambitions had been stoked, and how.

MORE LOYAL THAN THOU

In the days since, the BJP has expended much energy to show that it has caught a cold because the RSS sneezed. The scurrying and scraping has been quite a sight for BJP watchers. But it is the party’s ideological mentor that has made the bigger move by far. Once and perhaps for all, it has shed its pretence of being a non-interfering, non-political entity in action. “The RSS doesn’t interfere in the BJP’s matters,” has been something of a stuck record, playing itself out from Nagpur with regimental regularity. Ever since it was founded in 1925, it has played only an indirect role in the Indian political arena. There was even a recent resolution adopted by the RSS—Chitrakoot 2005—that it would abstain from electoral politics. But that hasn’t stopped it from waving its big stick at the BJP, now that the party looks lost.

Never in the past has the organisation intervened so brazenly in BJP affairs. Its advice was always important, but during the Vajpayee years, there was little question of direct control being exercised in any way. In fact, it was quite the contrary, with RSS man KN Govindacharya being expelled from the party for daring to term Vajpayee a ‘mukhota’, a mask of moderation adopted only to cover a saffron agenda of governance.

But then, Vajpayee was sure of electoral support. The BJP without him is not, and the vacuum has given the RSS just the chance it needed to exert its authority and keep the party away from a Vajpayee or Jaswant Singh, or anyone else who would not stand to attention with a horizontal arm salute at the stroke of its command.

The RSS’s compulsions are more than historical. At the ground level, the RSS cadre and BJP party members often overlap, and many belong to both. When Open spoke to functionaries within the RSS at various levels of its hierarchy in Maharashtra, its grouse became clear. There is anger with the BJP leadership for “bringing a bad name to the Sangh Parivar” through displays of indiscipline and opportunistic mud-slinging.

In the RSS’s view, power brokers and party bureaucrats had displaced its cadres in the BJP, with the latter lacking any say in formulating party policies. Their neglect, say men in khaki shorts, resulted in such a loss of zeal down the ranks that they could no longer canvass with the conviction needed to win elections. They feel the blame lies with the BJP’s leaders whose zest for office had clouded their ideological mission. “With its stint in power at the Centre, the BJP has tasted blood,” says a senior RSS leader from Nagpur. “The BJP is getting desperate out of power. It will be a daunting task to satiate this desperation,” adds another.

The rescue of the party, as the RSS insists, must start with a re-regimentation of sorts. The key to compliance now is ‘discipline’. Consider the words of RSS ideologue MG Vaidya, “For the time being, you may sweep the dissidence under the carpet, but not for good. A bludgeon of disciplinary action may throttle the voice of dissent; but it will not create discipline.” It’s a broad term that includes desisting from remarks about the secularism of Jinnah. Ever since Advani’s 2005 praise for Pakistan’s Quaid-e-Azam, at his mausoleum, the RSS has seen the BJP as having gone astray.

For the record, at his first press conference in Delhi, Bhagwat repeated the line that the Sangh would not interfere in BJP affairs. But he did not forget to add this: “We want what is happening (in the BJP) to stop. But it is for them to do it.”

Bhagwat said it was too early to write off the BJP. “The election results have given them a jolt, but they should’ve recovered from it fast,” he said. “Whatever I wanted to say, I have said,” he added, referring to his 18 August TV interview, “Now, it is for them to act.” Asked about former minister Arun Shourie’s outburst against the party’s top brass, Bhagwat described him as a “respected intellectual” and left it at that. He also added that the Sangh would help the BJP if the party wanted it.

“Do”, “act” and “should”… quite a few in the BJP’s top leadership must have been taking notes while Bhagwat spoke. If the questions came from journalists, the answers were really meant for the BJP. Already, it was clear that while the RSS had no love lost for Jaswant Singh, Arun Shourie’s diatribe belonged in a different category and there was little question of firm action against him. Once Bhagwat stopped talking, four senior BJP leaders promptly went to the RSS’s Delhi headquarters in Jhandewalan. The four—Deputy Leader of the Opposition Sushma Swaraj, former party president M Venkaiah Naidu, General Secretary Ananth Kumar and Leader of the Opposition in the Rajya Sabha Arun Jaitley—drove in one car to meet the Sarsanghchalak. They are now on the shortlist for party post vacancies that will arise from the departure of Advani and Rajnath Singh, since the purpose of the RSS chief’s exertions was to draw out a succession plan. But, sources add, instead of picking successors, Bhagwat bluntly told them that BJP leaders needed to stop fighting first. After this, the four of them met Advani to brief him.

The next morning, it was Advani who drove up to the RSS headquarters and met Bhagwat, who later chose to drive down to Advani’s bete noire Murli Manohar Joshi’s house, less than a kilometre away from the BJP’s national headquarters at Ashoka Road. In a string of meetings, Bhagwat, sometimes accompanied by other RSS leaders, met Advani, Joshi, Rajnath Singh, Naidu, Sushma Swaraj, Ananth Kumar, Jaitley and BJP vice president Mukhtar Abbas Naqvi. First-time MP Varun Gandhi also met Bhagwat. By the time the RSS chief left for Haridwar with other RSS leaders for the outfit’s national executive, he had met more than just a small gaggle of BJP leaders.

Obedience had been obtained.

Bhagwat has left BJP leaders with a list of do’s and don’ts as a warning and as consolation, a do-it-yourself-kit tuned to the RSS frequency for fixing the party’s mess. This is what sources privy to the meetings and some of the participants have told Open: the RSS wants BJP leaders to stop bickering in public view and show the discipline expected of the Sangh Parivar. It definitely wants a leadership change: a new party president and new Leader of the Opposition. The new president should be an organisation man with ‘pan-India appeal’ and acceptable to both Rajnath and Advani. While Rajnath’s term ends in December, Advani is to be given ‘an honourable exit’.

“The kind of mess the party is in right now has thrown up the need for a stronger central body,” says a source, “The RSS leadership is very keen that the BJP strengthen the parliamentary board by bringing in ruling chief ministers into it. They want the central leadership in New Delhi to be more representative in character.”

Interestingly, despite the formulae worked out by Bhagwat, the widespread perception within the RSS still is that the BJP will always be a faction-ridden organisation (the spoilt-by-power line of assessment). The factional tussles will only get increasingly bitter, they fear, and the RSS will find it difficult to keep tabs on any of it.

Still, the RSS is hoping that Bhagwat’s visit to Delhi, and all the finger wagging that was done therein, will have a lasting effect in restraining unruly behaviour. In fact, the BJP is expected to look different in some months from now, and behave differently as well. There is, though, some scepticism about the rescue plan even within the RSS. “Mohan Rao Bhagwat will soon realise that trying to sort out differences in the BJP is a futile exercise,” says the senior RSS leader from Nagpur, “The RSS has intervened in the past, but the political leadership of the BJP is still fighting.”

Vaidya, however, dismisses such talk. He says there is no question of unease in the relationship between the two. “The RSS accepts that there can be a difference in perception of the RSS and the Parivar institutions including the BJP,” Vaidya tells Open, “In 2002, when the RSS passed a resolution in support of the trifurcation of the State of Jammu & Kashmir, the BJP stated that the trifurcation was not to their liking. Difference of perception does not indicate souring of relations.”

The central dilemma, though, remains. How is the BJP to win votes on the appeal of Hindutva in a political arena that’s apathetic to ideological planks? The BJP’s educated professionals see development as an agenda with much better appeal. “When people are hungry, you talk development, not Hindutva or Ram Mandir. Advaniji’s Ram Mandir fixation is outdated in today’s Indian context,” says a BJP functionary.

But as Vaidya says, the present-day BJP is the new avatar of the former BJP. What the RSS expects from all Parivar organisations is a commitment to the concept of Hindu Rashtra or Hindutva, apart from a “spotless private and public character”. For the BJP, then, the agenda is set in stone. Whether this will get them anywhere is another matter altogether.