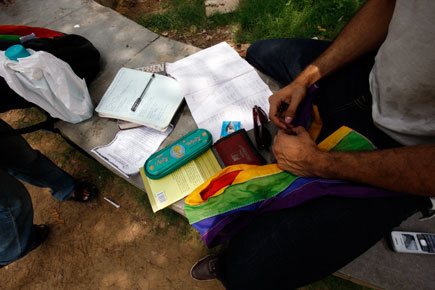 Wednesday’s Supreme Court verdict setting aside the path-breaking Delhi High Court judgment of 2009, which declared consensual sex between adults outside the purview of Section 377 of the Indian Penal Code, is an obvious affront to the rights of LGBTIQ (Lesbian Gay Bisexual Transgender Intersex and Queer) citizens of India. But there is something about this dark day that must be mourned by everyone.

First, the Delhi High Court judgment recognised not just the rights of LGBT citizens, but, for the first time, the Right to Sexuality of all Indian citizens. It had fallen to the Queer body to demonstrate the absurdity of denying something so basic to what it means to be human. But the judgment was a moment when the fundamental rights of all citizens to sexuality, to dignity, to a right against violence and discrimination, found expression. Today’s loss is not simply a loss for all LGBTIQ communities across the country; it is a loss for every citizen.

Second, this is a major setback in the development of a radical jurisprudence, of a relationship between law and justice. The Delhi High Court judgment is one of the richest pieces of jurisprudence we have seen in several decades. The very notion of a ‘constitutional morality’ identifying the essence of the Indian nation-state on principles of dignity and equality for all, for instance, had been a much needed innovation in legal thinking. Another key aspect of the 2009 judgment had been its development of an understanding of horizontal discrimination; that is, looking beyond discrimination in acts of the State and bringing into the realm of Constitutional concern the matter of societal discrimination. These principles are crucial to developing an understanding of the role of law in protecting the rights of minorities in the face of majoritarian aggression. The Delhi High Court judgment generated the conditions for developing a far more nuanced and radical legal landscape for the rights of all minority communities, whether based on religion, ethnicity, caste, or gender and sexuality. It is ironic, then, that the patriarchal articulations of some of these minority communities opposed the judgment. This ought to be a day of mourning for them as well.

We are seeing, in several parts of the world, a cynical appropriation of the discourse of sexual rights and sexuality by right-wing and reactionary agendas. In Western Europe, North America and Israel, we see the phenomenon of ‘homonationalism’, where LGBT discourse is being used in deeply racist—usually Islamophobic—groups. In East Africa, the question of sexuality has come to be the central question in discourse about the nation—where notions of ‘Africanness’ have come to be tied to a position on homosexuality. This centering of the question of sexuality is always a way of diverting attention from political and economic questions on the control of natural resources or instances of corruption.

In this context, the Delhi High Court judgment and the progressive actions of the state in the years since–such as the provision of three options of gender in formal documents of citizenship—have been a beacon of light representing the possibility of a truly progressive politics in a time of cynicism. The fact that ‘it could happen in India’ has been a source of inspiration for Queer groups the world over, especially in former British colonies. Expressions of shock, disappointment, mourning and solidarity flow in from all these parts of the world today.

Finally—and this is the crucial question for the future of Indian politics—the Supreme Court verdict sets the stage for a phase of fascism looming large over our political landscape. In the figure of Narendra Modi, we see the demand for a certain kind of love of the dictator, an erotic love. Women must love him, and men, be like him. There is something crucially gendered and sexualised about the kind of politics that centres around the charisma of a central figure. Along with this comes a very strict notion of the normative citizen, with very firm demands for particular types of masculinity and certain types of femininity.

In such a politics, the different aspects of our existence and identity—religion, gender, sexuality, caste, etcetera– are placed in a hierarchy of privilege and denial. There is an exclusion of all those who fall outside the space claimed as ‘the State’, and we are faced with the possibility of violence against those who do not fit our strict notions of citizenship.

There was perhaps never a time when the Supreme Court had such a pressing duty to stand up and firmly declare the centrality of dignity and diversity in our Constitutional make up. In its verdict of 11 December 2013, the Supreme Court has failed that duty—quite as dramatically as it did 37 years ago, when it might have averted the Emergency.

Akshay Khanna is an anthropologist at Institute of Development Studies, UK, and has been part of the Queer movement in India for 15 years