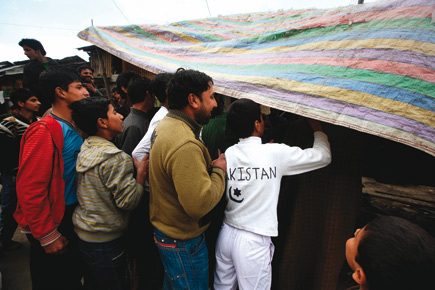 
“Off the record,” says the police officer in downtown Srinagar, as another round of kahwa and KrackJack biscuits arrive. He breaks into a smile, telling me that it is sometimes difficult being in uniform and being a son of the soil. It is the day after the India-Pakistan semifinal in Mohali—nothing seriously untoward has been reported in Srinagar, so there’s relief all around, and the curfew imposed the previous day has been lifted.

“You know these stone-pelters, these young boys, they start chanting things when they face the security forces. Funny things. But provocative.” He smiles again.

“We are on the side in uniform, with the CRPF. From the other side, they will sing ‘Bihari terisu-uu-rat! …aa-akthhooo!’ (Bihari, your sight I spit on!)”

Neither he, nor I, can help laugh—we forget for a moment that such a chant could be the prelude to a death from a teargas shell fired at a teenage head.

“In this situation, if the policemen (Kashmiris, mainly) laugh, the Central forces get angry. Obviously, they might react. There are so many things to control…”

Including laughter. I now understand the sign the CRPF has outside its camp next to Srinagar’s Sher-e-Kashmir Stadium, that spectacular ground surrounded by chinar trees, which has been in a state of constant repair for several years now. That sign starts with an instruction: ‘Don’t act funny…’

Malik Sajad’s cartoon in Greater Kashmir the day after the game—or the day of the ‘substantive talks’—had two crossed cricket bats labelled ‘India’ and ‘Pakistan’, and a skull rendered as a ball, labelled ‘Kashmir’.

Sajad said his cartoons are about Kashmir “carrying the burden of bitterness” between India and Pakistan.

Sajad is 23. He started drawing political cartoons at about the same age as boys start pelting stones these days—13 or 14. He got his break when he drew for the Sunday children’s supplements, stuff that was totally inappropriate. “They expected me to draw Mickey Mouse.” Instead, he dished out a visual on the robbery of Kashmir’s water and power.

At Kashmir’s largest circulated paper, they said his stuff belonged on the hard editorial pages.

“When you grow up with it, you know it,” says Sajad when I ask him whether he was mature enough to be a political cartoonist at the age of 14.

To those in downtown Srinagar, this is lived experience. Last year’s agitation started after a series of teen deaths at the hands of security forces. There was Wamiq Farooq (13) and Tufail Mattoo (17), and countless others who had died or disappeared. In Kashmir’s politics, there is neither an age when you retire, nor one when you can join.

My conversation with the policeman struck a serious note. He said the department had summoned about 150 ‘known stone-pelters’ a couple of months

ago. “They all turned up, in fact we could not accommodate all of them. Many of them thought they had been called for job interviews.”

This was a focus-group type exercise, alarmingly similar to what NGOs were doing in that area: giving young people the opportunity to discuss aspirations, problems; suggest solutions. I saw these neatly recorded on white flip charts. They want jobs. Social clubs. They want to take care of their parents. They want fewer uniforms on the streets—and fewer drug peddlers.

And somehow, the police, they think, can help. It has become the buffer force—taking responsibilities in areas well beyond law-and-order. The guys who get the jokes, but try not to laugh out loud.

Now that the semifinal was done and life had returned to ‘normal’, I headed back to Nawabazar. At Tasaduq Zargar’s electronic repairs shop, where I had watched the game with his passionate, profane friends. I found only the regulars. Tasaduq had also removed the refrigerator he had brought to the front of his shop to mount a TV for his roadside audience of cricket fans. It wouldn’t be required for an India-Sri Lanka final.

The previous day, they had flipped roles and asked me the questions. Whom did I support? Today, I ask them, “Why Pakistan?” “What do you gain?”

Wasim, a 19-year-old, says slightly naïvely that it’s because they are Muslim. What Muslims the Indian team has, it doesn’t treat well. Look at how the Pathans [brothers Irfan and Yusuf] were dropped, or Mohammad Kaif. And, of course, Kashmiri Muslims aren’t allowed anywhere near the squad.

Someone disagrees, says everyone forges his own future. A quarrel begins, ending with one man calling another an “Indian mule”.

The arguments are not particularly thought-through. But a J&K Premier League is in place. What if, I thought, an India captain with the right name emerged from it? How unanimous or divided would the referendum that an India-Pakistan game inevitably is in the Valley turn out under him?