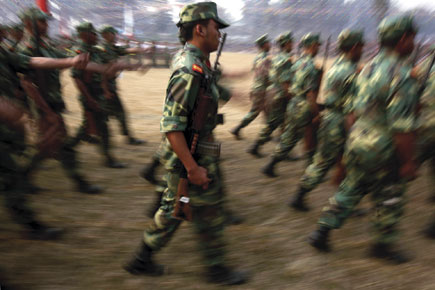 
On 17 February, two unexpected guests walked into a posh multiplex in the heart of Kathmandu. For the next two hours, Nepal’s top Maoist leader Pushpa Kamal Dahal (Prachanda) and his deputy Baburam Bhattarai sat glued to their chairs, watching their own life and the movement they created unfold on the screen. It was the premiere of Flames of Snow, a documentary film based on the Maoist movement in the country. The film tells the story, first, of Lakhan Thapa, the martyr of Nepal who was hanged in 1876 on charges of organising the peasantry to overthrow the monarchy. From there, the film crosses over to the genesis of the Maoist movement where Prachanda narrates his own story of how as a child he witnessed his father’s humiliation at the hands of landlords and the overall oppres­sion of farmers and other poor people in rural Nepal. After the film was over and the lights were switched on, Prachanda looked at the man behind the film, Anand Swaroop Verma, the Delhi-based activist and writer who has an impressive volume of work on Nepal Maoists, and told him: “I could not have imagined that one could so effectively tell the story of Nepal’s peoples’ movements—from Thapa till the recent overthrow of monarchy, all in two hours.”

Flames of Snow has been commercially released across 42 cinemas across Nepal, along with mainstream Bollywood films like 7 Khoon Maaf and Patiala House. The film is in Hindi and it will be soon dubbed in Nepalese, with English subtitles. Swaroop and filmmaker Ashish Srivastav (director) shot the film from 2005 to 2007. Though the Nepal Censor Board passed the film with one cut of a brief scene showing Palestinians burning Israeli and American flags, Swaroop had a rather difficult time getting it past Indian censors who maintained the film could incite sections of Indian society given that India now had a formidable Maoist movement. After deliberating for months, they passed the film, but with a disclaimer saying that the facts in the film had been compiled from various media reports.

The film contains extensive interviews with Maoist cadres, including Prachanda and Bhattarai, and uses explosive footage shot by Maoists of encounters between Maoists and government forces. It shows hundreds of Maoist soldiers marching cheerfully to battle zones while people look on. It also tells the story of the historic Gorkha jail break, where six female Maoist guerillas, led by commander Uma Bhujel, escaped from the prison by digging a tunnel across the jail wall. It portrays how many families put all their members in the line of fire by joining the Maoist move­ment that ultimately led to the overthrow of monarchy in the country—a truth that Prachanda acknowledges in the film.

Swaroop is, however, not sure how audiences in India would get to see it. “We could release it on DVD but I am worried that if this film is found in possession of a person in, say, Chhattisgarh or Jharkhand, he will be troubled no end and so will we,” he says. His apprehension is justified. If a few books on Marx and Lenin could enable the police to put so many people behind bars on charges of abetting Maoism, one can imagine how Flames of Snow could be used as ‘evidence’.